It has been snowing all week here, with just a few breaks in the action… so our world is a very pretty winter wonderland!  The first two days of snow were just around freezing so the snow was heavy and wet – snowmen cropped up all over town.  Thankfully the temps dropped a bit and now the snow is fluffy – much easier to shovel or sweep, and we have a little more time to get the accumulation off the very top of the boat before there’s a risk of warmer temps or rain which would increase the weight.

Of course school is still in session, though people were hoping for some cancellations so they can get more time to play in the white stuff – taking snow machines up on the logging roads, x-c skis or snow shoes out on the muskeg.  The weekend is almost here!

In the Lower 48 you have Groundhog Day, but up here today is Marmot Day.  Alaska likes to do its own thing.  People also have a good sense of humor about stuff like the tsunami warning last week. 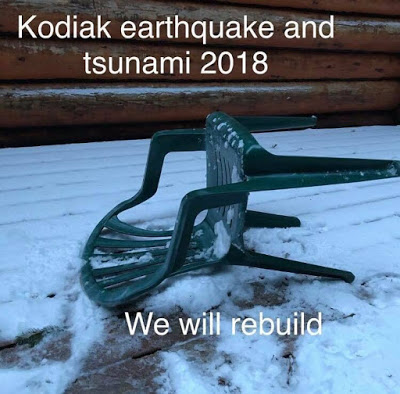 There has been a lot of discussion about the actual threat of tsunami this week, and the scientific consensus is that a big Pacific wave just can’t make its way back here to us.  On the other hand a big earthquake could loosen the face of the nearby Coastal Mountains, and if that happened we’d be inundated pretty quickly.

A senior meteorologist from NOAA’s Juneau weather service office gave a presentation Wednesday, and we discussed options for boaters.  Even the relatively narrow Frederick Sound close to us would be a safe place to escape a wave since water depth has a great deal to do with surviving a tsunami wave (if we could get out there in time).  Let’s hope we never have to find out personally.  Suffice it to say that the entire region is breathing a huge sigh of relief that the earthquake turned out to be the horizontal slip type – which doesn’t move much ocean water, rather than the kind that causes tsunami waves – and would have resulted in widespread loss of life in the outer coastal communities.

Short daylight and slippery walking makes it easier to hibernate in our snug boat and, in my case, knit like crazy.  I’ve been lazy and haven’t gotten out to photograph as much as I should… though I did get out to capture some of the long-tailed ducks behind the boat. 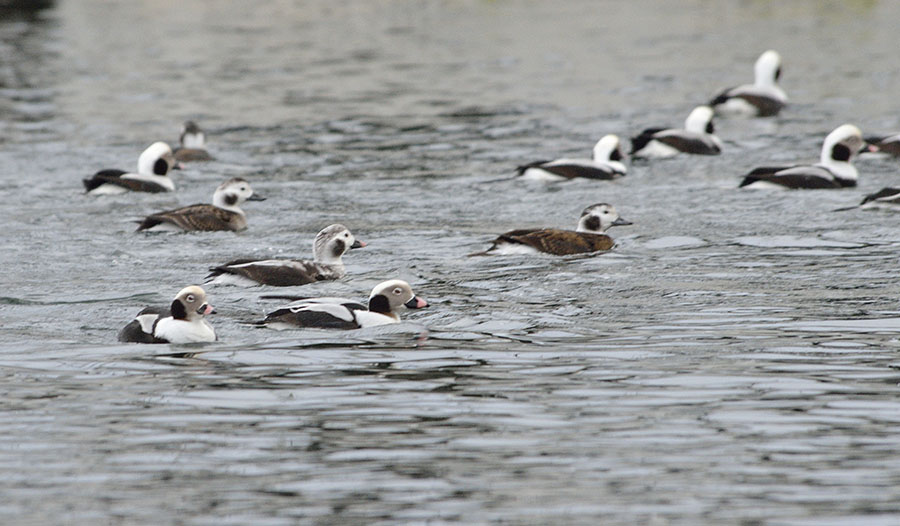 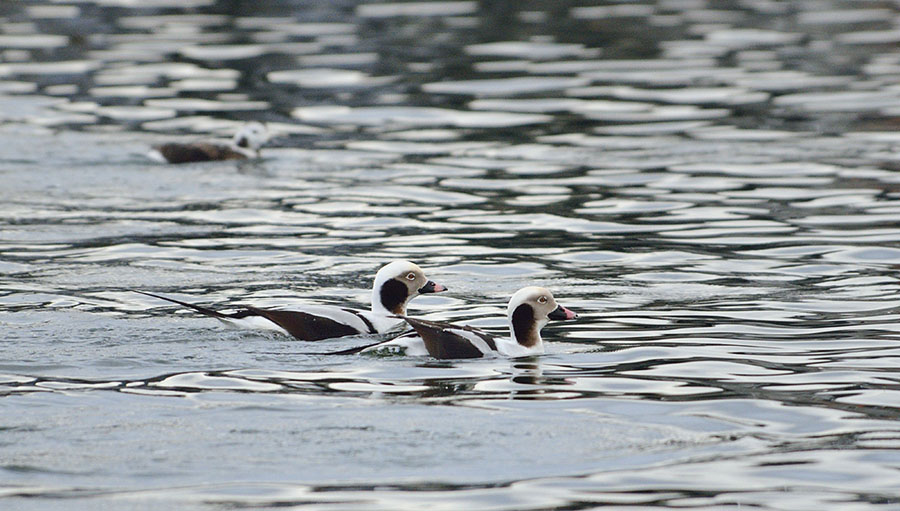 We’ve also had a lot of Pacific loons this winter – more than usual, and they look so different in their muted winter colors. 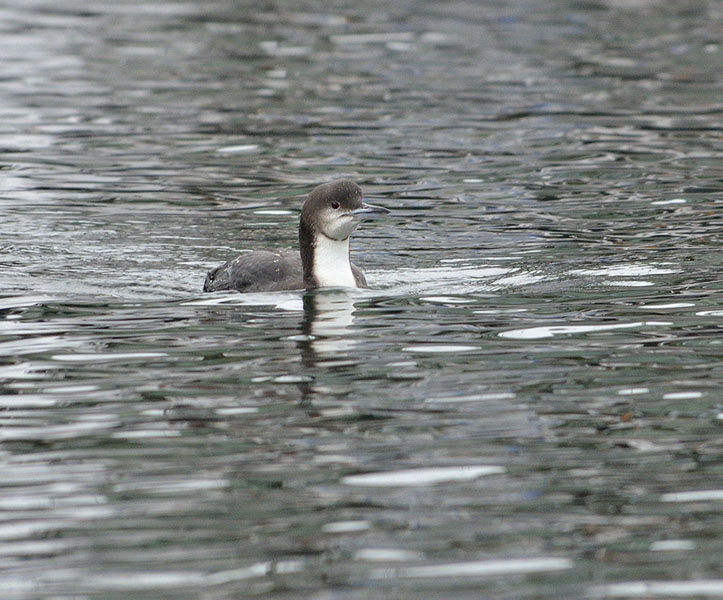 Mergansers and Barrow’s goldeneye, scoters and other diving ducks also fill the harbor, and the resident blue heron tends to sit on the far end of the dock hunkered down and looking less than pleased.  We don’t see the sea lions as much since the harbor is fairly quiet, but a friend watched a sea lion wrestle with a 70 lb. halibut the other day, folding it in half and making quite a meal of it.

I went over to Sandy Beach Park when the snow was fresh one morning, and found plenty of deer tracks.  Our friend who lives fairly close to the park reported finding moose tracks through his yard, and he spotted some very rare lynx tracks on a more remote piece of property along the Sound.  We may not get to see the critters, but the snow tells us a lot about what is moving around.  Moose coming this close to town is a real surprise.

The park has a “troll bridge” built in Scandinavian style, and it looks so pretty in the snow. 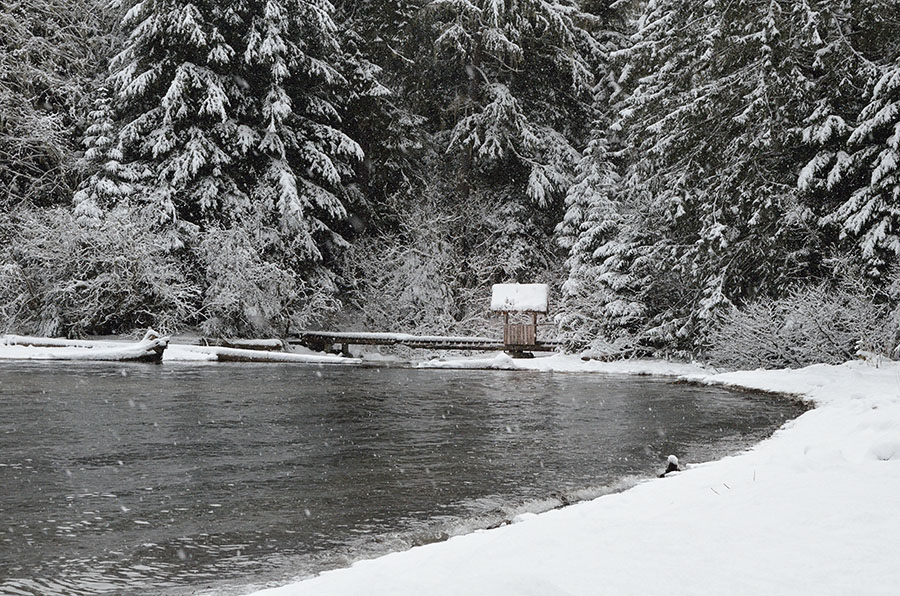 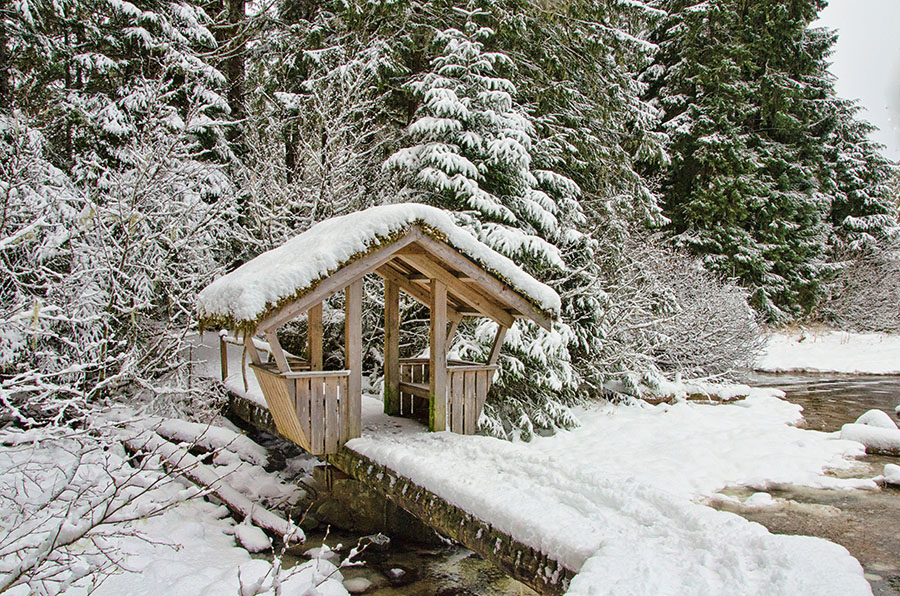 I paused at the point where the Wrangell Narrows meets Frederick Sound, and the views were sublime.  This is what we get to see every day, and we never get tired of the ever-changing beauty. 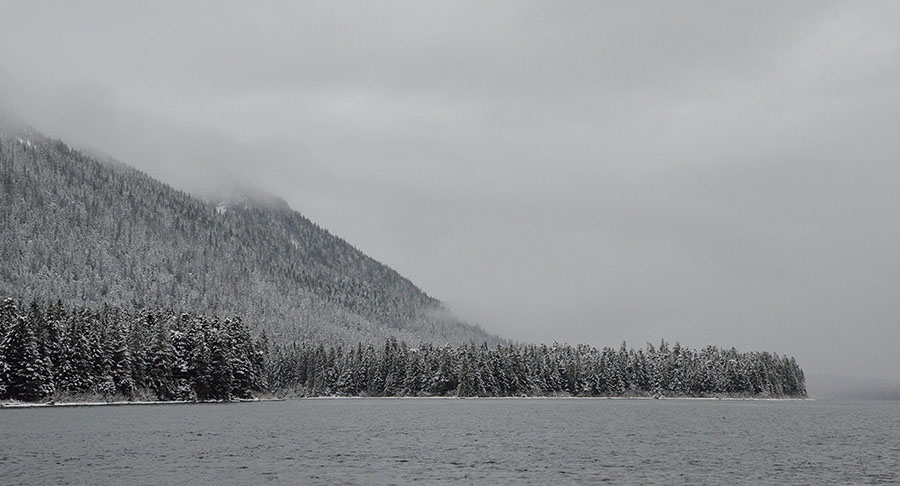 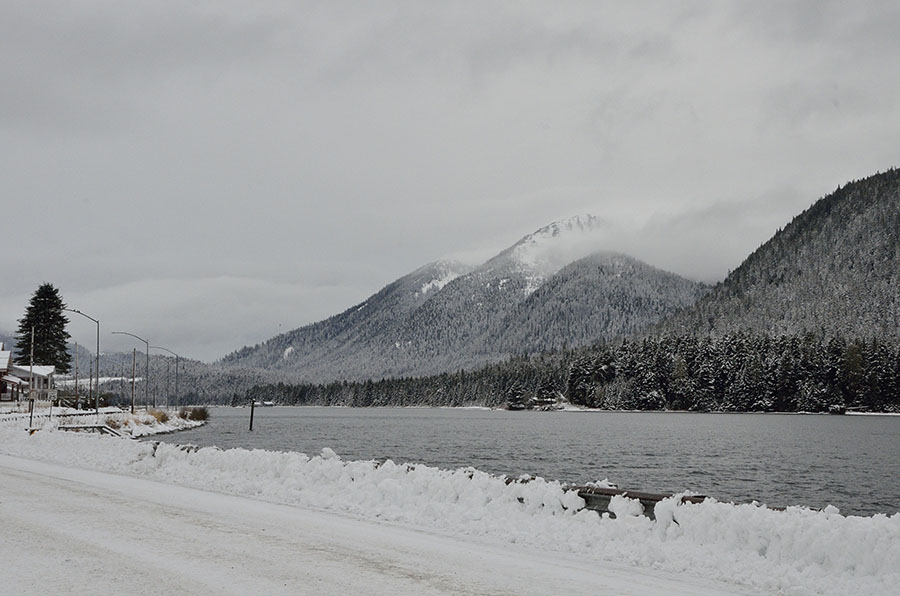 The community continues to keep busy with the “Meatball-palooza” pot luck last week, and the traditional Lutefisk Dinner at the Sons of Norway next week.  Four of our young men just earned their Eagle Scout medals – which is pretty impressive for a community of only 2500 people.  The high school play (a melodrama) had us rolling in the aisles last night, and the two teams our high school sends to the state-wide Ocean Science Bowl in Seward did a great job practicing their presentations for the town this week.