This post wraps up our adventures on Washington’s Olympic Peninsula and in the Olympic National Park.  The variety of land and seascapes really surprised us – there is so much more to see and do here than we expected, and we feel like we only just scratched the surface – we’ll be back.

Cape Flattery is the north and western-most point in the Continental U.S., and its beauty is rugged and windswept. 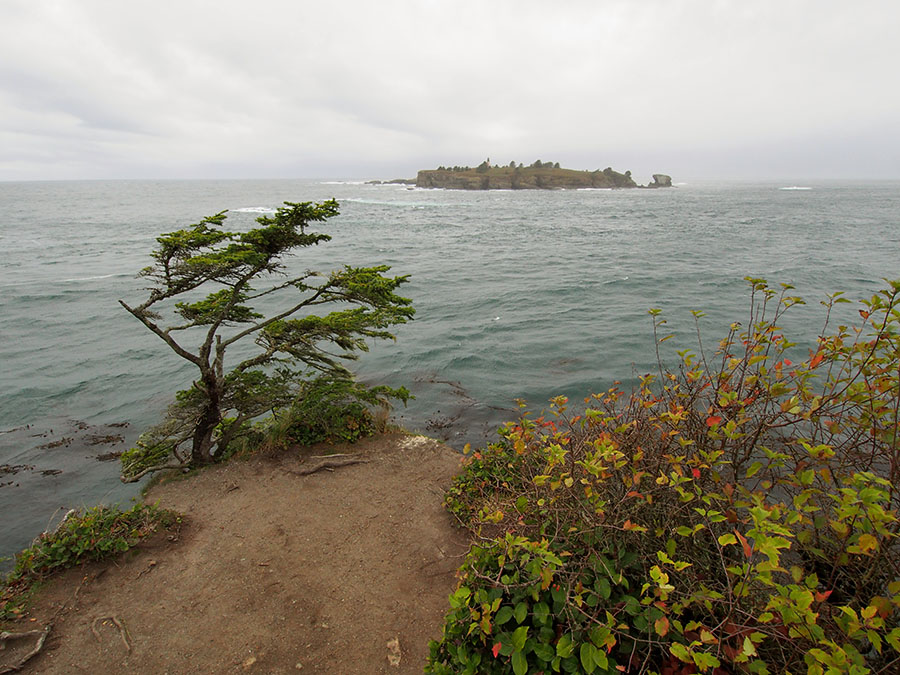 The area around Neah Bay and Cape Flattery is owned by the Makah Native People, and they have a cultural museum that’s worth checking out.  I don’t envy the fishermen and Coast Guard personnel who have to operate out of Neah Bay!

A little farther south we headed into the woods for the muddy hike to Shi Shi Beach, also owned by the Makah People.  We read different estimates of the trail’s length, and we had to keep moving since the day was getting late and we didn’t want to end up hiking the few miles back in the dark.  The forest was so pretty though, with the late day light filtering through the trees. 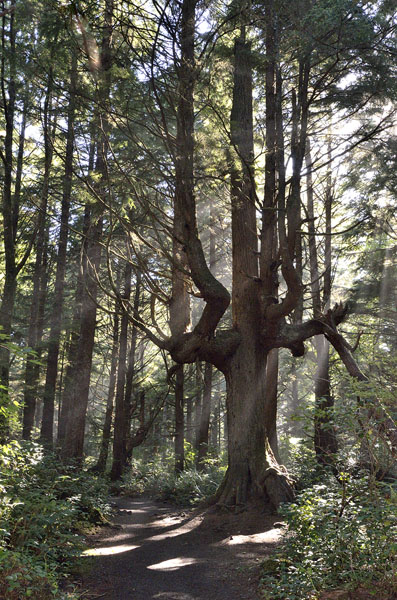 We eventually came to the overlook above Shi Shi Beach, and we didn’t realize that we’d have to climb a couple of hundred feet down (and back up)… so we decided to savor the beach from the viewpoint, and tackle the hike down another time. 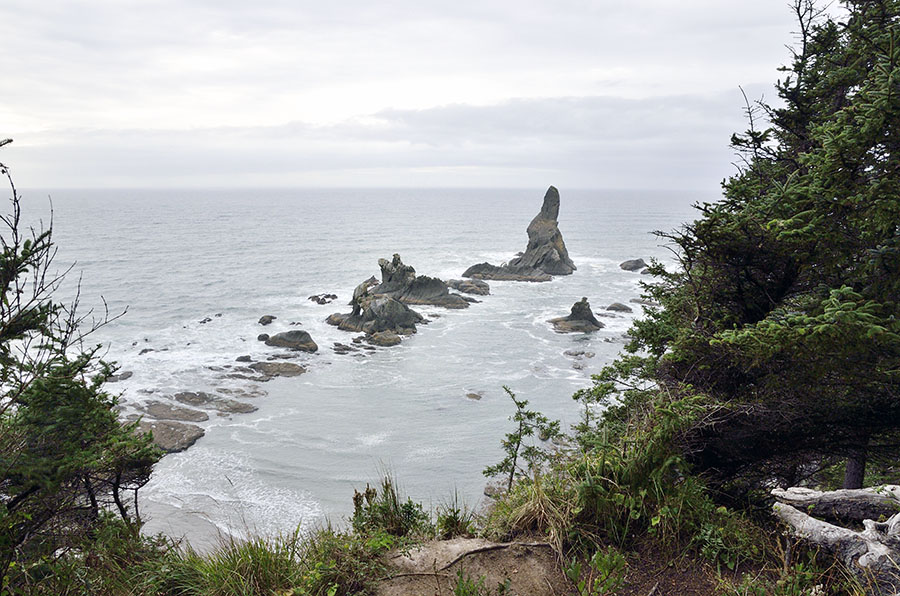 The spires out in the water are called “sea stacks”, and they’re found in many places along this rugged coastline.

The next day we headed out to explore more of the famous beaches, starting with the rock-strewn Rialto Beach near La Push, WA. 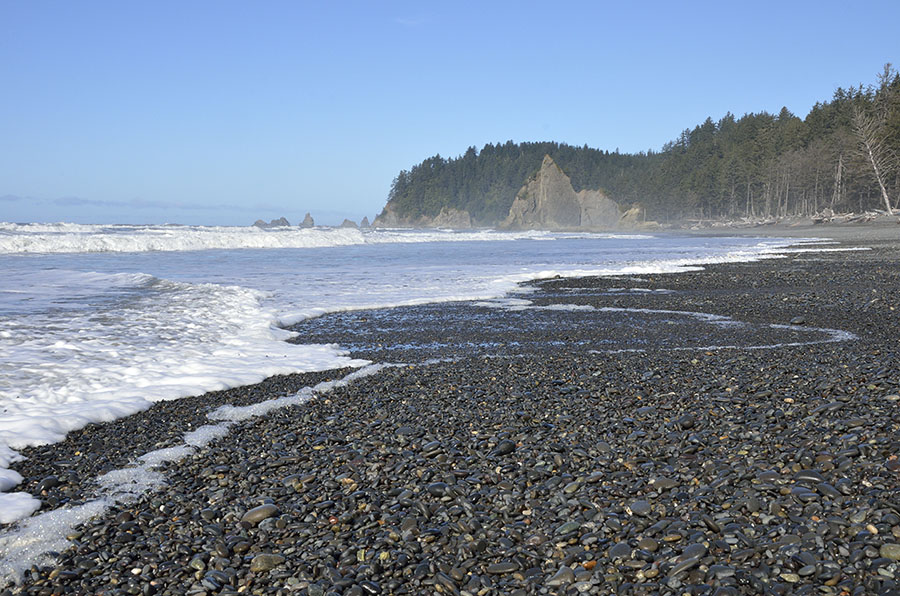 If you love to pick up beautiful rocks, you’ll make yourself crazy here! 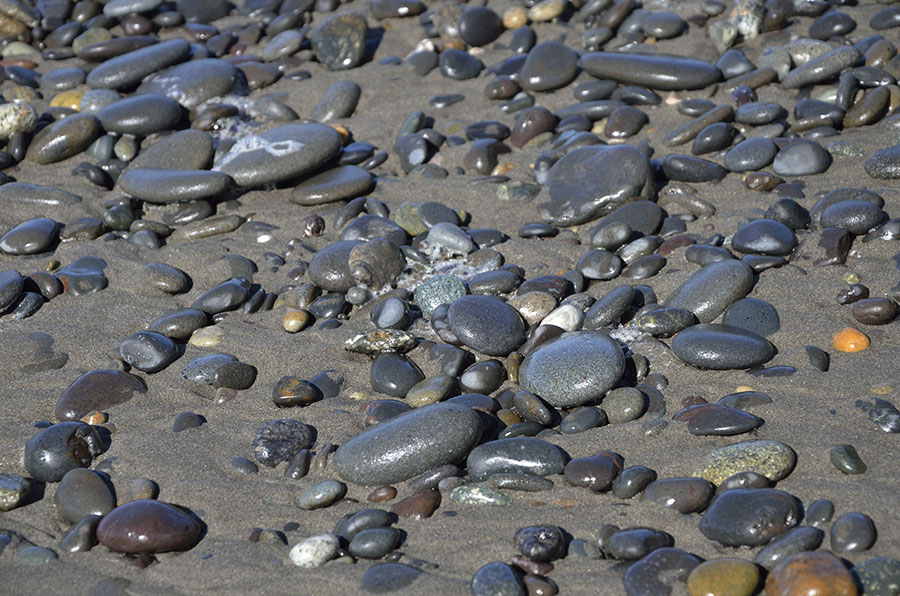 The ocean-tumbled rocks came in a wide variety of colors and patterns, big and small.  Besides the urge to stop and pick up rocks with every step, it was difficult to walk on the thick layer of rocks.  We couldn’t waste too much time since we wanted to make it out to see the Hole In The Wall before the tide came back in. 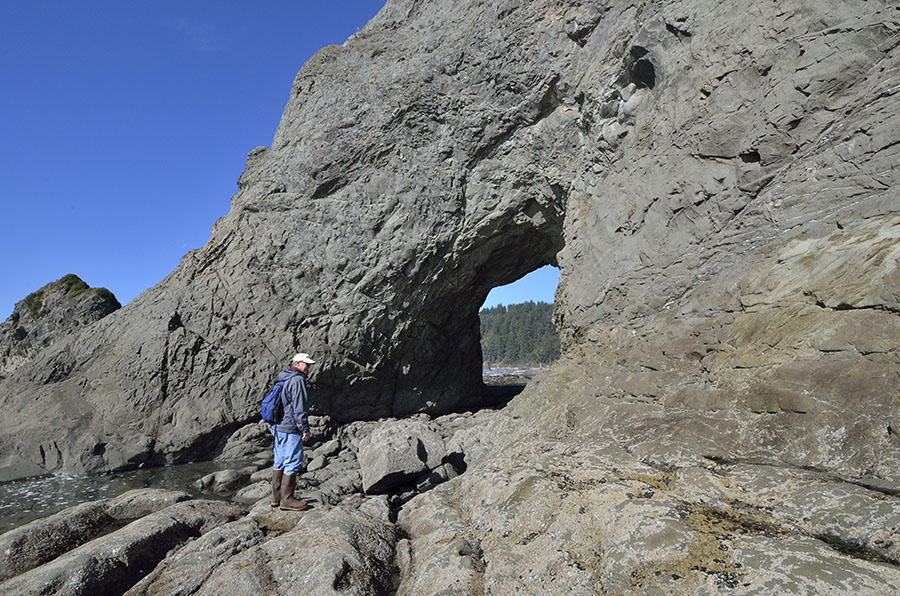 There were plenty of anemones and tiny sea creatures in the tide pools, and we were smart to wear our tall rubber boots since we lingered just a bit too long and would have gotten wet without them.

Besides the rocks, the beach was littered with massive logs flung ashore by the sea, some with roots that were quite large.  Can you spot Jim in the picture? 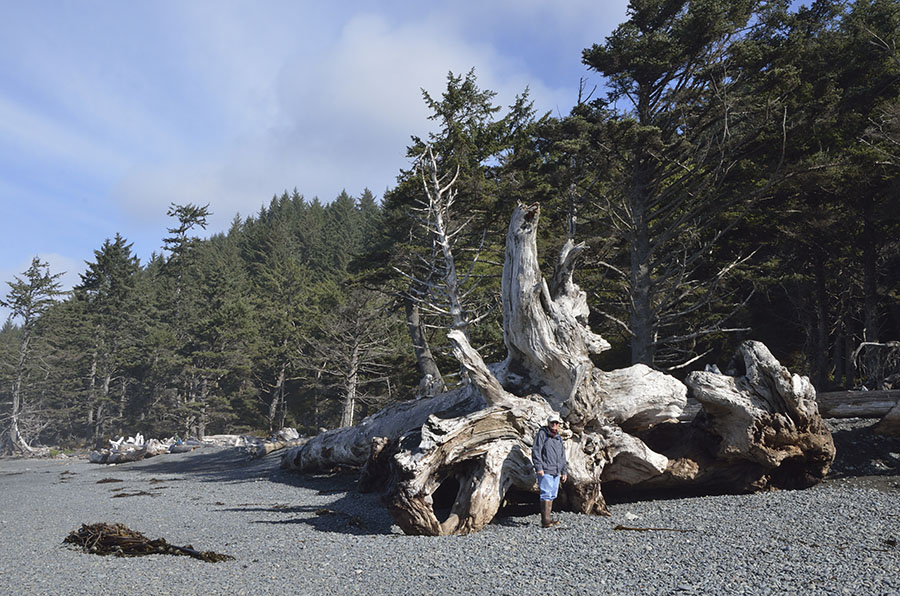 And then we found this “dragon” on the beach…  pretty cool. 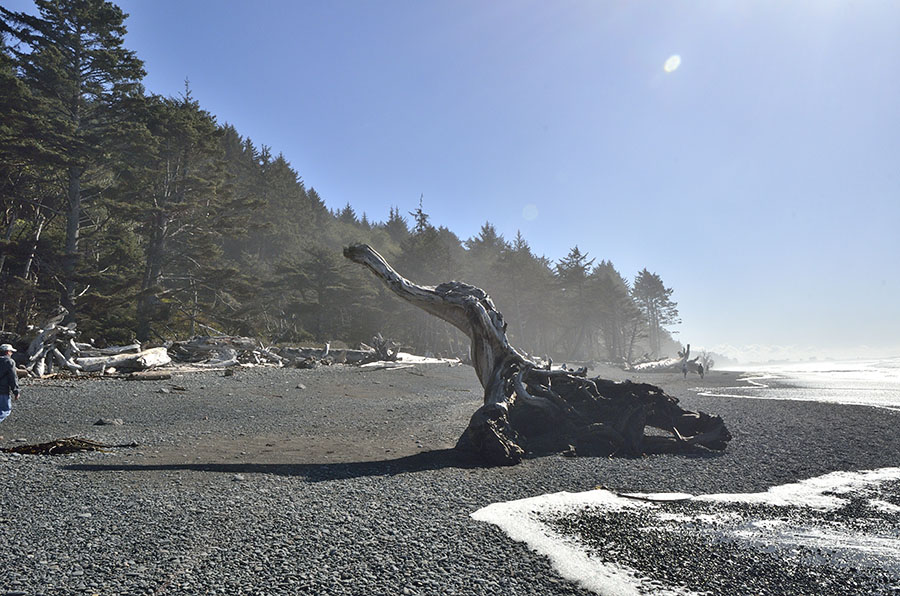 Our pockets were rattling, full of rocky treasures as we made our way across the beach and back to the truck.  The constantly crashing surf left a lingering salty haze in the air, and the cobble glistened in the afternoon sunlight. 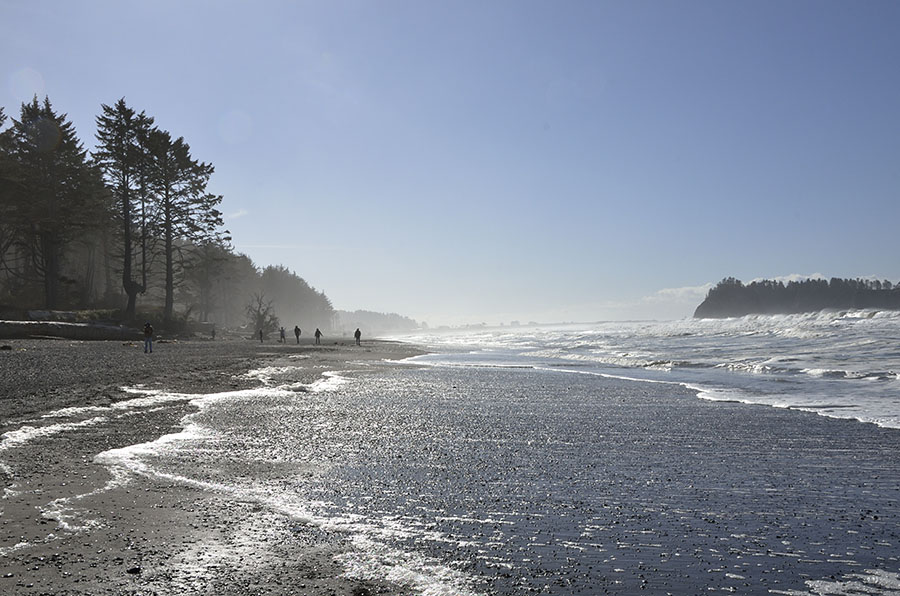 We explored farther down the coast, stopping for a hike to Second Beach.  (Yes, there’s a First and a Third Beach too and some others with more interesting names…  but we didn’t have time to do them all.)  Second Beach was very different than Rialto in that it was just smooth sand with just a handful of rocks. 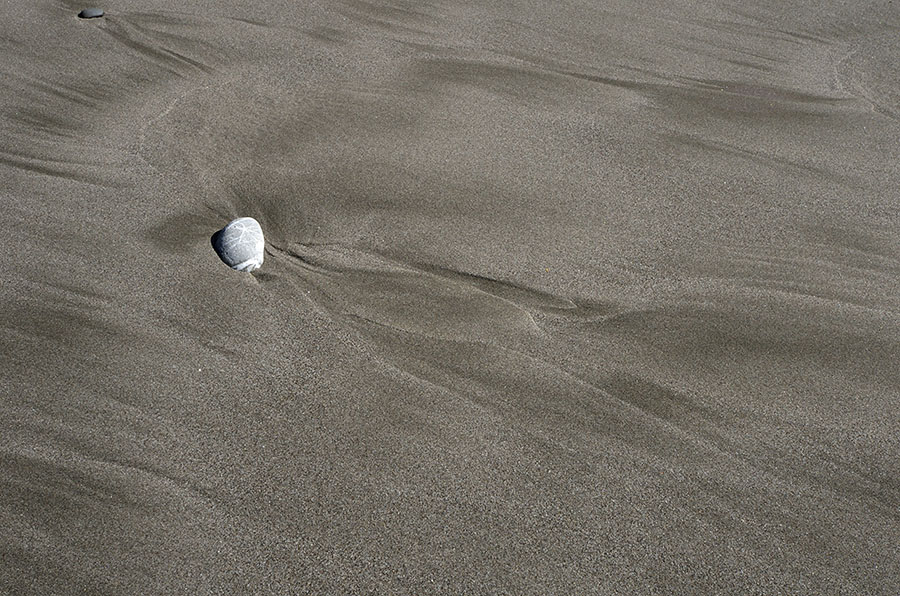 We hiked through some pretty forest, then down a steep trail, and then climbed carefully over this massive tangle of logs to finally reach the beach. 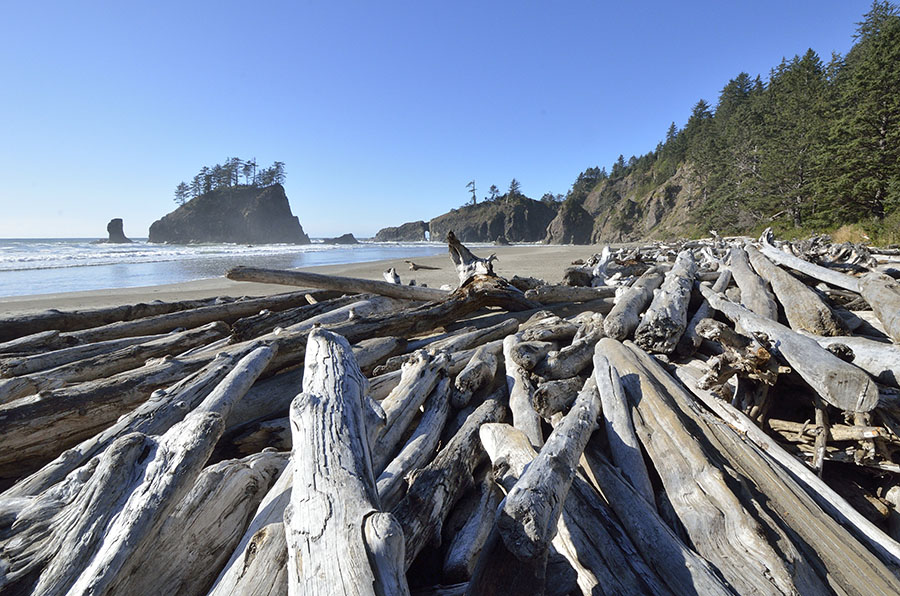 Second beach also had a “hole” in the protruding rocks, but the tide was too high for us to get close to it. 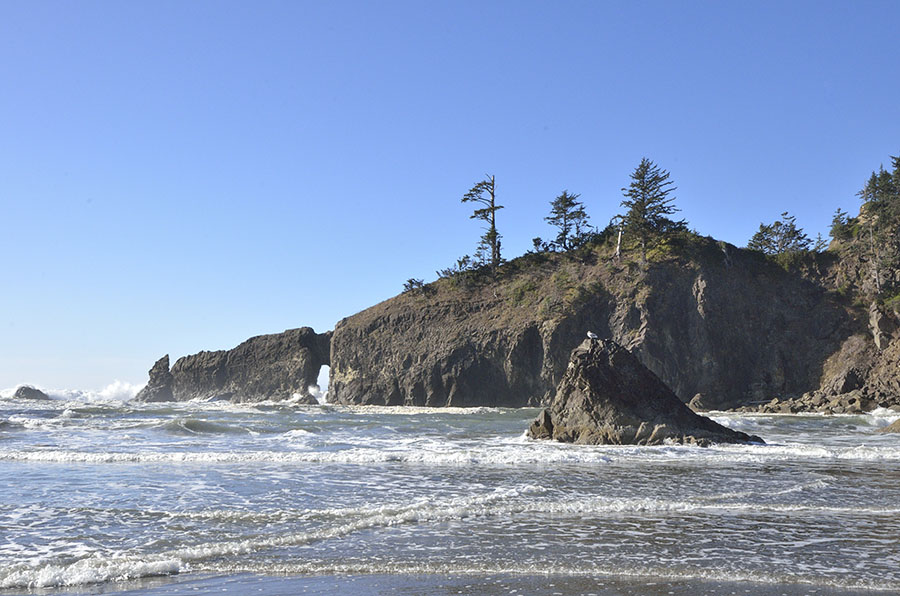 By the time we got there, the waves were crashing through it – pretty neat! 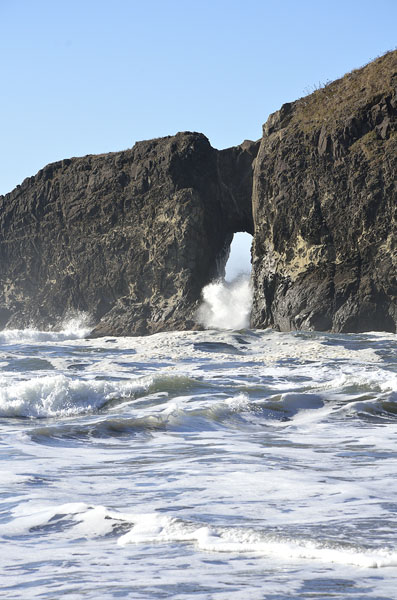 That finishes the highlights of our exploration on the Olympic Peninsula.  Now we’re back home in Petersburg where holiday preparations are well underway.  Stay tuned for scenes of some of the many festivities here in Alaska’s Little Norway – about the best place in the world to celebrate Christmas.