Cruising in southeast Alaska offers such a variety of things to see – you can find something interesting at every turn.

We returned to Funter Bay on the northern end of Admiralty Island – a place full of history from its time as a mining camp, a cannery, and the temporary home of some Aleutian islanders during World War II.  The story of the islanders is the tragic story, as they were quickly relocated from their villages, watching as the US Army set fire to their homes to eliminate any useful infrastructure in case the Japanese invaded more of the Aleutian Islands.  These islanders were relocated to various places in southeast Alaska – a climate and terrain that’s very different from what they were accustomed to, and they were dumped ashore with little help.  The group left in Funter Bay had to use the abandoned cannery buildings as shelter, lacking heat and ready access to fresh water.  Disease took many of these displaced Alaskans, and the cemetery in the forest in Funter Bay remains as a somber reminder of the hardship these innocent souls had to face. 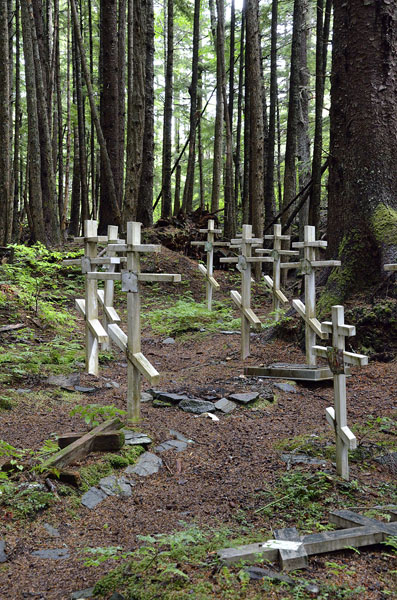 Despite the fact that the families of those buried in this cemetery live very far away, many of the graves are obviously tended. 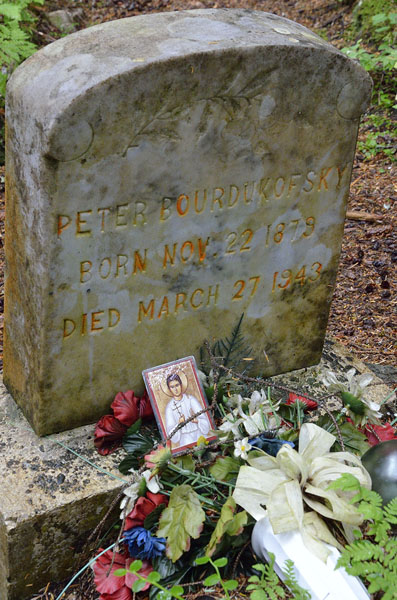 There is beauty to lighten the heart after thinking about the sad history of Funter Bay with lots of wildflowers in bloom – lupine, fireweed, and wild iris. 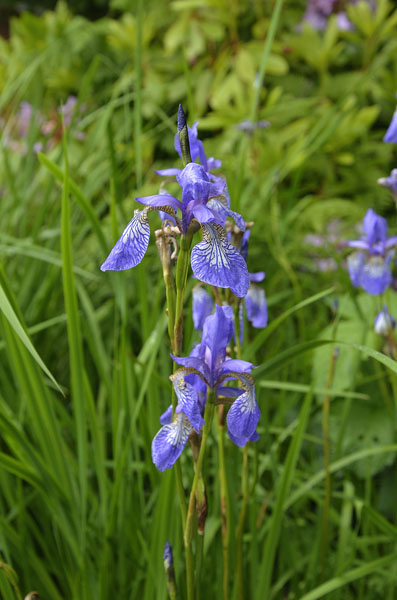 (As usual the blog lags behind reality…)  We headed to Hoonah to celebrate July 4th since we know the community has a parade and fireworks and other fun things going on.  The weather wasn’t the nicest which dampened the festivities a little bit, but Jim dressed ADVENTURES in proper nautical flags (sequenced as specified in Chapman’s book of Seamanship) for the occasion. 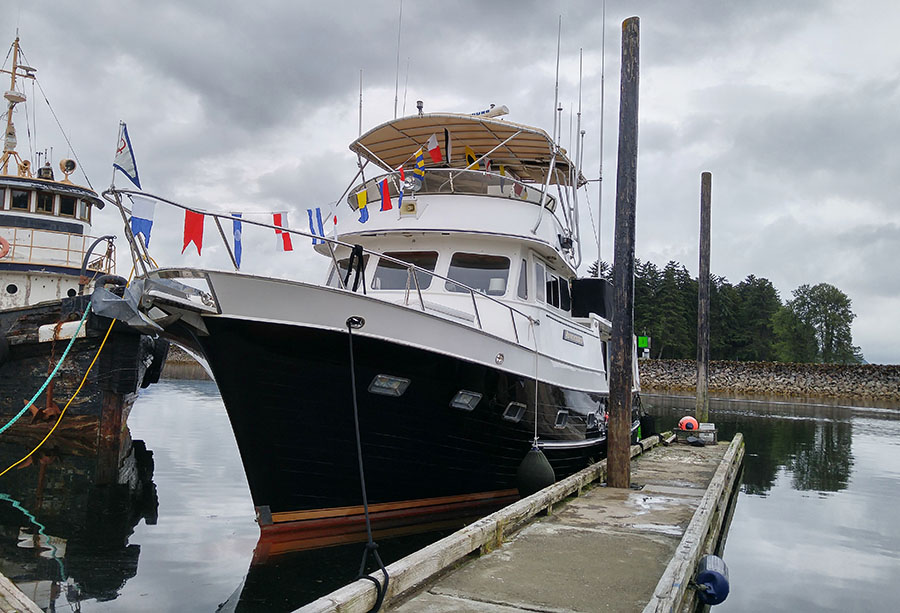 There were a handful of street booths and some children’s games throughout the day, and the parade was small but fun…  led by Hoonah Police and a color guard of proud veterans… 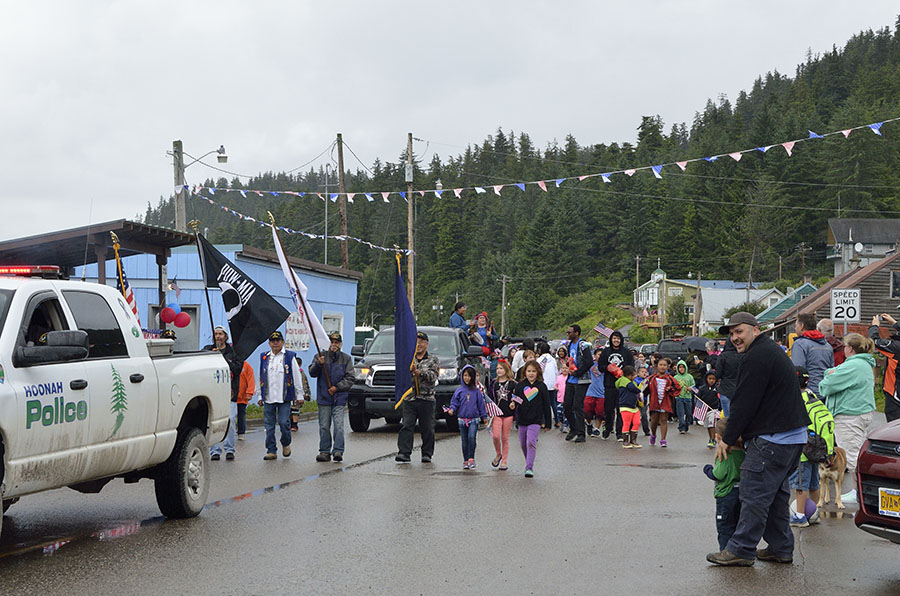 The paraders were tossing candy into the street, though you had to pick it up pretty quickly so it didn’t get too soggy.  Hoonah is a Tlingit town so of course there were some drummers… 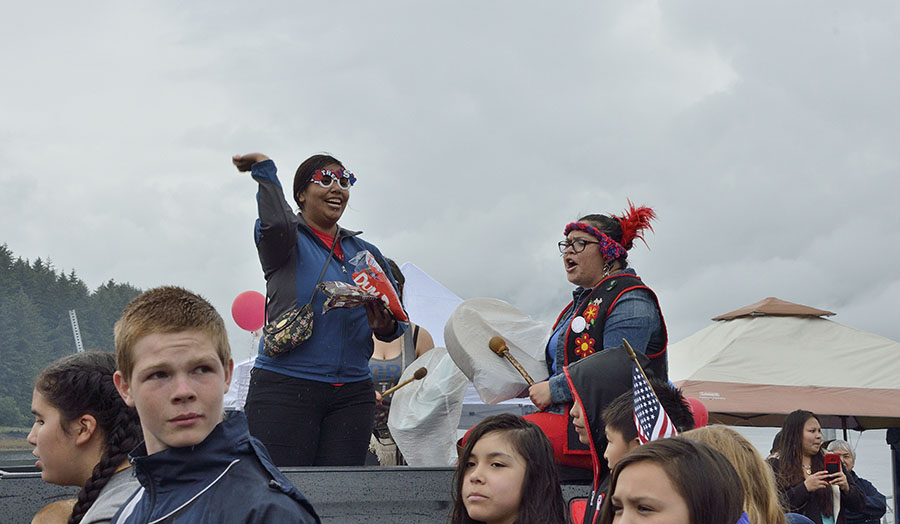 …and lots of children, some on their decorated bikes with playing cards in the spokes to make noise – a happy memory from my own childhood (which, some would point out, that I have not really outgrown). 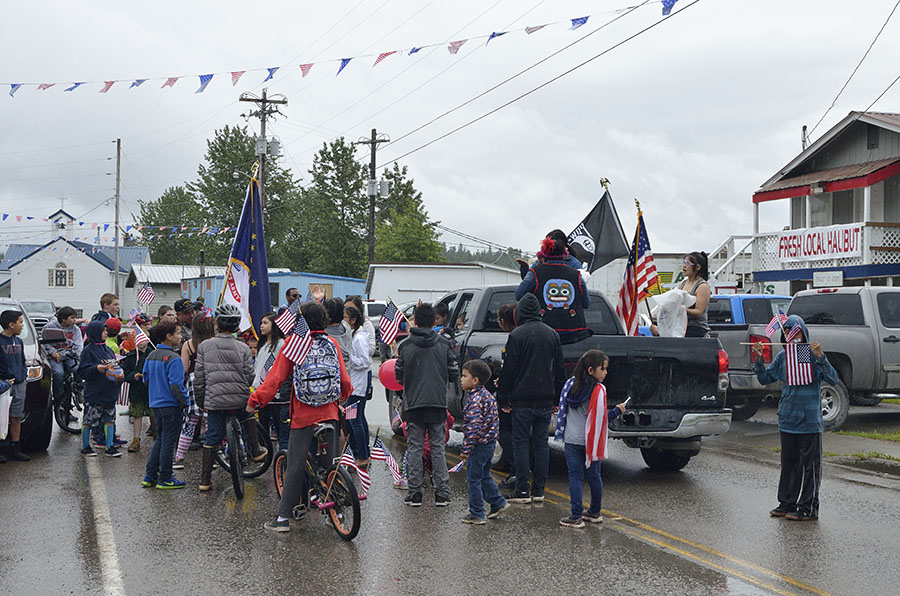 Small town America, with families gathering together for picnics and BBQs and welcoming friends – old and new.  There were fireworks two nights in a row – quite a long show, which we watched from the pilothouse since it was drizzly and quite late.  It’s not quite as dark as you’d like it for fireworks by 11pm, but that’s about as late as everyone is willing to stay up!

The eagles and ravens were still plentiful in town, though the whale that had been feeding regularly outside of the harbor breakwater had moved on.  We spotted two little scraggly eaglet heads peeking above the edge of the nest a few times – a happy sight.  And I happened to have my camera in hand walking back to the dock one afternoon when I spotted this raven perched on the railing.  He let me get relatively close, and I just loved his expressiveness. 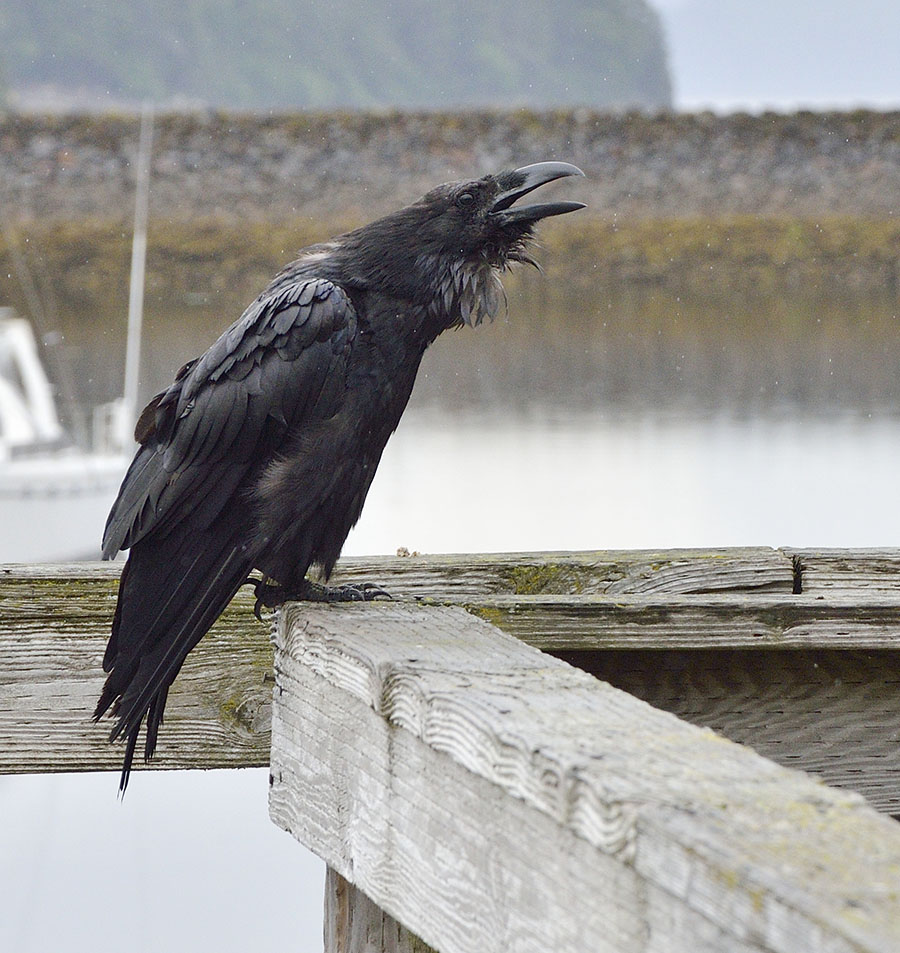 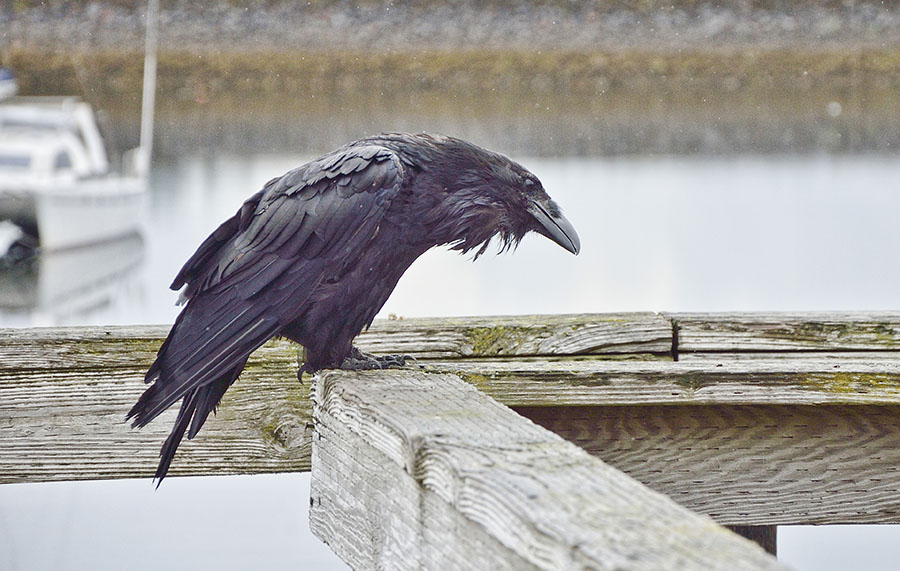 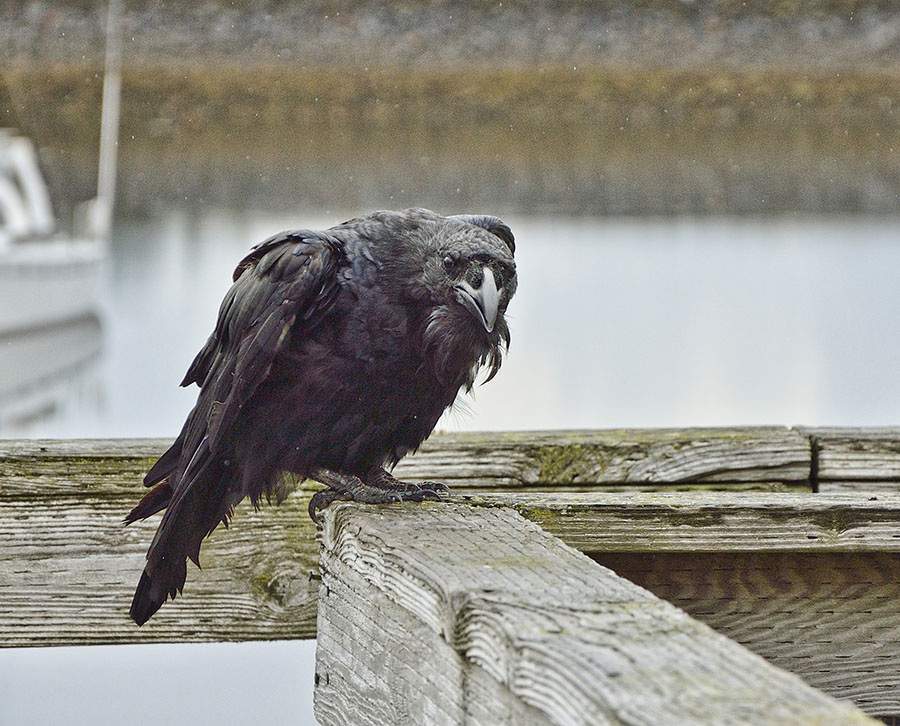 We always have a good time in Hoonah but it was time to move on.  We continued to be hopeful that the weather in the ocean would start to settle down so we could have good conditions to explore the outside coast of Chichagof Island.  We headed to Dundas Bay, next to Glacier Bay to sit out a few days of miserable weather and see if things would improve.  Along the way we ran into a sea lion that seemed to be as curious about us as we were about him since he hung around letting us take photos from a pretty short distance.  He gave us a few good looks – I think this was his best side… 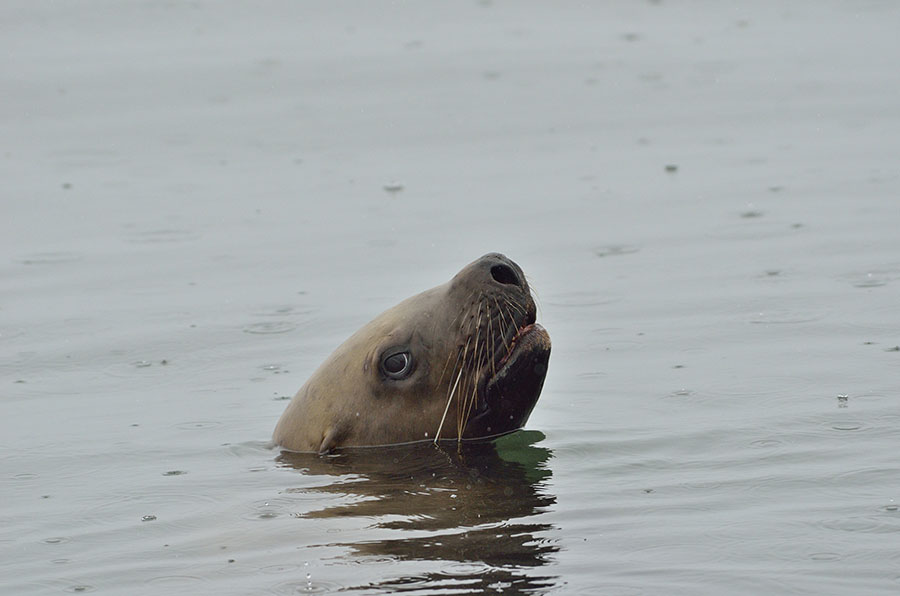 …and an otter had to do his “cute” act to try and convince us that he’s not a voracious predator that decimates everything on the bottom.  “Who, me???” 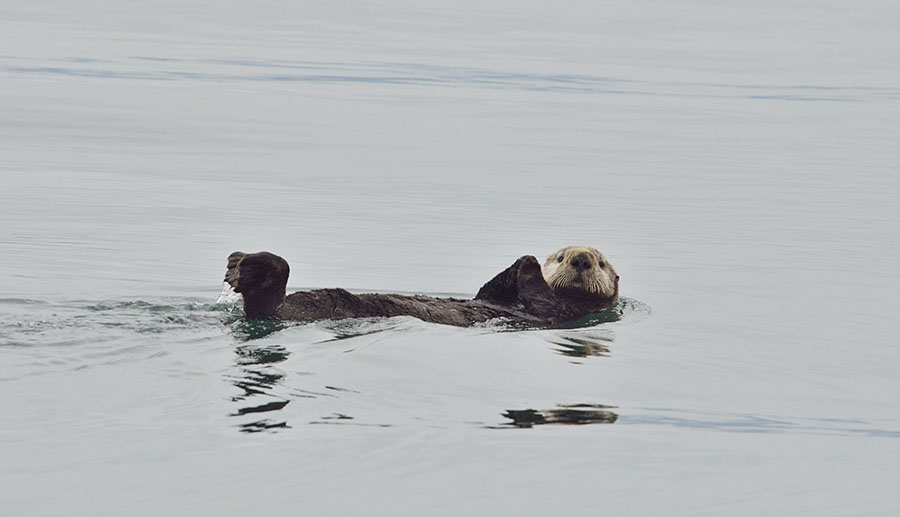 Dundas Bay is a remote place that isn’t often visited – which is our idea of a perfect place.  Even in really rainy crummy weather it’s beautiful – misty and mysterious.  During the one brief lull in the rain in our three day stay I was able to get out on the kayak, hoping to see more of the orcas that we got a brief glimpse of when we were heading into anchor.  I spotted lots of pelagic cormorants, a few more otters, lots of gulls, kittiwakes and arctic terns, but no orcas.  The bigger waterfall was loud, even at a distance… 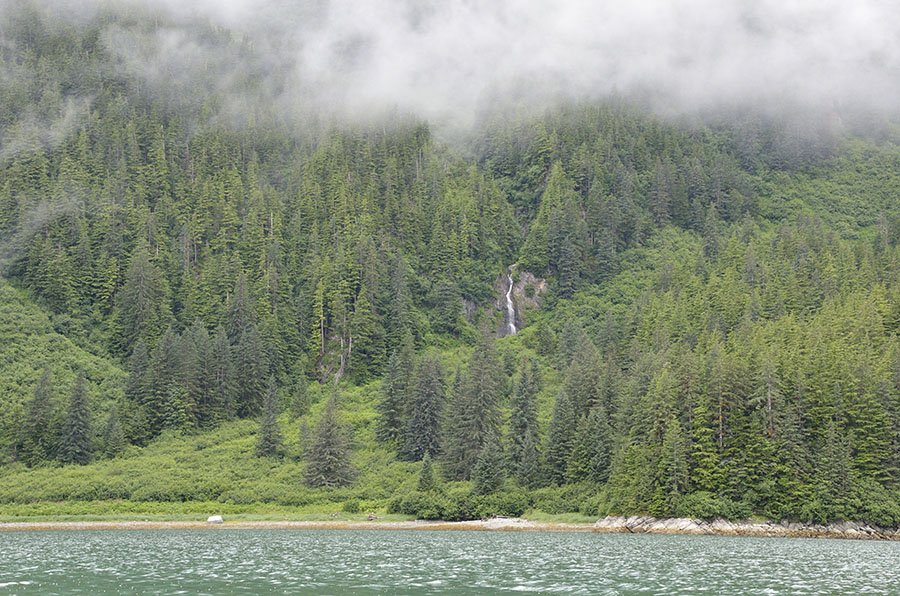 …and the mist clung to the trees in layers, hiding the steep mountains all around. 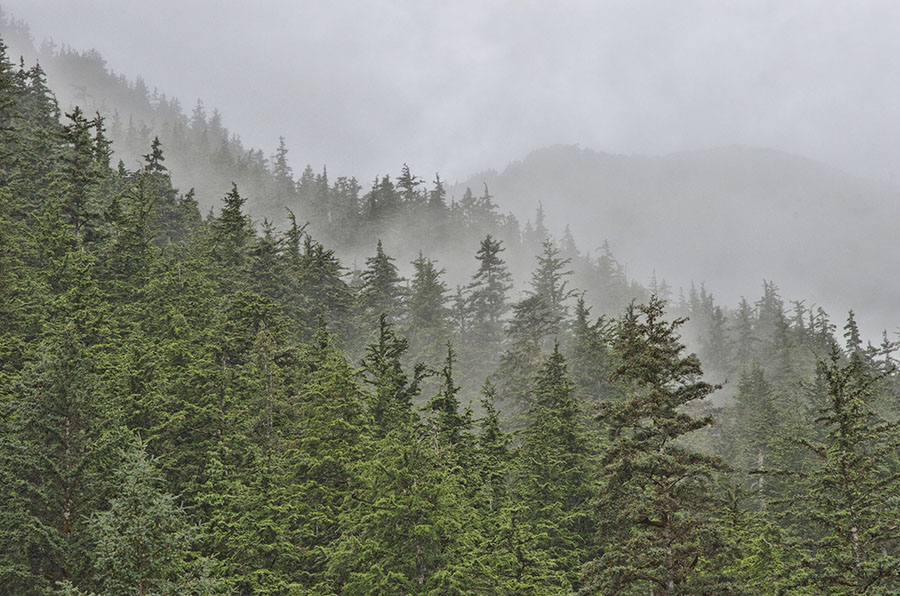 It was raining again and I had to paddle against the wind to get back to the boat, but on the way I saw what I thought was a tree in the water… upon closer inspection through the long lens it turned out to be a rock reef that was uncovering in the falling tide and a collection of harbor seals hauled on it.  I wonder where they go when the tide is high?