After the intense experiences in Glacier Bay we usually like to spend a few days in Hoonah decompressing (as well as doing laundry and a little grocery shopping).  We’re getting to know more people in town so it’s fun to catch up with what’s gone on over the winter.  And of course we have to spend time with the Tlingit carvers who created the magnificent Tribal House, and who continue to work on smaller projects for it.  The latest project is a “healing” totem pole, to be erected at the head of the dock in Glacier Bay.  It’s a pole that the carvers proposed to the Park Service several years ago, to tell the story of how the land was originally the “food basket” for the Huna Tlingit people, then the glacier came (in the 1750 little ice age) and pushed them out, then how the government took over the land, the difficulties and misunderstandings between the Park Service and the Huna, and finally the raising up of the Tribal House in an act of partnership.  It’s an important story to tell, and the current chapter has a happy ending… though the story in between has the important lessons that will hopefully not be repeated. 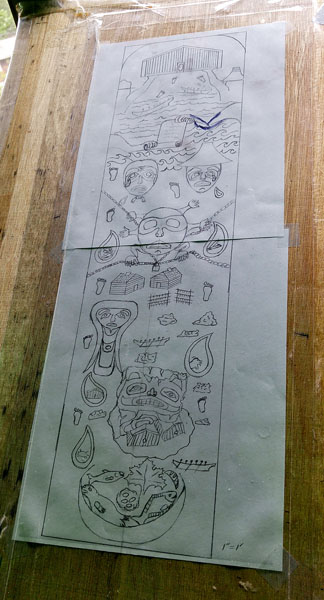 The carvers are making progress on the pole – a massive yellow cedar log, and the drawing above is a rough sketch of the details.  The footsteps are those of the Huna’s ancestors, and the teardrops each contain a depiction of an animal or resource.  You can guess what the ugly face with many grabbing hands and chains represents.  It took the Park Service a long while to agree to this pole, and accepting their part in the story is a good sign of true healing.

The log canoes built for the dedication ceremony last year are now seeing lots of use when cruise ships visit the town – demonstrating and taking visitors out for a paddle. 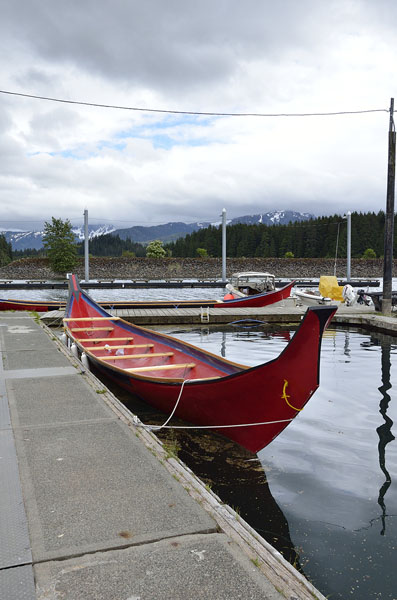 So the title promised some excitement, and here are the stories. First we encountered a whale bubble net feeding right in front of the entrance to the harbor breakwater.  We heard that he had been there on and off for a few weeks.  What a show!  But at some point we needed to get into the harbor, so after watching his pattern for a while I knew I could get by when he did a deep dive.  We made our entry, but another boat failed to watch the whale’s pattern and the whale almost came up under the bow of the other boat!

The second bit of excitement was that there was a bear in town.  Normally we don’t carry our bear spray when we’re going to the post office, but we should have… we just hadn’t heard the news. 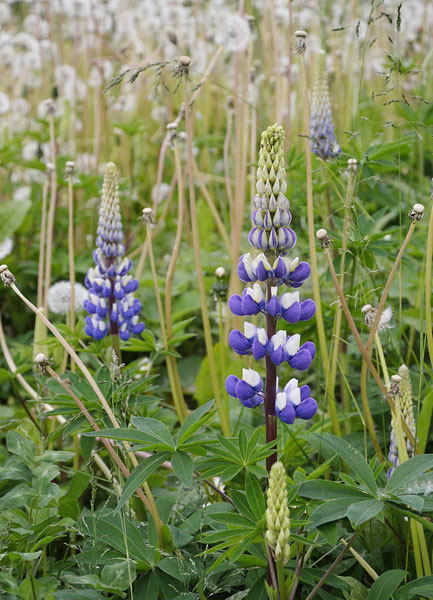 The day before a large grumpy boar (male) brown bear came down off the mountain and was wandering around the post office and airport end of town.  Now, this isn’t a very big town, and the airport isn’t more than a mile and half from the harbor.  The police went and shot off some noisemakers to encourage the bear away from populated areas, but no one had seen him the next day.  A local insisted on giving us a ride back to the harbor just to be safe.  Reports of the bear quieted down, but we still needed to pick up our mail so Jim went back up there the following day with bear spray in hand.  Our mail was in, and there was no bear – success!

While Jim opened mail I headed out with my camera to photograph the eagle sitting on a nest near the harbor.  I didn’t see the eaglet, but friends told me there is one in that deep nest. 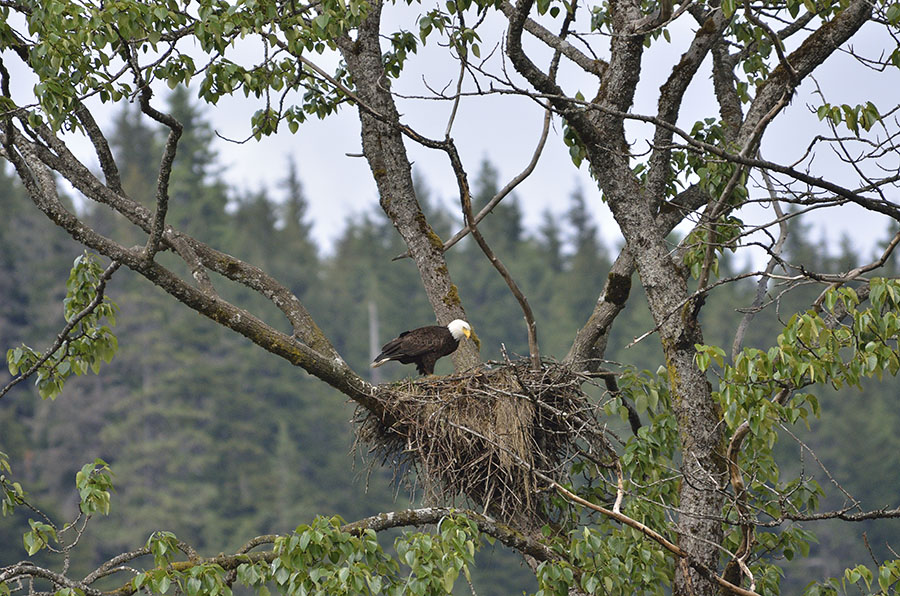 Meanwhile, a normally noisy and hyperactive kingfisher perched on a wire right overhead as I walked out the dock.  She posed and stayed still for me, and let me get nice and close. 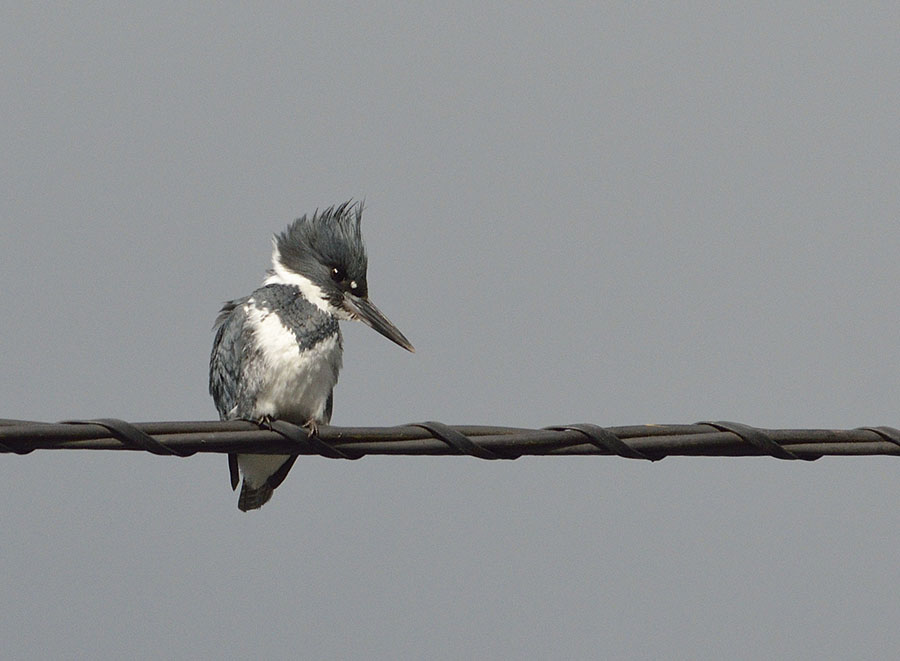 Then I walked to the breakwater to see if the whale might be back feeding.  I didn’t get any photos of him the first time because I was busy driving the boat.  The whale wasn’t there, but the bald eagles were gathering and fussing over some snapper carcasses.  I counted at least 24 adults and juveniles at one point.  They were close by, swooping and screeching at each other – yowza! 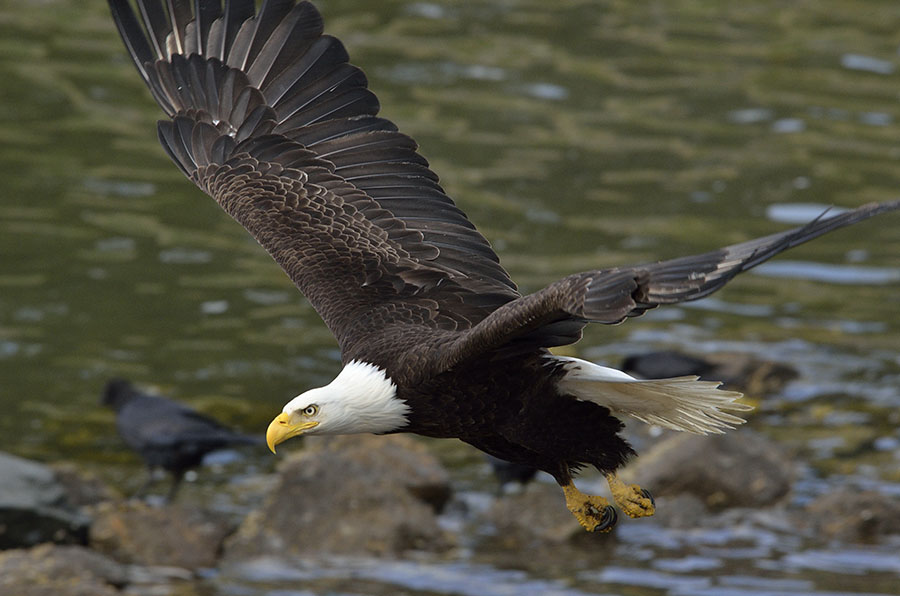 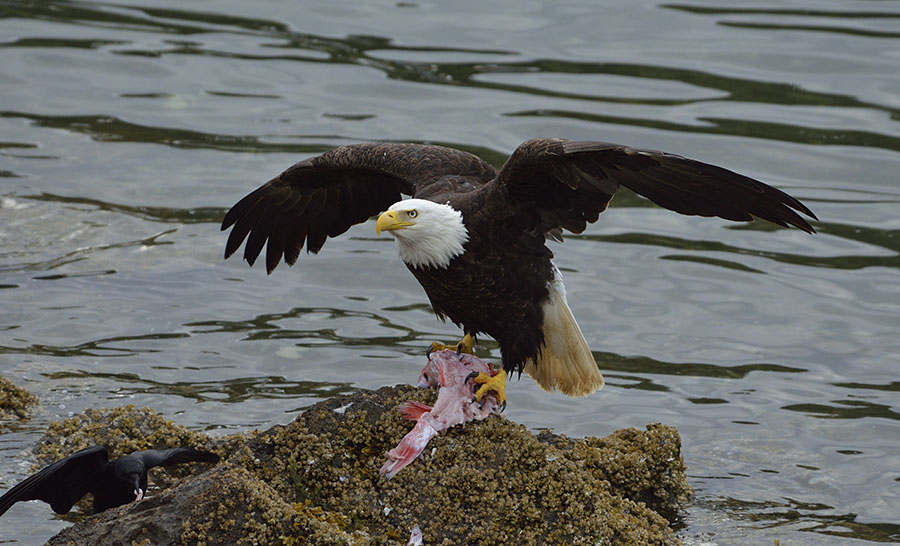 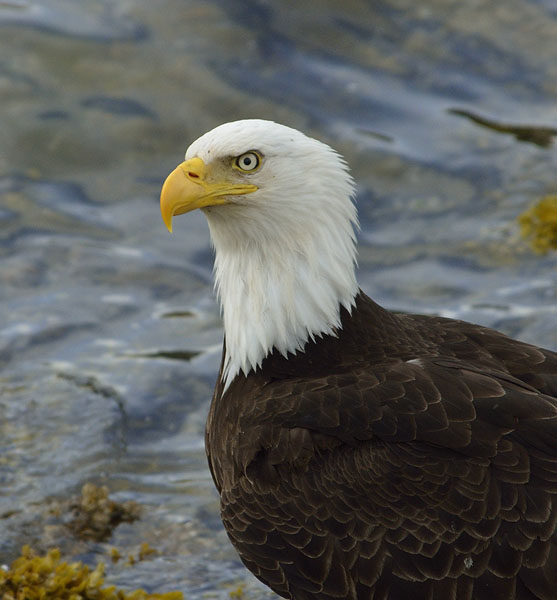 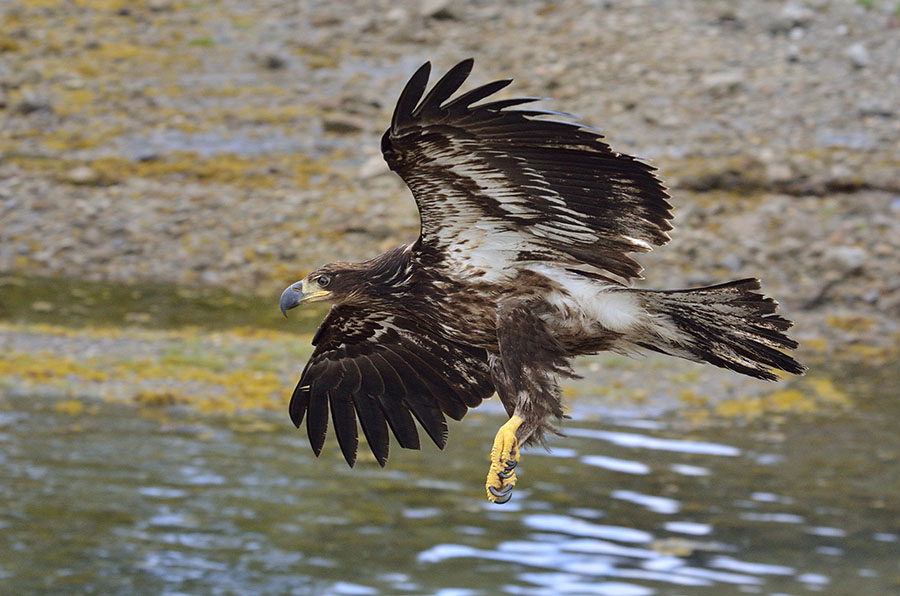 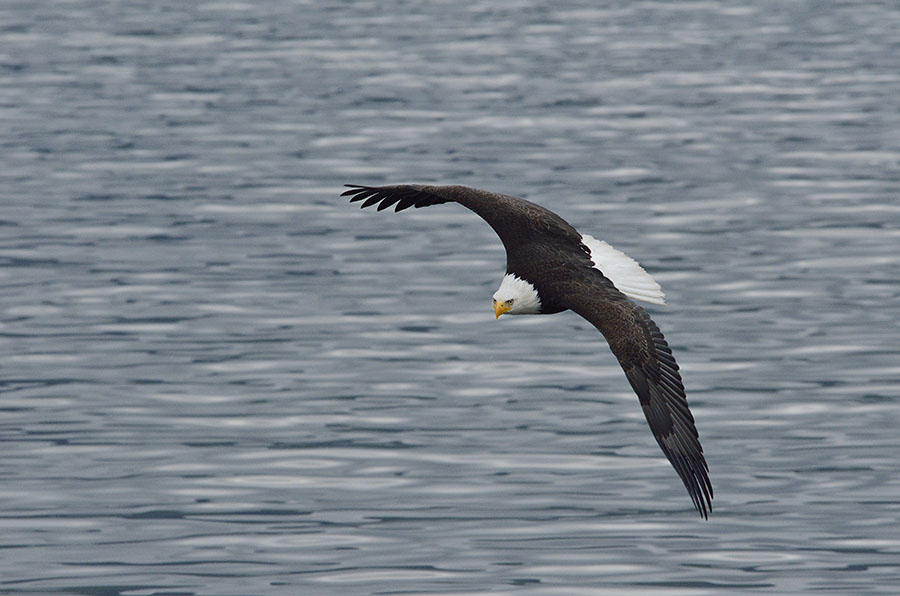 The ravens were not impressed. 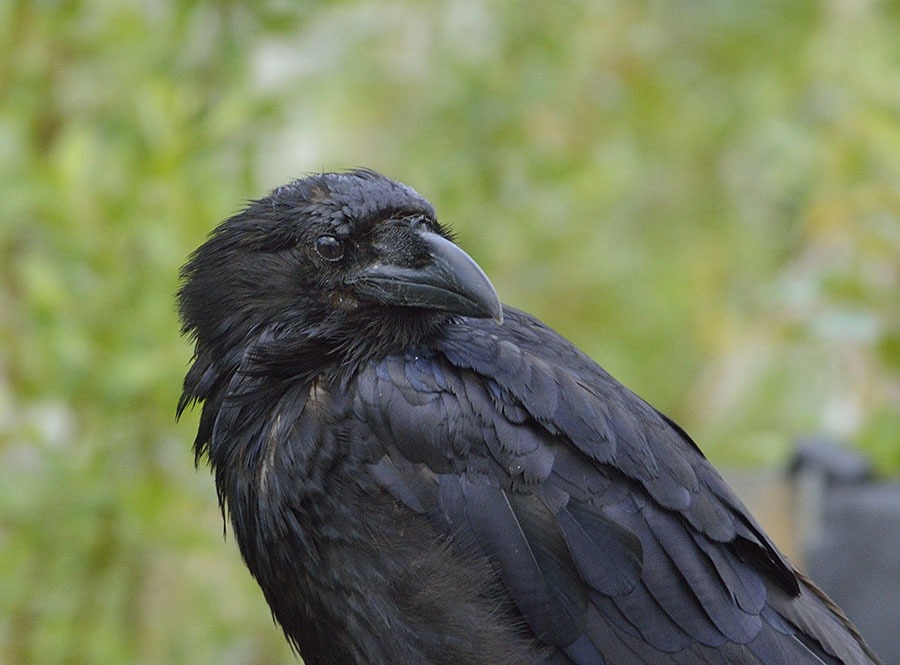 You just never know what you’ll find.  The secret is to get out there and look. 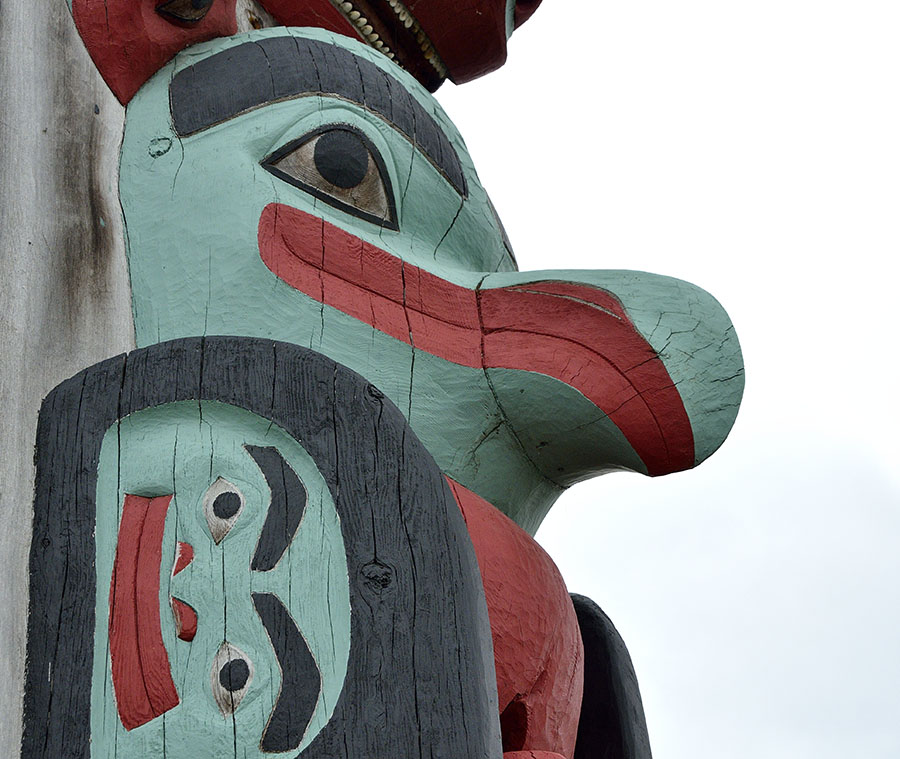 1 thought on “Wildlife Excitement in Hoonah”