We arrived in Churchill, Manitoba for a few days during the 6 week “season” when polar bears congregate on the shore of Hudson Bay waiting for the sea ice to form.  Polar bears are creatures of the sea ice – that’s where they find their primary food source (ring seals), and it’s where they are most comfortable – they’re designed to thrive in the extreme cold.

It’s interesting to note that Churchill, Manitoba is only 200 miles north of the same latitude as our home in Petersburg, Alaska.  The Japanese Current keeps our part of Alaska temperate, while the currents feeding Hudson Bay bring colder water and weather that will freeze salt water. 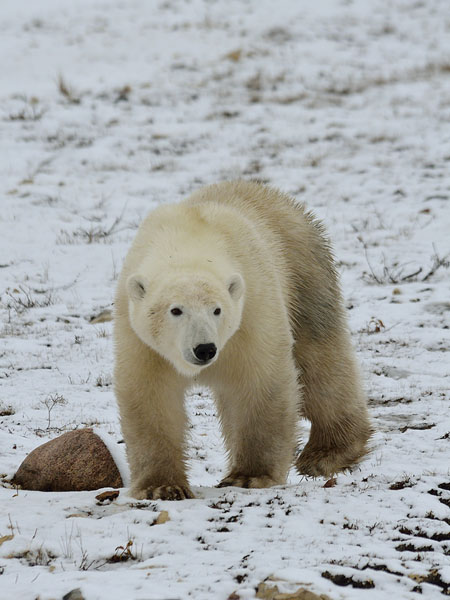 Did you know that a polar bear’s skin is actually black?  And their fur is clear, specially designed to help keep them warm in extremely cold temperatures.  The week we were in Churchill the temps were pretty warm – right around freezing, so the bears weren’t as active.  They don’t have good food sources on land so they haven’t eaten much all summer.  At this time of the year they’re hungry and thinner, and they need to conserve as much energy as possible. 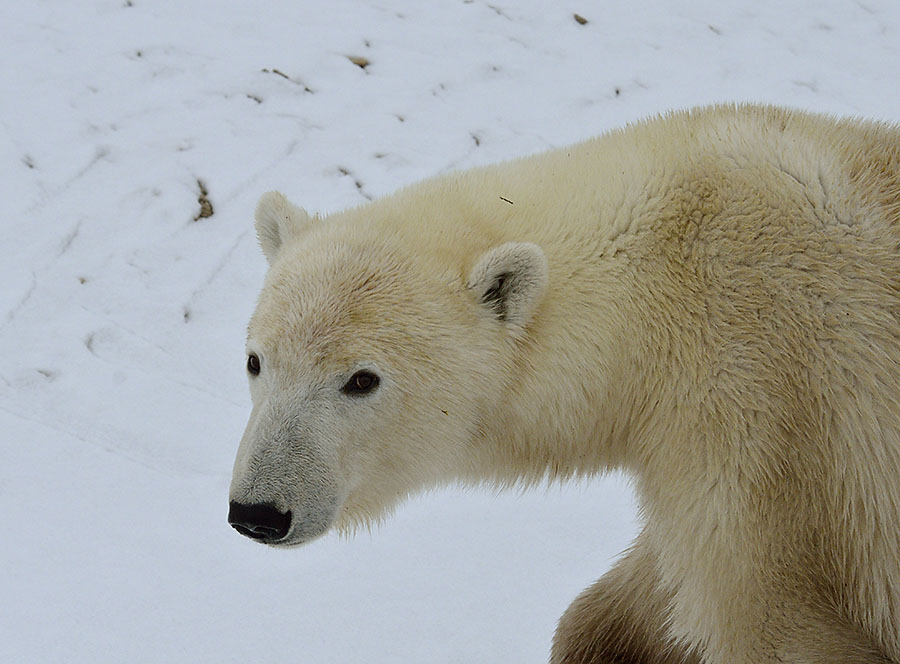 Polar bears are apex predators, and although humans aren’t their preferred food source, they absolutely will hunt and attack humans when they’re hungry.  Unlike black and brown bears, these white bears are not to be trifled with!  Bear spray would just make a polar bear think “ooooh – spicy food!” 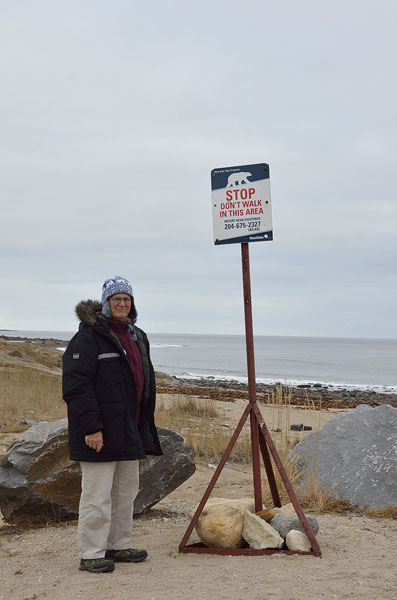 We were able to get so close to these predators by getting out on the tundra in polar rovers like these – with tires tall enough that a standing bear can’t reach the windows or the open viewing platform. 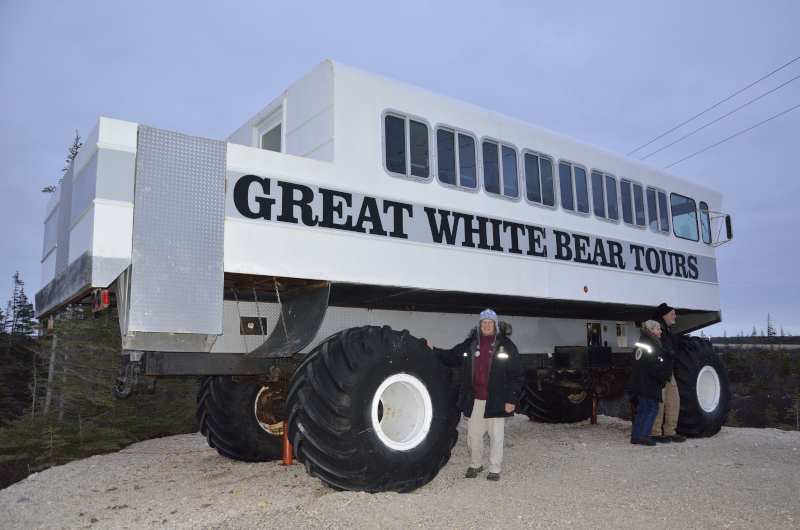 And to maximize our time on the tundra, we stayed in a tundra lodge – a small “train” that is parked out on the Hudson Bay shoreline in the midst of bear territory.  It had sleeping cars, a lounge, and a dining car, and no one sets foot on the ground.  There are steel mesh open platforms between each car, and occasionally a bear would hang out underneath.

The bears are curious about the rovers and the lodge probably because they see them as big cans of meat.  If they could get one open, they’d have a pretty good meal.

In addition to the bears, we spotted two snowy owls… 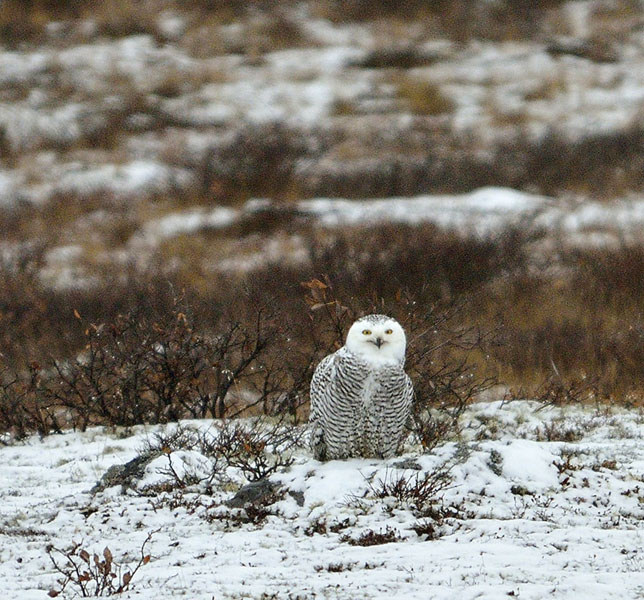 …arctic fox, a black morph of a red fox, snow buntings, and lots of ptarmigan. 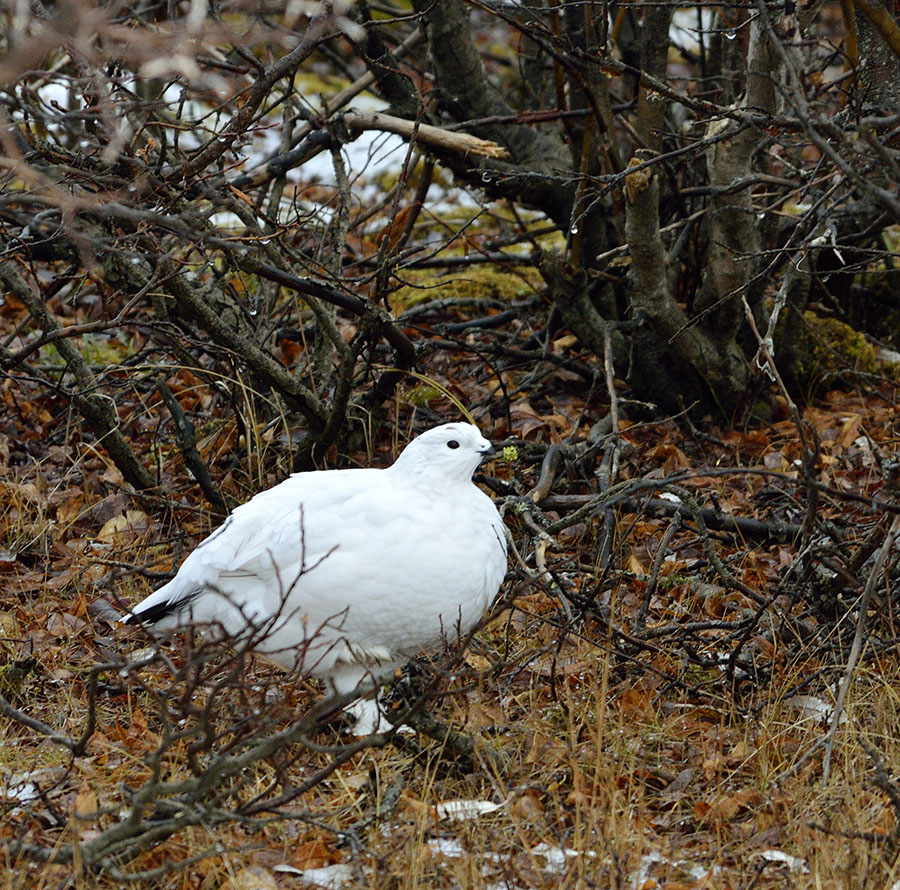 We saw some solitary bears, but my favorites were the mothers and cubs. 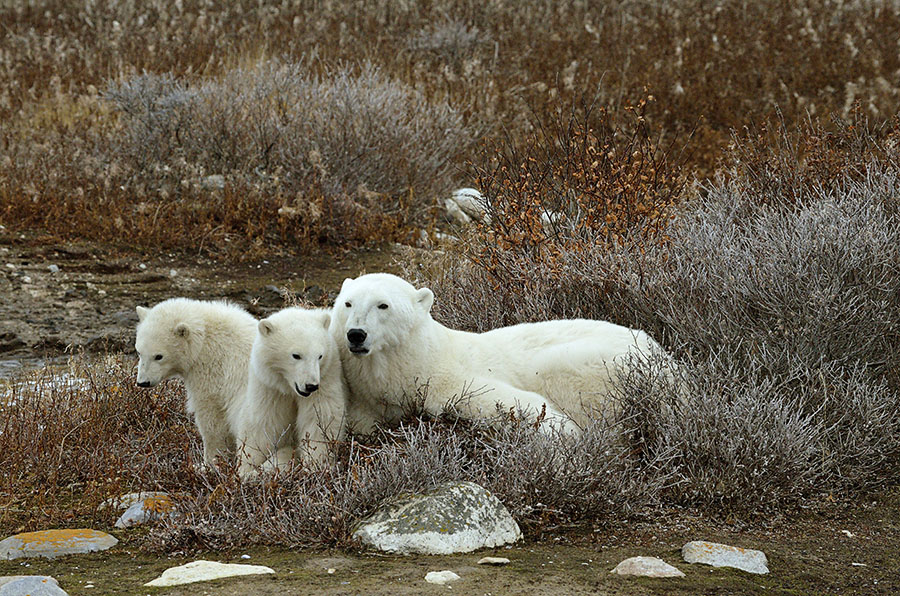 In one instance we spotted a mother with two cubs that ran from another mother and single cub, though we couldn’t see any overt signs of aggression between them. 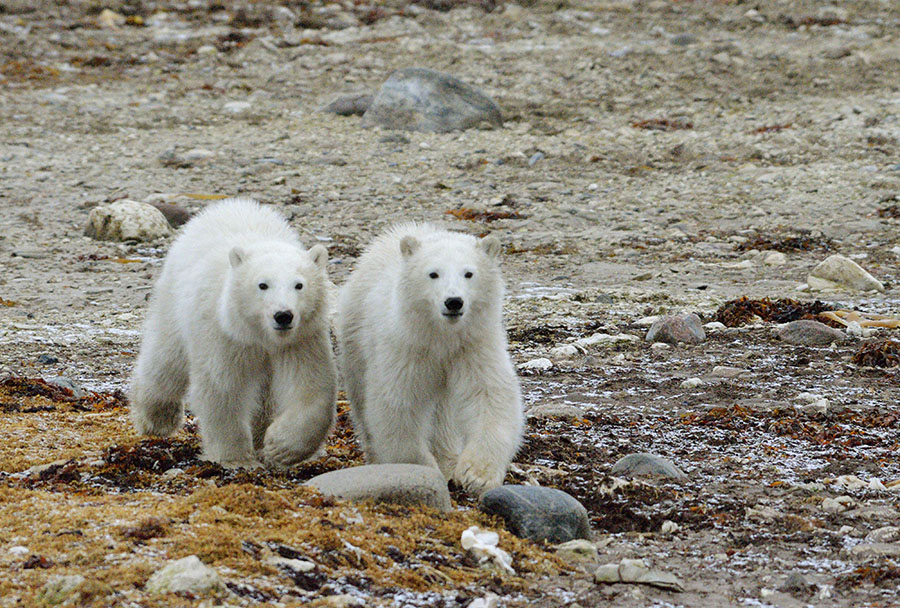 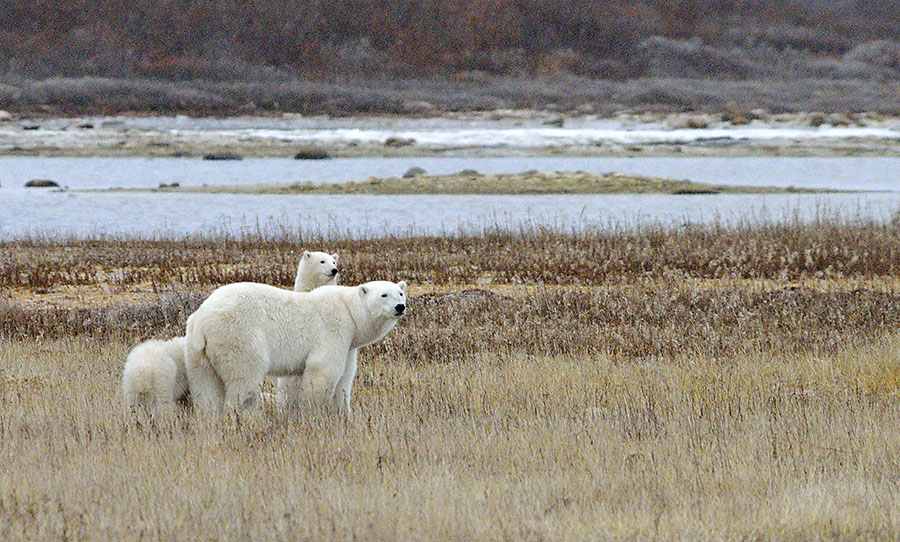 The little family that napped and snuggled together was my absolute favorite, and we were fortunate to watch them for a nice long time. 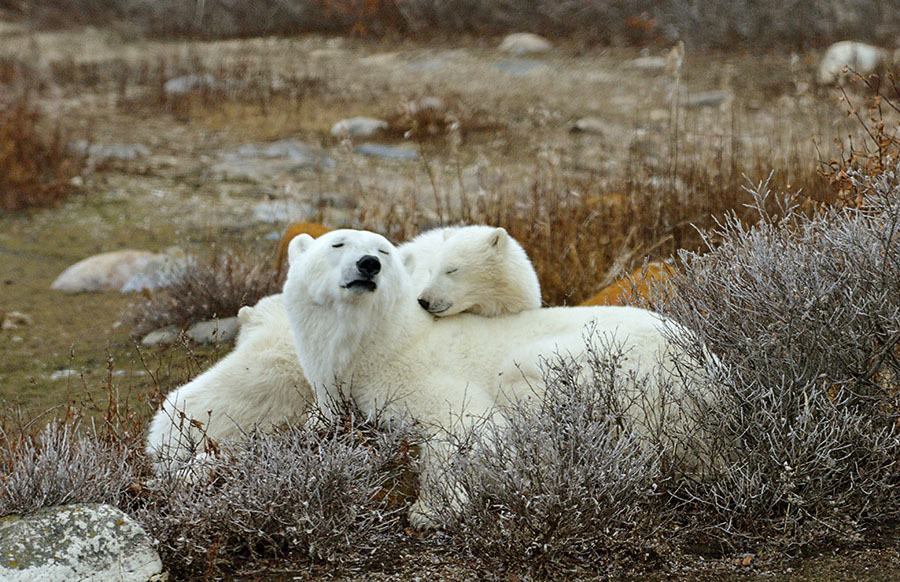 As a knitter traveling with friends to a chilly place, I had to make some appropriate hats to keep us warm while watching the bears, so I found a pattern for polar bear hats… 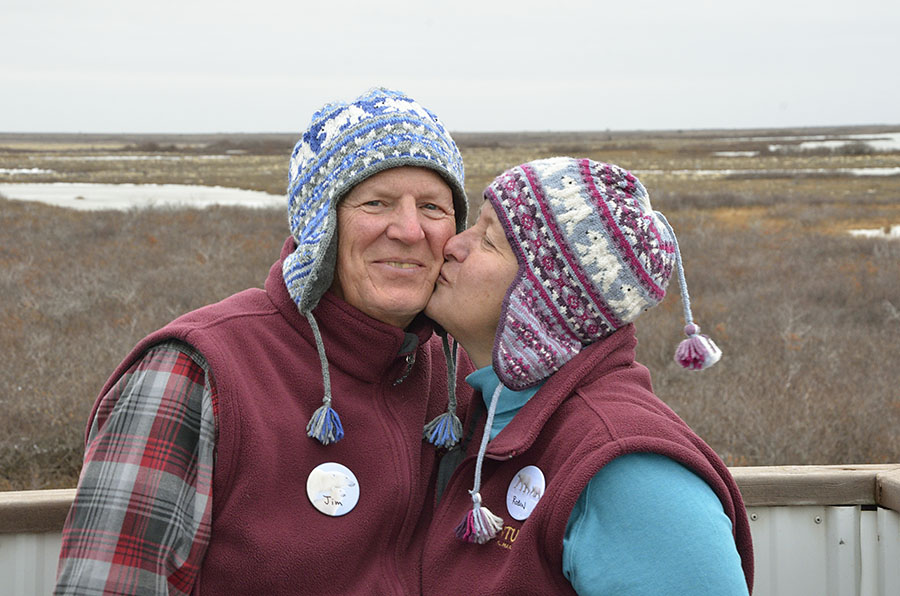 …and they worked pretty well.  Our adventure on the tundra was much too short, but we had a great time and we met a number of exceptionally nice people.

Living in Alaska makes us more aware of the impacts of climate change – coastal communities in our state that depend on sea ice formation to protect them from winter storms are now pounded by waves and residents will have to relocate.  Warmer temperatures are causing plants and animals to move farther north, competing with native species and dramatically changing the balance.  Arctic species are threatened more and more literally every day, and as a nation we must take a leadership role in addressing the man-made impacts.  We have a responsibility to protect our planet so our children and grandchildren can see polar bears and other arctic animals in their lifetimes.