Sounds like an odd combination of wildlife, eh?  Actually, the title refers to a wildlife sighting and the name of a little town.  Here’s a map of the area we’ve been exploring. 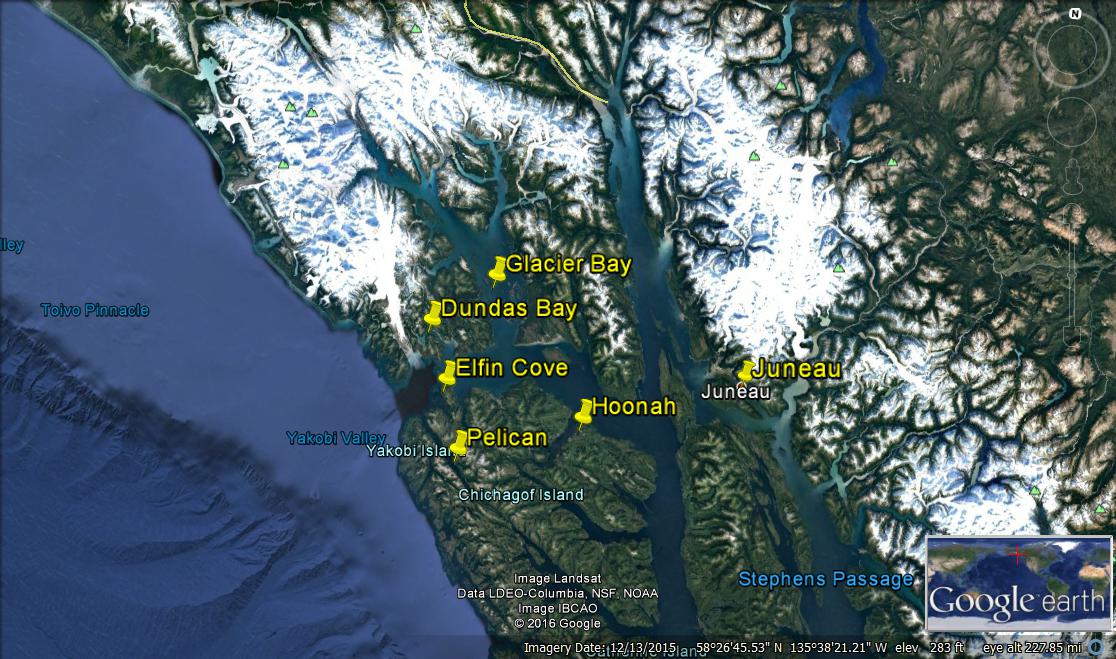 I included Hoonah and Juneau to help with some landmarks.  You can see Glacier Bay where we enjoyed venturing far up the western arm (almost to the top of the map) and then we headed out towards the ocean to explore some new places. 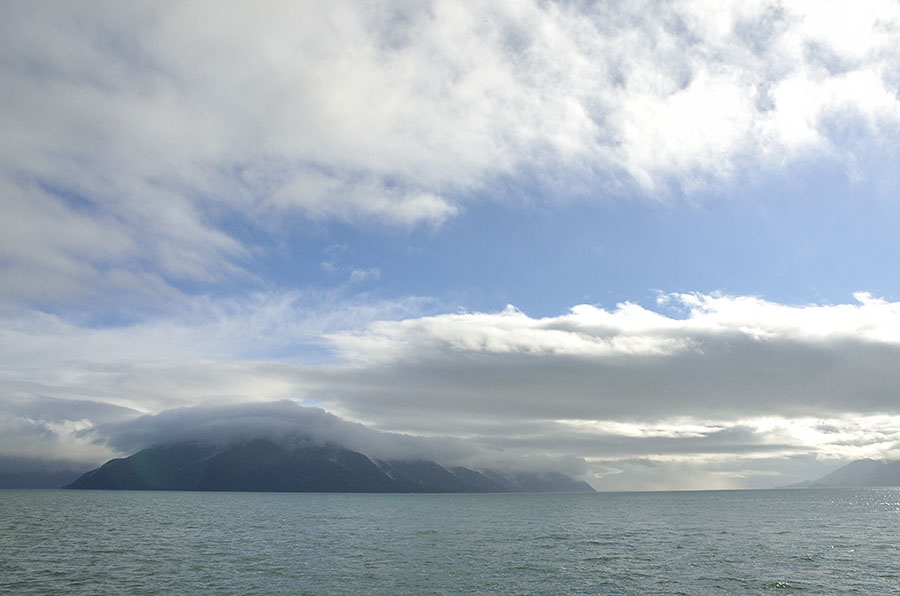 We’ve been wanting to go to Elfin Cove – a tiny boardwalk village tucked in a protected cove just off the ocean, but when we stuck our nose in there we found the dock jammed with fishing boats. 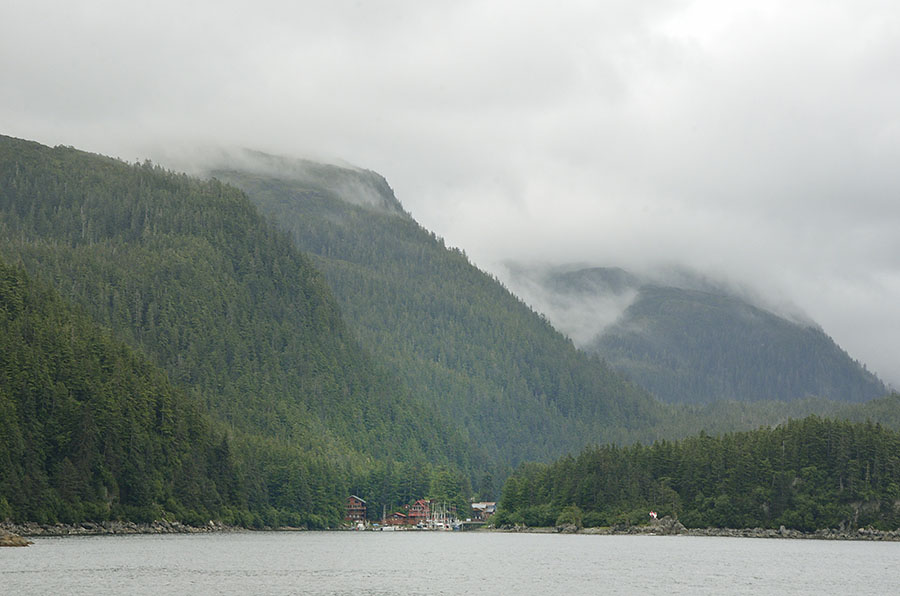 There’s no good spot to anchor there, so we had to retreat to an anchorage in the Inian Islands where we were pummeled with two days of rain.  We were hoping to get a break in the weather so we could take a long dinghy ride to Elfin Cove and the Hobbit Hole, but there was no way – I couldn’t even kayak.  We got tired of the foggy view so we jumped across North Inian Pass into Dundas Bay (on the map above) – part of Glacier Bay National Park that’s remote and doesn’t require a permit to enter.  We had a brief respite from the rain cruising into Dundas, but by the time the anchor was set the drenching downpours started up for another two days.  The weather broke and we were ready to get moving again, though we got a few treats first.  The best surprise was an early morning sighting of a wolf. 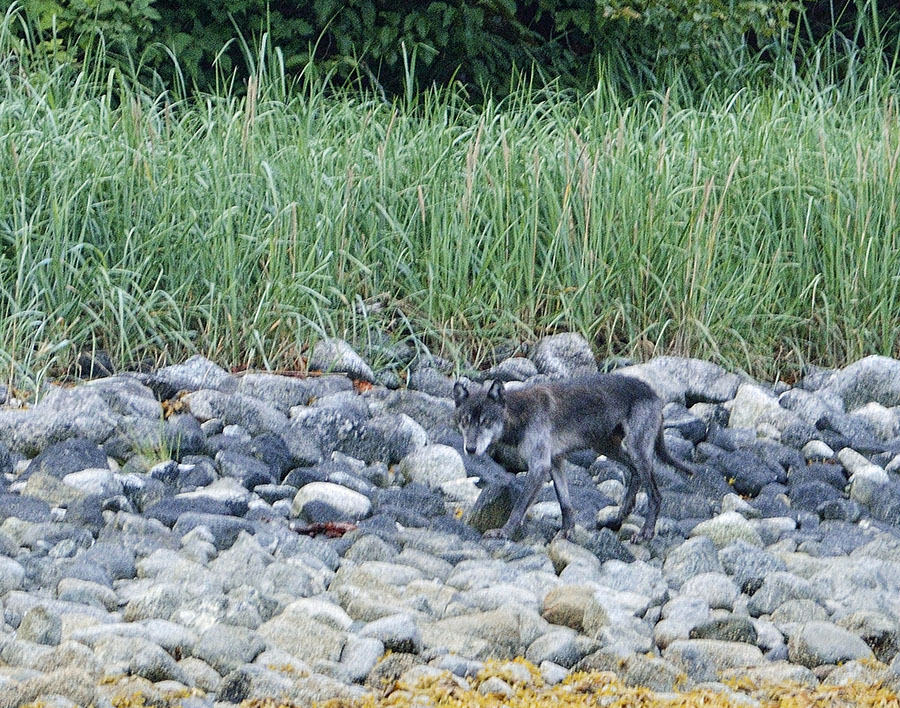 I saw motion out of the corner of my eye as I was scanning the shoreline for wildlife, and he was so camouflaged that I almost didn’t see him.  He stayed in that band of gray rocks, blending in perfectly, and he just glanced in my direction once as he trotted along.  Yowza!  I’ve been wanting to see a wolf ever since we moved up here.

As the sun finally made an appearance, we could see the island near our anchorage more clearly.

Notice anything odd?  …such as the swath of trees that are knocked down?  That’s known as a blow-down, and it’s caused by a blast of strong wind.  There were a few other blow-downs in the bay, and it helps us imagine the fierce power of the fall and winter storms coming off the Gulf of Alaska.  It’s a beautiful bay, worthy of more exploration. 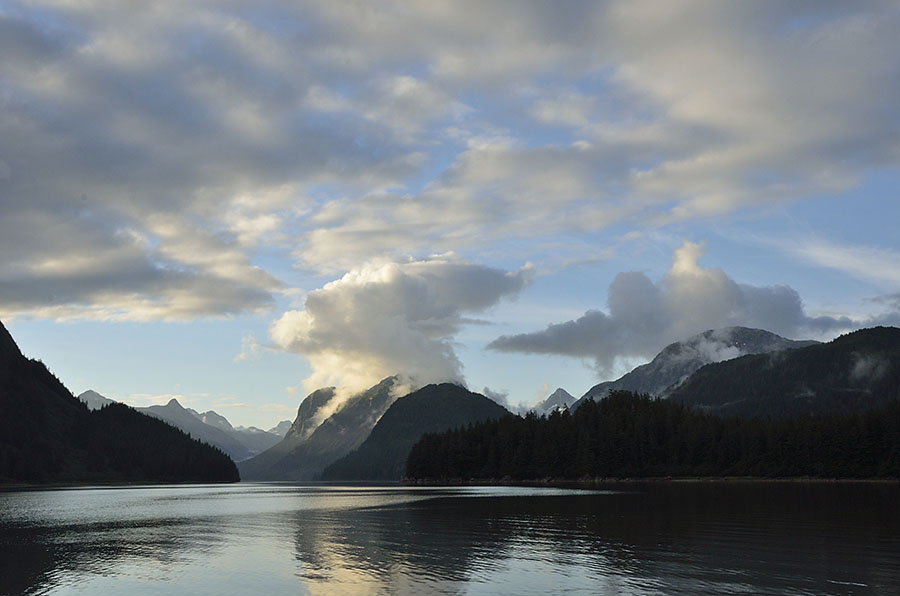 We headed back out towards the ocean to make another attempt to visit Elfin Cove, taking a rocky passage just inside the islands to shield us from most of the open ocean, choked with sea lions hunting when the water was turbulent at maximum tidal flow, but nice and calm when we transited near slack water.

Once again, Elfin Cove’s dock was jammed with boats so we decided to run down the coast of Chichagof Island to Lisianski Inlet to check out the tiny town of Pelican.  Along the way we saw lots of fishing boats, and we spotted one of the big 80-100′ tenders that buy fish from the trollers, re-supplying them with ice, fuel and supplies. 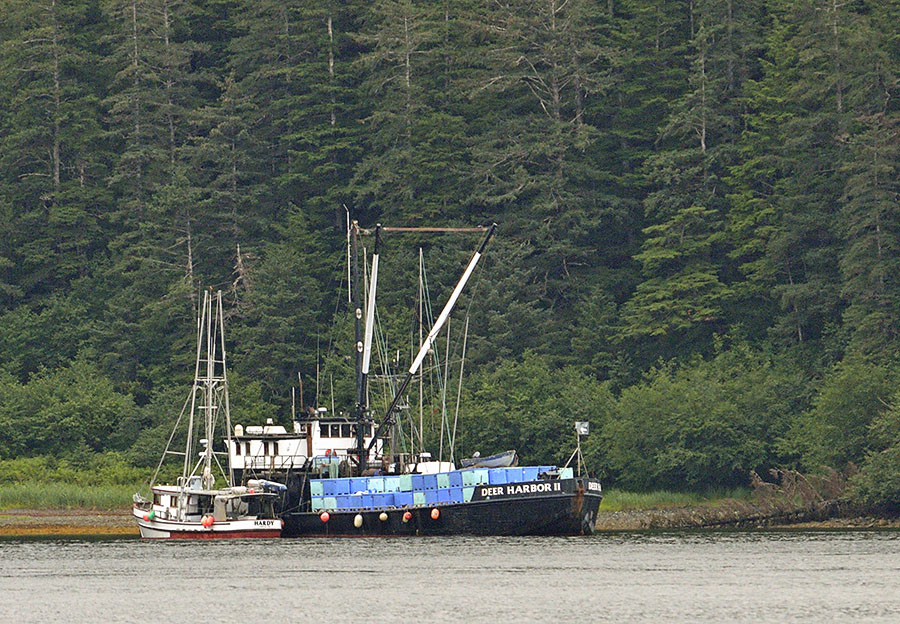 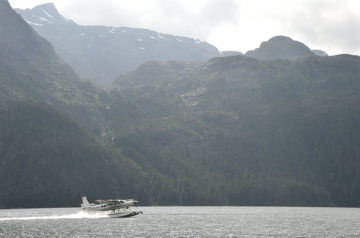 The Alexander Archipelago is the name of the collection of islands and channels that make up the panhandle of Alaska – commonly referred to as southeast Alaska, or just “southeast”.  If you look at a bigger map of southeast, you’ll notice that it resembles a shattered windshield – so even the area around the open ocean has many channels that offer some protection.  But these channels are deep – 500-1000′ and sometimes deeper, surrounded by tall mountains.  There are no roads to connect the settlements, accessible only by water or by air.

Pelican used to be a more vibrant community of about 200 people until its cold storage plant closed eight years ago.  Now 40 people are full-time residents, and there were just 9 students in the school last year.  The summer population swells a bit, with staff and visitors to a few fishing lodges – the major economic driver for the town. 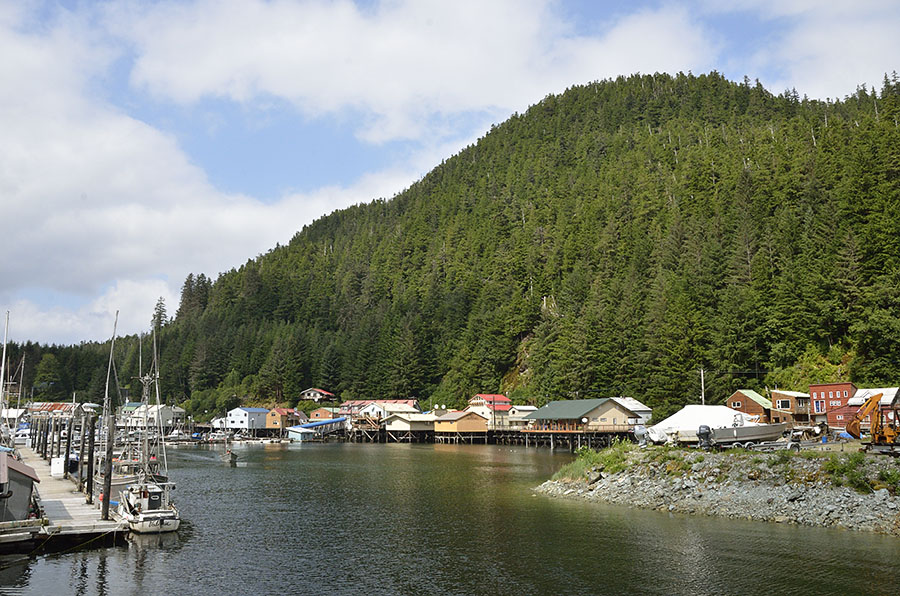 Perched against a mountain, most of the town is built on the edge of the land or over the water, and the main street is a boardwalk.  People run around on ATVs and heavy duty golf carts. 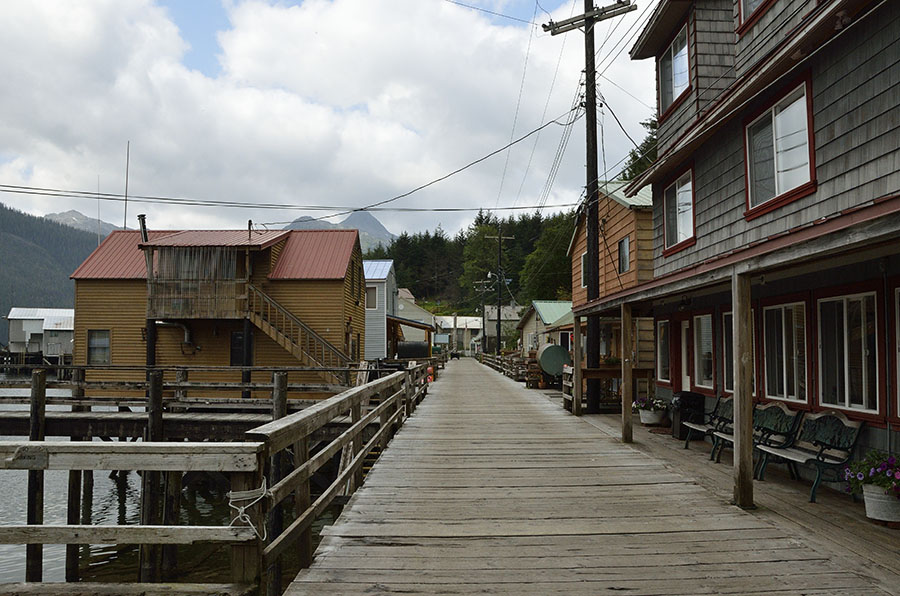 The big General Store closed when the cold storage was shut down, though some dry goods are available at the Inn where you can also get a mediocre pizza, or you can go next door to the famous Rose’s for a slightly more varied menu in a scruffy, smokey setting.  It doesn’t sound like a great place, but the locals are very friendly, and it’s a beautiful spot.  The people who live here don’t have it easy.  Cuts to the State Ferry service mean that the summer ferry stops once every 5 weeks (less often in the winter), and the costs to ship things in by barge (like groceries) is about $1/lb. 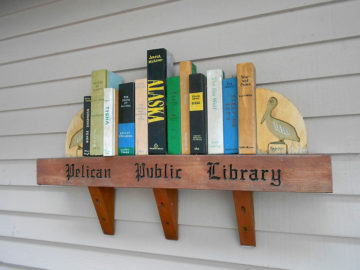 The Library was small but quite good, and I got to meet some of the local ladies at the weekly Sunday afternoon crafting session there.  The town has a small medical clinic, but it was closed with a sign saying that the Physician’s Assistant from Sitka would be there for a day in later August.  If you have an emergency or medical problem, you have to rely on volunteers and/or you take a float plane to Juneau (weather permitting).  And for you fans of the radio show “Car Talk”, we found out where their lawyer’s headquarters are located – it’s here in Pelican! 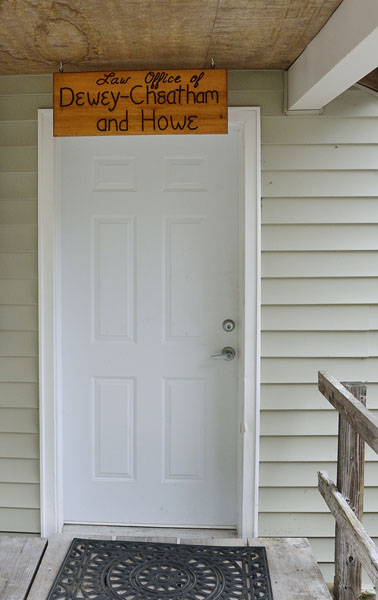 There’s no cell service in town, but you can hike up the mountain to the town dump if you want to make a call – except on Mondays, which are trash days.  Trash is burned, and they burn it as soon as it’s collected to keep the bears from hanging around.  Since the salmon were running the town was having some problems with bears on the boardwalk.

We had to make a couple of calls, and we were having trouble with keeping a good signal on the satellite phone with all the tall mountains around, so we hiked up… carrying bear spray and calling out “Hey Bear!” frequently.  You can’t make this stuff up.

We made some new friends in Pelican – custom boat builders from Port Townsend, WA visiting in their gorgeous tug boat, and a couple who live in Pelican who used to own a wood DeFever like ours.  Our new Pelican friends know Petersburg friends (it’s a big place, but a small world), and they invited us up to their lovely home up on the mountainside overlooking the inlet.  We learned a lot more about living in a tiny community from them, as well as living in an area with more numerous and problematic bears.  They’re buying a new boat and we can’t wait to host them in Petersburg when they bring her north in the spring.

We capped off our visit with lunch at the little cafe, a long walk and a shared ice cream.  It’s an odd little place, but we liked Pelican and will definitely be back next season.  Oh, and why is the town named Pelican when there aren’t any of those birds in Alaska?  It was named after the boat of the town’s founder in 1938. 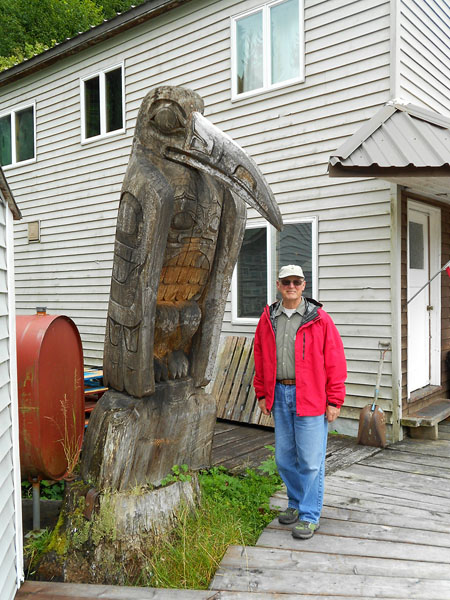