The antidote to the hectic pace of festivals and town is to get back out on the water and seek quiet places. 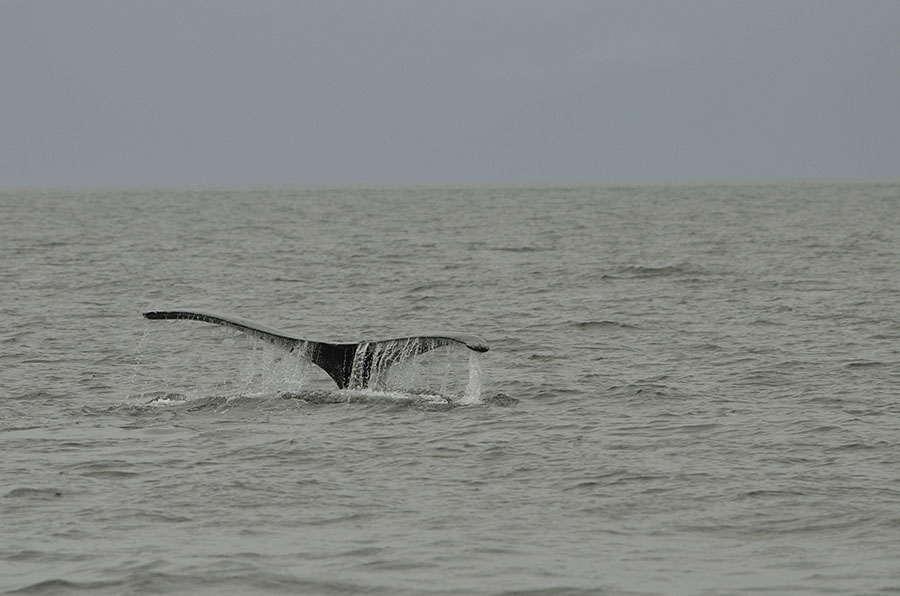 We had plenty of whales to keep us company on the way to Cannery Cove at the bottom of Admiralty Island.  The weather wasn’t the nicest – it was the typical overcast with some occasional rain, but that didn’t dampen the beauty of the huge rock bowl and the numerous silvery strands of waterfalls. 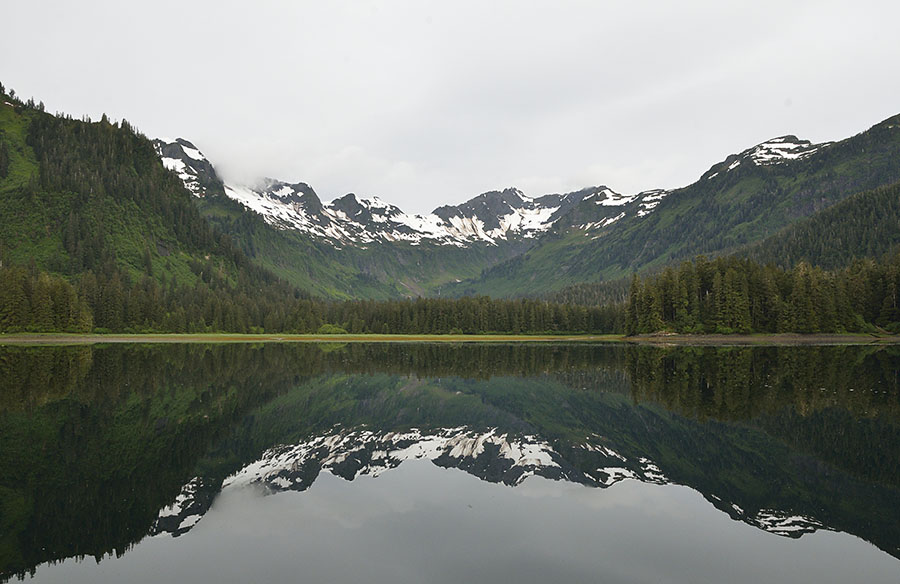 The weather wasn’t very good for kayaking or dinghy exploring, but it was just good to e-x-h-a-l-e.

We headed across Stevens Passage to a investigate a new spot – Sanborn Canal. 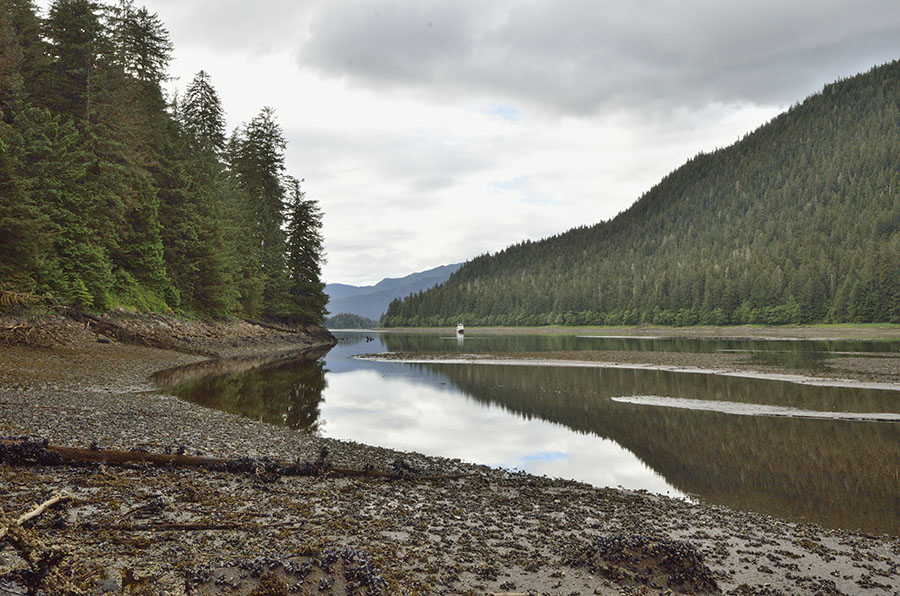 It’s a small inlet off to the side of a much larger glacier carved inlet, with a big meadow at the head, bisected by a creek.  It should have been a great place to see bears, but we never saw a single 4-legged mammal in the several days we spent there.  The bird life was good though, with all three types of loons, mergansers, eagles, and northern shoveler ducks (a first for me). 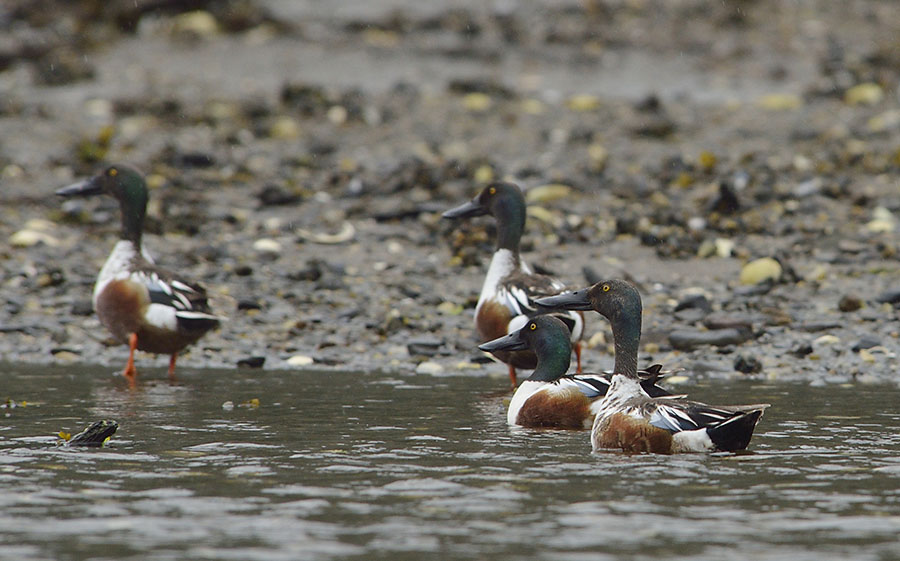 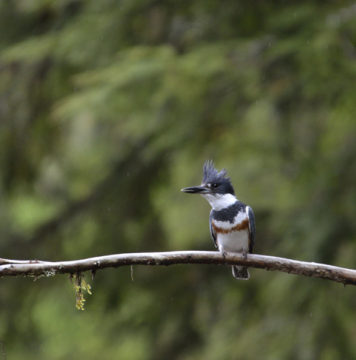 The head of the inlet shoaled to dry land at low tide, so I waited until the last hours of the rising tide to kayak up the creek, armed with bear spray and plenty of camera gear in dry bags.  The creek meandered through the meadow, and as it turned I could see bigger mountains and a huge cascade in the distance.  Some kingfishers were chittering and dashing around, and I was lucky enough to get close enough while they sat still a few times.

Besides the grand view, the upper meadow was awash in colorful wildflowers… so pretty. 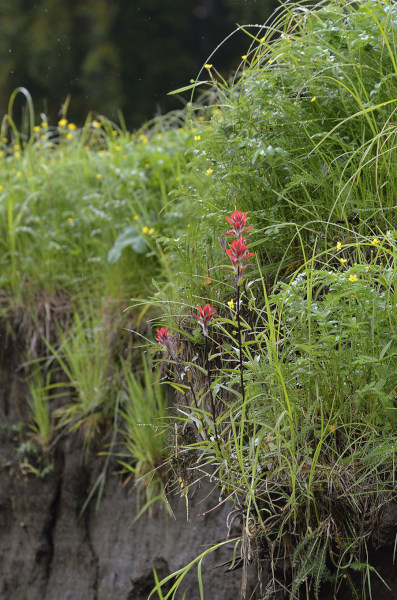 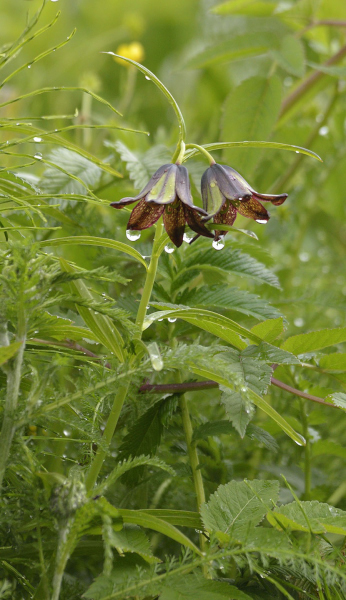 There was plenty of water up the creek, but I was worried about the falling tide leaving me stuck behind the dry bars at the saltwater end, so I stopped my exploration with more creek left to investigate another time.  On the way out I had a few little spies keeping an eye on me – young harbor seals. 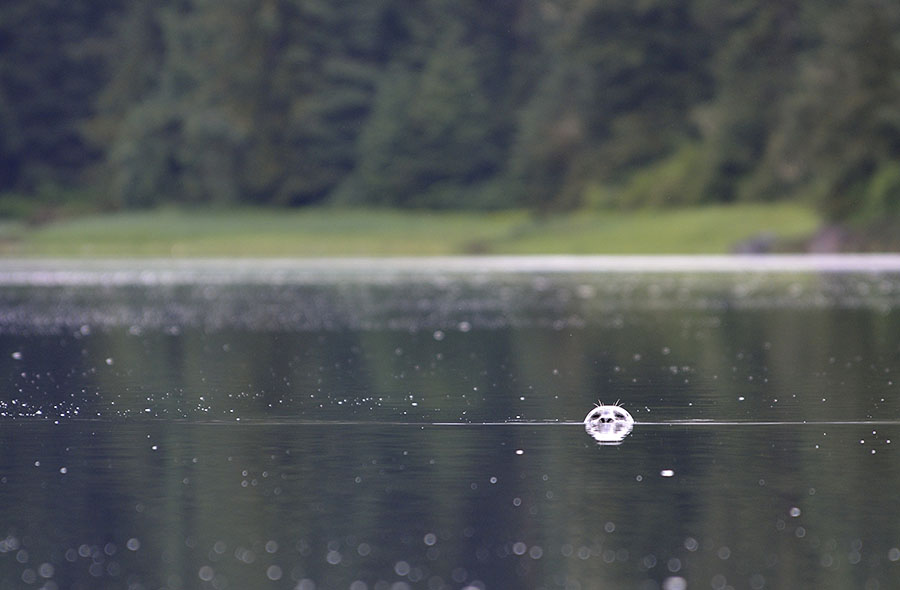 By now you may be asking, “where’s the ‘Icy Excitement’ you promised?”  Up until now we were enjoying peaceful and relaxing days.  Our next destination was Holkham Bay where two long glacier-cut arms branch out in opposite directions, each with glaciers at their heads.  We heard reports that Tracy Arm was completely blocked by large icebergs, but that Endicott Arm was open all the way to the Dawes Glacier.  We headed to the best of the very very few anchorage options in the area to stage up for the next day’s trip up to the Dawes and back. 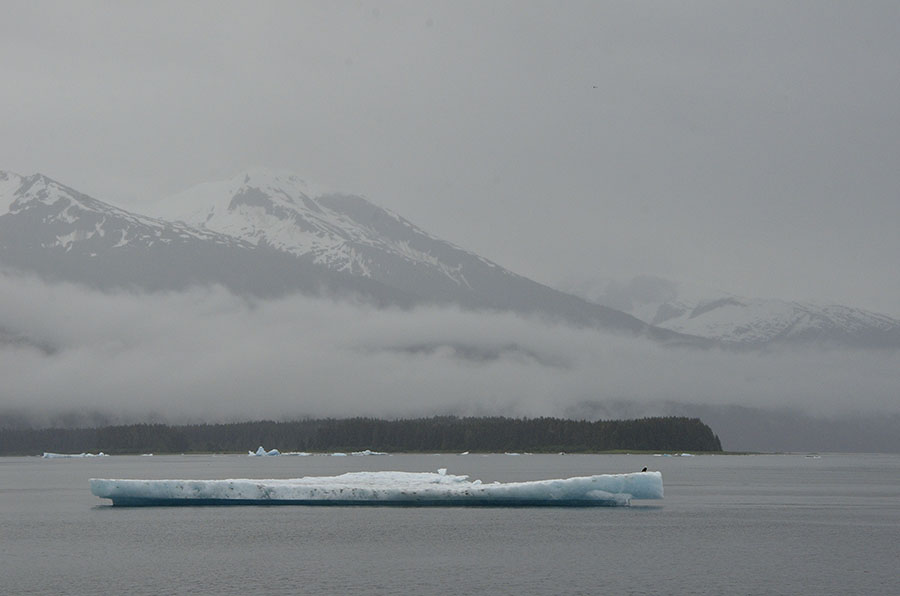 This berg was near the entrance to the Bay, and to give you an idea of its size note the little black speck on the far right end – that’s a bald eagle.  The reports were quite true – there were a lot of big icebergs choking all of Tracy Arm, though the eagles seemed happy about it since we saw a number of them perched atop the bigger ones. 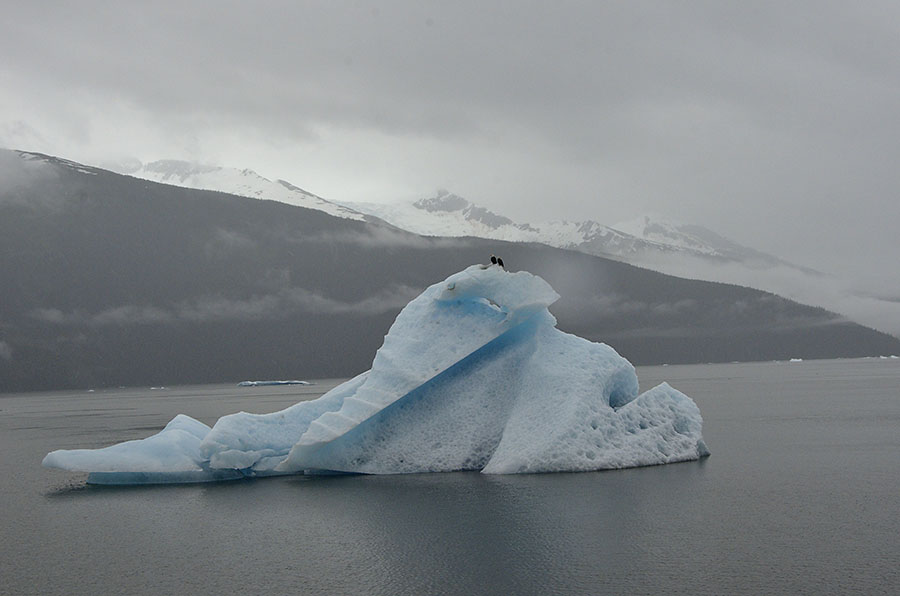 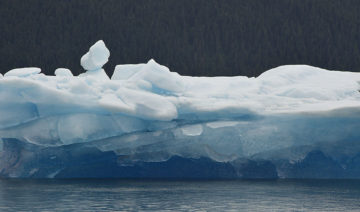 The most protected anchorage gets fairly shallow – to about 50′ so that helps to keep the big bergs out – they will run aground before they can get into the cove.  Unfortunately we were experiencing extra large tides because of the full moon, and that combined with strong winds from the south made things a bit more interesting.

We were anchored with a few other boats, and we kept an eye on a few big bergs that were trying to get into the anchorage. High tide was at midnight, so if the bergs stayed away until then we could rest easy.  As the water rose and the wind-blown waves got bigger, some of the bergs occasionally skipped along the bottom… sneaking up on us.  The sailboat next to us decided to pick up their anchor and move – which was good since a big berg broke free and slowly drifted right over their old position.  We were watching a bigger berg that was in front of us, and we finally decided to fire up the engines and stand ready in case we needed to move around 11pm.  It was blowing 25 knots or better and raining – but that’s typical for Interesting Boating Events – icebergs never chase you on nice days.

“Our” berg finally started moving more deliberately, and we swung the boat off to the side to avoid it as it slowly drifted by.  We stood by until the tide started to fall and the berg was safely grounded on shore behind us. 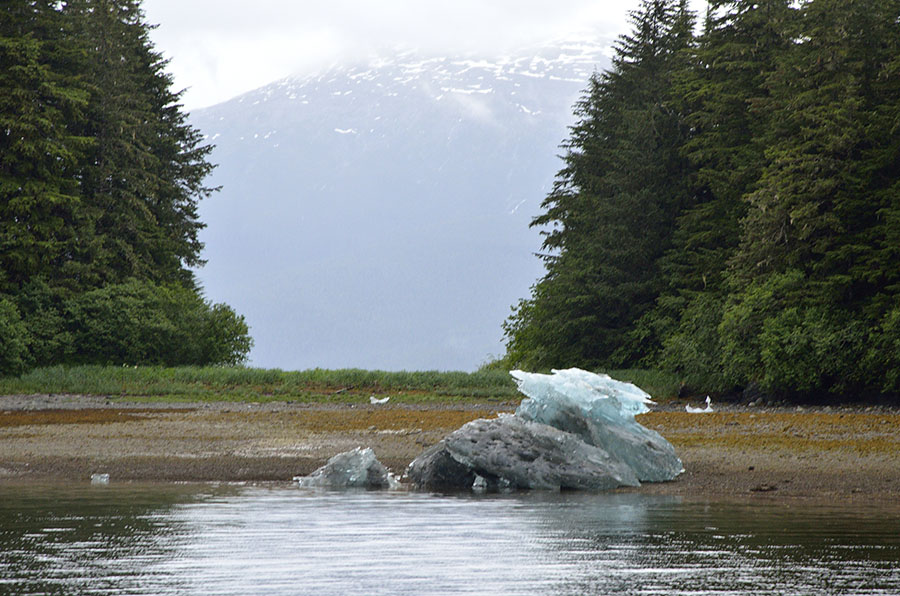 It’s hard to tell how big this beastie is from the photo, but it was about the size of ADVENTURES when it drifted by.

Some people from one of the other boats kayaked to shore the next morning to check out the grounded ice, and they stood near the smaller berg that chased the first boat away. 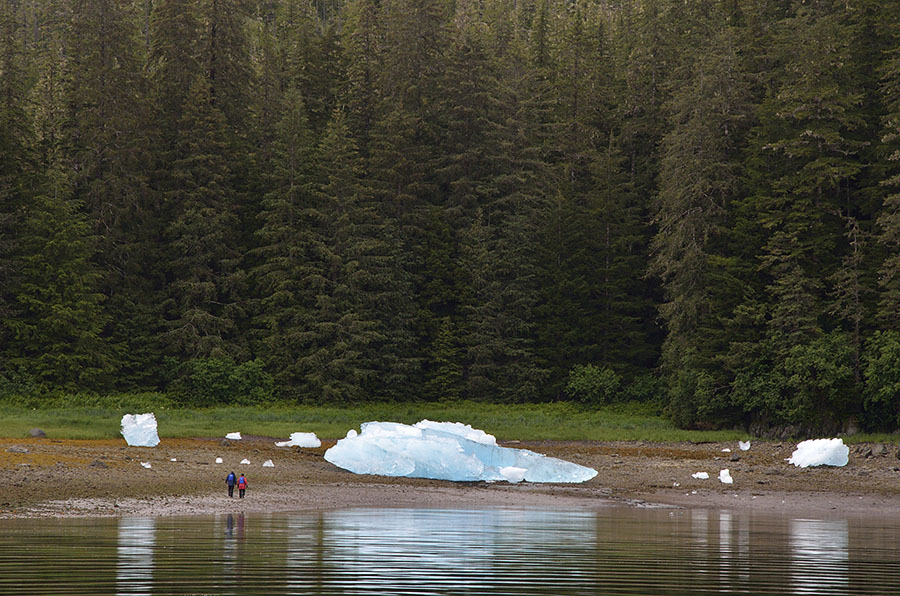 The only way for us to visit the Dawes Glacier was to spend a long day cruising up to it, and then returning to this same anchorage for another night.  Given that the extra high tide would occur around 1am and the strong wind was predicted to continue, we abandoned our glacier visit plans for another time.  Instead we left early to catch the morning calm and the tide, and tuck into a more restful anchorage farther north.