I’ve been hearing about El Capitan Passage from various friends in town so I bugged Jim to include it in our plans.  Located on the northwest side of Prince of Wales Island, this passage is a protected short cut for fishing boats and other commercial traffic, ending up in Sea Otter Sound at the southern end.  Near the northern entrance is a large marble mine, still active. 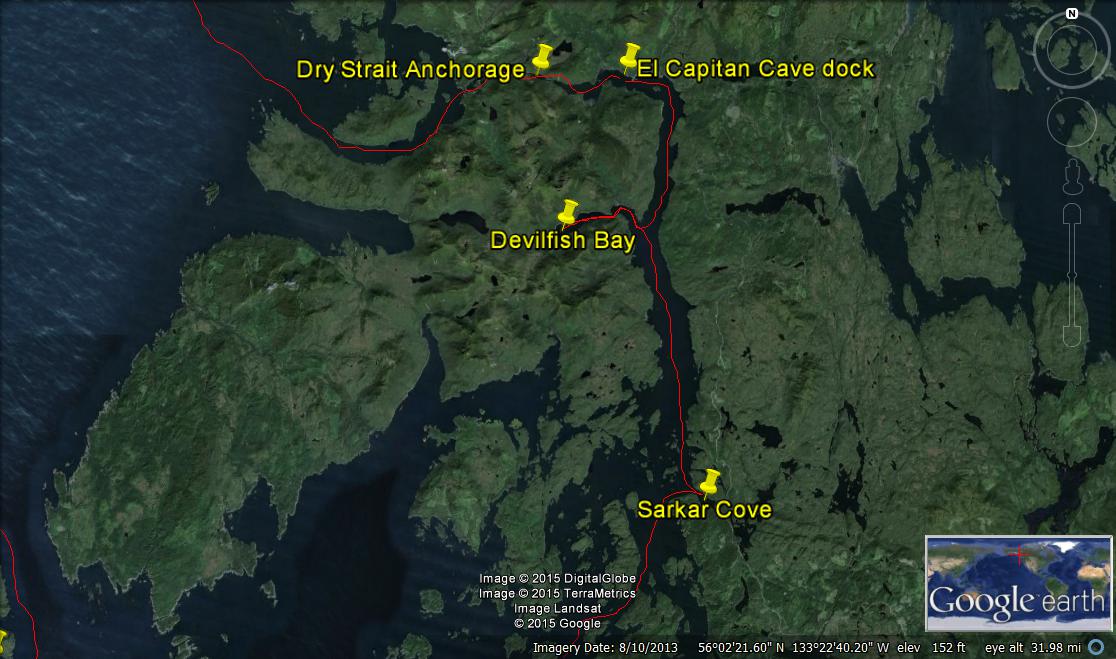 A segment of the passage at the north end was dredged through rock, well-marked with navigational aids, but narrow and just a little bit exciting to navigate through, particularly at dead low tide.  Why is it that we always seem to be in “interesting” rocky passages at low tide? 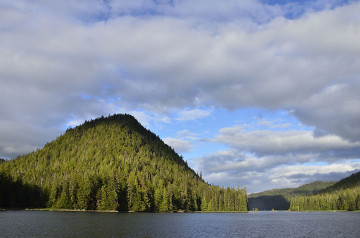 We anchored in one of the little bay-lets between dredged sections called Dry Strait anchorage, and the view was very interesting – there were a lot of granite domes like this one – rather different terrain than on some of the other islands in the Alexander Archipelago that make up Southeast Alaska.

We didn’t realize that there are a lot of karst formations – limestone caves in the area, and that the Forest Service offers tours of the largest one, El Capitan Cave in the summer months.  We called the Forest Service on the sat phone and made arrangements for a tour – what an unexpected bonus!

We launched the dinghy and traveled about 2 miles to the Forest Service dinghy dock where we met up with our excellent guides – a pair of geology undergraduate students.  Everyone was given a helmet and headlamp, and Matt and Anna gave a running narration about the forest and area as we trudged up the 370 steps, climbing 1100 feet in elevation to the entrance to the cave.  The steps themselves were interesting: built from yellow cedar 20 years ago, they have survived extremely well in the thick rainforest with virtually no rot. 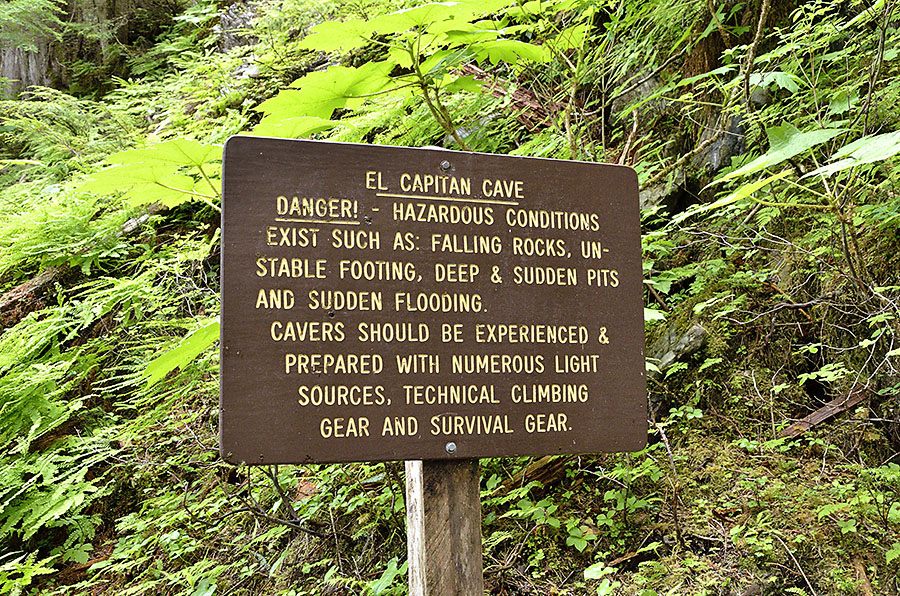 Discovered in the 1980s, the El Capitan Cave is the largest (so far) cave in Alaska, with over 2 miles of passages that have been mapped.  Animal remains, including black and brown bears have been found in the cave, some dating back to over 11,000 years ago.  I thought it was interesting when one of the geologists pointed out that this cave is karst – limestone dissolved by water; limestone is calcium carbonate.  Marble is quarried nearby and it’s also calcium carbonate, but formed under different temperature and pressure than limestone.  The north end of Prince of Wales Island is dotted with karst formations. 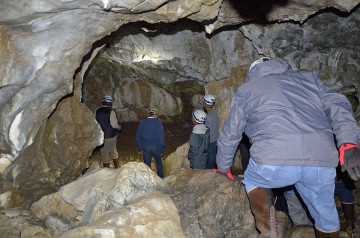 The helmets turned out to be a necessity, as I whacked my head on the ceiling not far into the cave’s entrance.  (I whacked my head in the exact same spot on the way out.)  This is a “wild” cave, in its natural state and not “enhanced” by paved walkways or hand railings.  Part of the main passage was clearly a streambed, but the walls had all manner of flowstone formations, dragon scales, nodules, crystallized seams, and water droplets that seeped down from the muskeg over a long period of time. 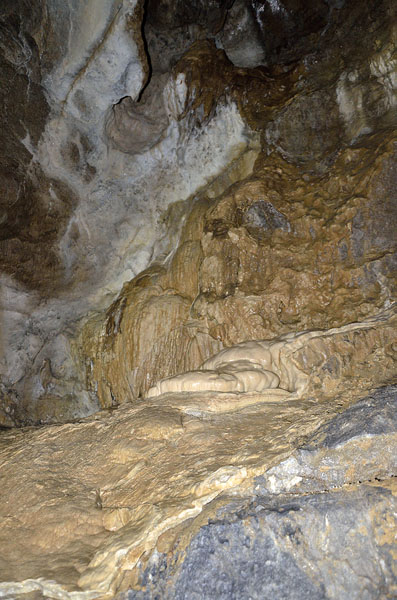 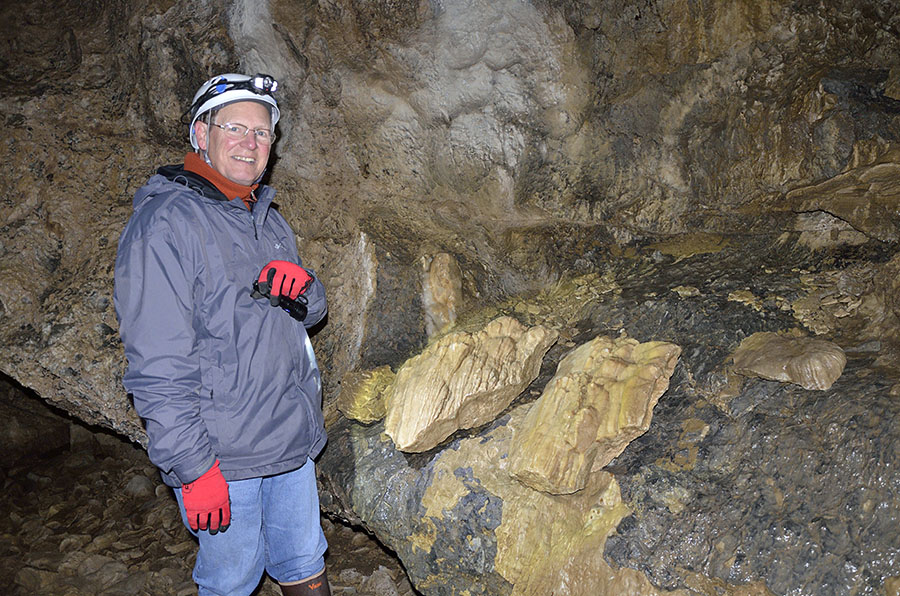 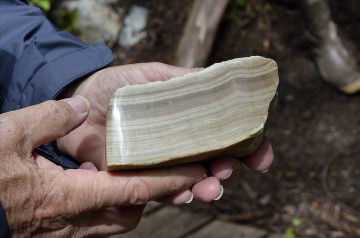 This is a cross-section of some flowstone from the cave that was cut and polished to show what it looks like inside.

What’s fascinating about this cave and the numerous others in the area are that they were only just discovered in the last 30 years or less, yet so many of them contain animal bones that are 8,000-12,000 years old, and in some cases the bones are from animals that are no longer found on Prince of Wales Island.

We were expecting rocks, mountains and sea otters, but not caves and paleontology – what a great surprise! 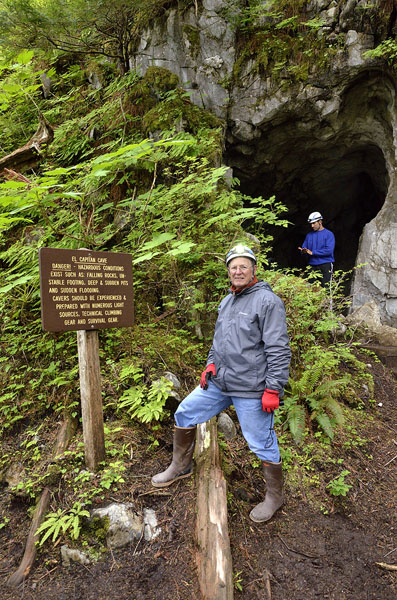