It’s hard to imagine so much Norwegian-ness packed into one weekend, but this town is really up to the task.  Petersburg’s Norwegian exchange student and her family keep saying how much more Norwegian we are here compared to Norway.  Our town is steeped in traditions while Norway has become more westernized, and the Norwegians enjoy seeing their culture and customs celebrated so much here.

Last Saturday started with the Lil’ Fisk Derby for young anglers, and our dock was crowded with short people in life jackets hoping to win a prize despite the handicap of short attention spans.  They were adorable. 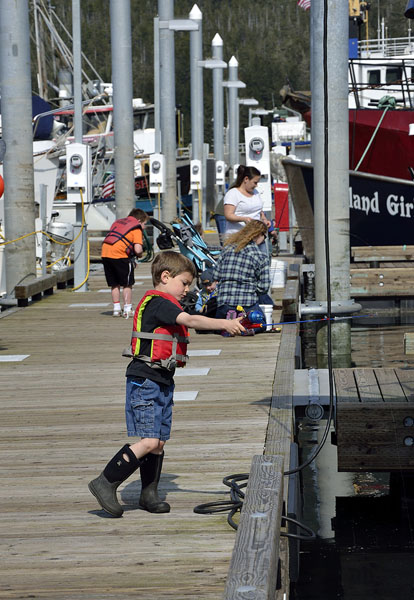 Herring and smelt were caught with bare hooks, and this fellow caught a nice little Dolly Varden trout. 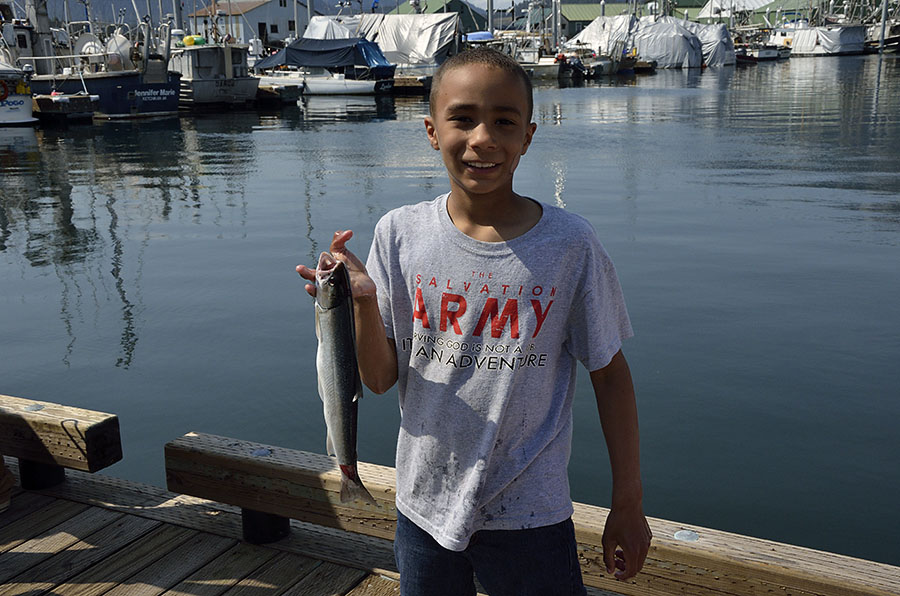 Meanwhile people were lining up to get into the Kaffe Hus at the Sons of Norway hall, where we could sample all kinds of open faced sandwiches, cookies, pastries, and cakes.  The line was quite long, but we had some nice musical entertainment to distract us.  I was admiring the Norwegian sweater worn by the gal in front of us in line, and I found out that it was made by her mother – who was busy playing the accordion for us. 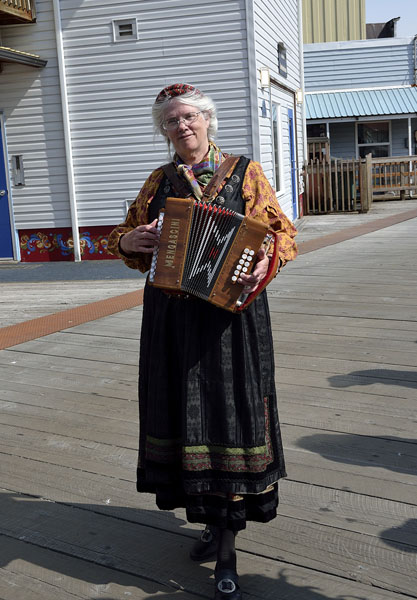 It was hard to choose among the treats, all hand-made.  Butter features prominently in Norwegian cooking, as well as the spice cardamom.  Everything was as beautiful as it was delicious! 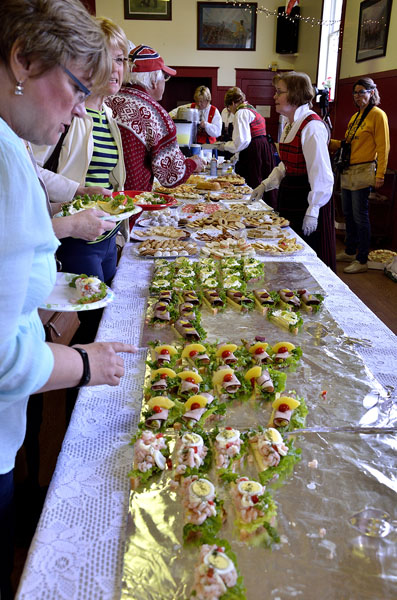 We headed back to the boat to recover for a while, then headed to the next event – the Pageant.  We had VIP guests in attendance – Alaska’s Governor and Lt. Governor and their spouses were in town to dedicate the new drive-down dock in the harbor.  The Governor was embarrassed to admit that it was his first time in Petersburg.  When he mentioned that he will be hosting the King of Norway next month up in Anchorage he said that he realized his mistake – Petersburg would have been a MUCH better choice.

The Pageant was lovely – we had entertainment from the young Norwegian dance troupe in three groups: 1st and 2nd graders, then 3rd and 4th graders, then the 5th-8th graders.  It’s so heartwarming to see so many young people in town participating in all these cultural activities – boys as well as girls. 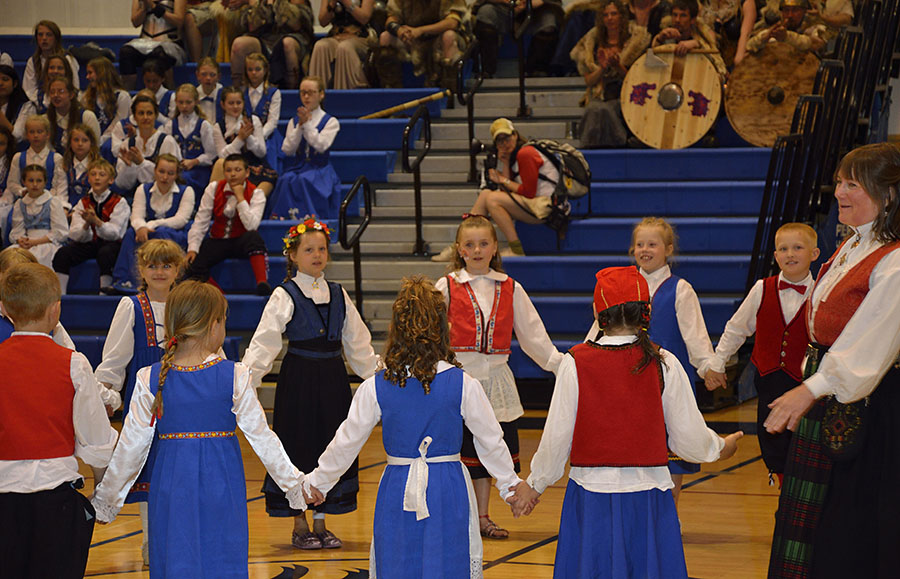 You might notice the vikings and valkyries sitting in the bleachers – they were very well behaved and didn’t try to pillage anything while the youngsters danced.  A few of them even came down and participated in a dance or two.

No Pageant would be complete without joining together in song – first the “I Love Humpback Salmon” song, followed by the “Alaska’s Flag” state song.  As new Alaskans, it was pretty neat to sing the state song standing a few feet from the Governor, surrounded by our new friends from town.

I’ll share the lyrics of the salmon song with you – feel free to sing along, loud and proud. 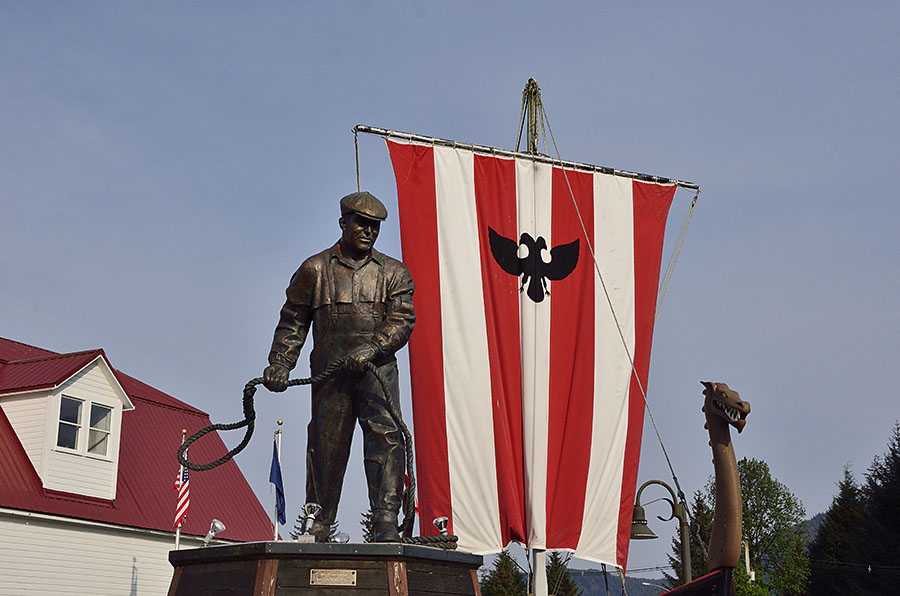 I sang the song, despite the fact that I can’t stand to eat seafood of any kind.  It makes pot-luck dinners and dinner parties a little more challenging to attend here, but it’s fine.

We enjoyed a concert from a jazz group brought in for the Festival, and wrapped up the weekend with a little open house for our local friends.  It’s time to go cruising now, though we’ve found Petersburg to be a very sticky place – hard to leave.

Thanks to all the vikings, valkyries, and the bunad-wearing models and dancers – it was a memorable Festival! 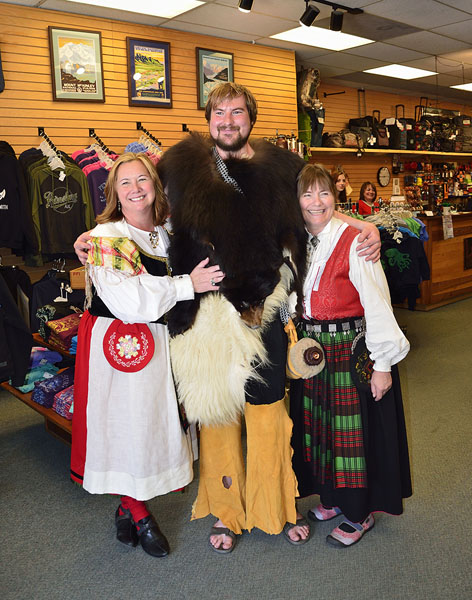