I’ve often mentioned that the communities on the Inside Passage in southeast Alaska are interesting because you can’t get to them by road (with the exception of Haines and Skagway, way up in the northeast corner – but they’re a very long way from anywhere).  Even the state capital, Juneau, is only accessible by boat or plane.  Once we wrapped up the cruising season it was time to go down to Washington (state) and get our car for the winter.  As I describe the process of getting the car here, you’ll be convinced that we’re crazy to go to all that trouble so we can drive on the whopping 35 miles of road (aka the Mitkof Highway) on the island here.  The car will give us access to more hiking and snow shoeing trails, and it will be vital for taking all the camera gear to one of the parks on the north end of the island to photograph stars and the aurora on clear cold nights.  To get it up here, we need to fly to Washington, get our car, and drive it up into Canada to meet the Alaska State Ferry in Prince Rupert.  At this time of the year the ferry only runs once a week so we had a VERY tight schedule to keep.

The first step was to fly down to Seattle.  Since we would be returning with the car we could do some shopping in the Lower 48, and we were armed with long lists of things we needed from big box stores, things that are expensive to ship to Alaska, or things that are just hard to find.  Flying from Petersburg on a 737 we took the “milk run” with stops in Wrangell and Ketchikan on the way to Seattle, and it was a “combi” flight.  A combi is a plane that is half cargo, half passengers and we have a lot of those kinds of flights around here.

We rented a car in Seattle and spent the day running errands, then up to Blaine (at the US/Canada border) for dinner with boating friends, picked up our car, and then spent the next day running around nearby Bellingham with our long shopping list.  We had so many stops that I used an online tool to calculate the optimal route among them all!  It was hectic, but by 8pm we declared success.  Total road miles between places so far: 90 (not including all the running around).

The next morning we drove 340 miles from Bellingham to Walla Walla to visit friends in the southeast corner of Washington.  Along the way we had a check engine light and we caught a rock that cracked our windshield.  Sigh.  We got to Walla Walla (so nice they named it twice!) late on a Thursday, and we only had Friday available to get the car repaired if we were going to make our ferry in Canada.  We got lucky with repairs, had a wonderful time with our friends, and then began the 3 day drive to the ferry terminal in Prince Rupert.  The first day we drove 460 miles up the east side of the Cascade Mountains into British Columbia and stopped in Kamloops for the night.  We passed miles of farms – primarily apples, cherries and grapes (wine!), with trees in fall color (this was back in October).  With election day approaching we saw plenty of signs, including some for candidates for Coroner (you can’t make this stuff up).  Here’s a map to show our entire route: 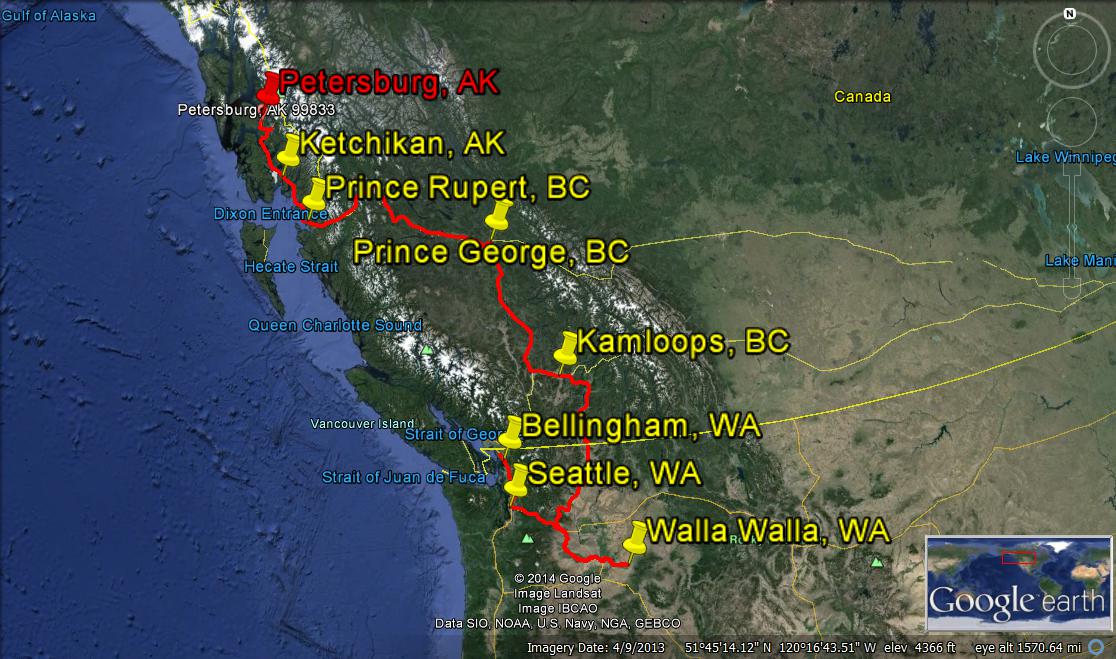 The next day we drove 325 miles from Kamloops to Prince George, BC, going over mountain passes with snow and passing lots of signs to watch for various kinds of wildlife.  We’re used to seeing signs about deer and even moose, but the Dall sheep and wolverines were new ones for us.  The roads were basically 2-lane, fairly lightly traveled; traffic was primarily logging and construction trucks, and once a week a number of cars heading for the ferry.  We got into Prince George early enough to pick up some tire chains at Princess Auto, and to rest up for the last day of driving – 450 miles to Prince Rupert for a total of 1665 car miles in a week.  Whew!

The ferry departed at 0700 the next morning and we had to be at the terminal by 0500 to check in and clear Customs.  Fortunately we decided to get a little cabin on the ferry for the 17 hour trip to Petersburg, so we were able to catch up on sleep and rest since scheduled arrival in Petersburg was 0300. 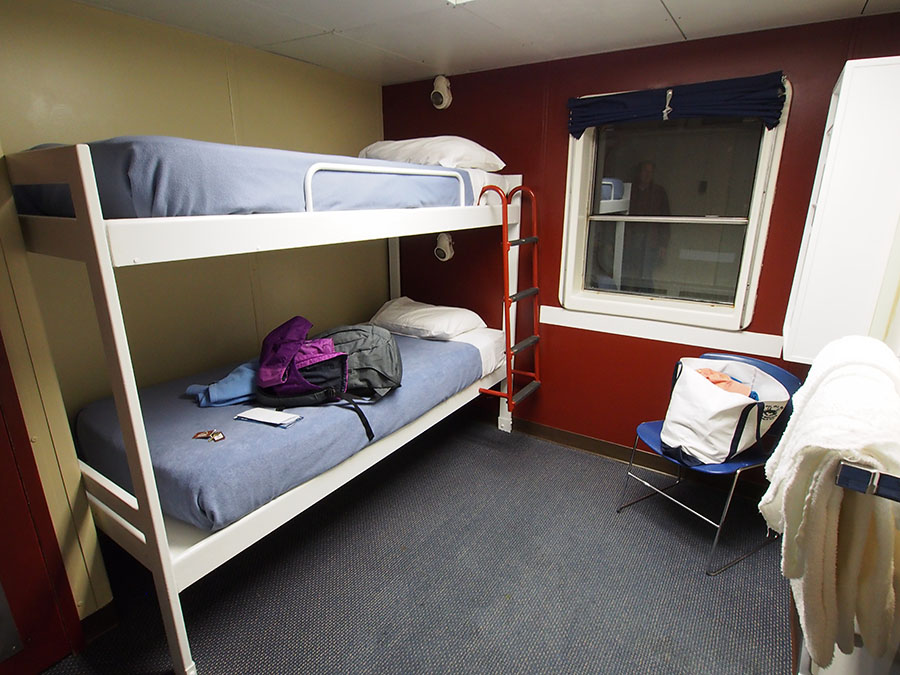 Although the weather was bad, the 352′ ferry TAKU managed to give us a pretty good ride, even crossing Dixon Entrance into Alaskan waters.  We had a few hours layover in Ketchikan, but we stayed aboard to nap, watch a movie, and to give me time to finish a magazine article before the deadline.  It was a gloomy, rainy day – perfect for a little rest. 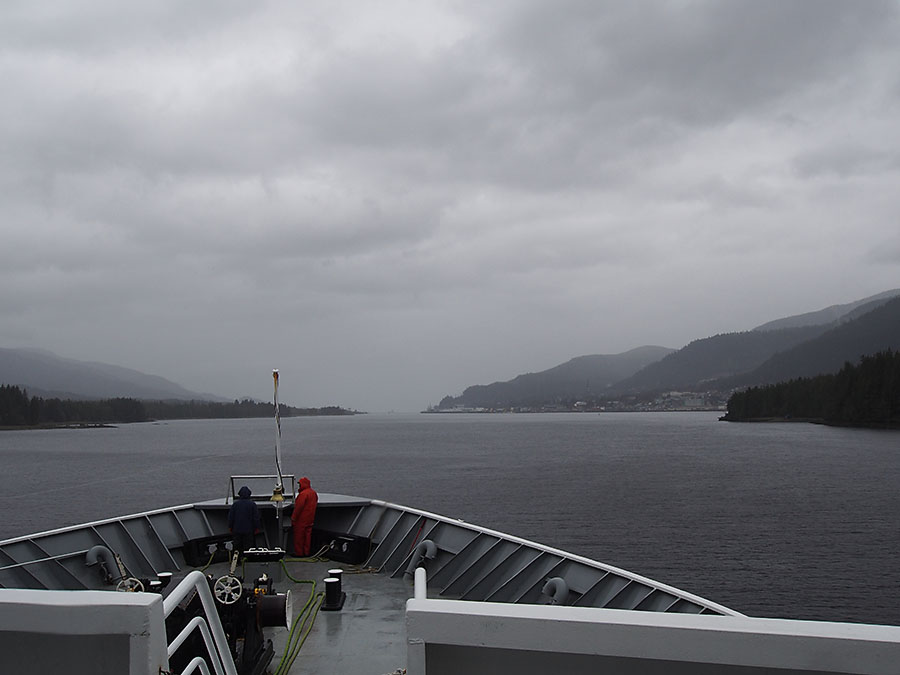 We woke up when we felt the ship starting to wiggle-waggle through Wrangell Narrows around 0200, so we just got up and watched the Captain navigate the narrow passage and were glad we weren’t in our boat trying to share the same channel as the big ferry.

The ferry ride was another 265 miles in addition to all the driving, giving us a total of 1930 miles for this little adventure.  We arrived home to our boat after 8 days away, and we had 6 days to get unpacked and re-packed for the next adventure.

1 thought on “Bringing Our Car to Petersburg”