Fall in Glacier Bay is very different from summer in more ways than just a drop in average temperature.  In the last two weeks of September we had the enormous park almost entirely to ourselves.  There were a few last cruise ships for the season, a few charter fishing boats near the entrance, and maybe one park patrol or research boat running around.  We had to play duck-and-cover as the fall pattern of gales and weather fronts came off the Gulf of Alaska, and the number of hours of daylight were significantly less than in summer – which became a consideration since the distances between anchorages and sights in the park are long.  The puffins and other sea birds are back out to sea, and most of the whales have headed to Hawaii for the winter.  The sea lions and sea otters were still as lively as ever, though the otter pups are now almost as big as their parents. 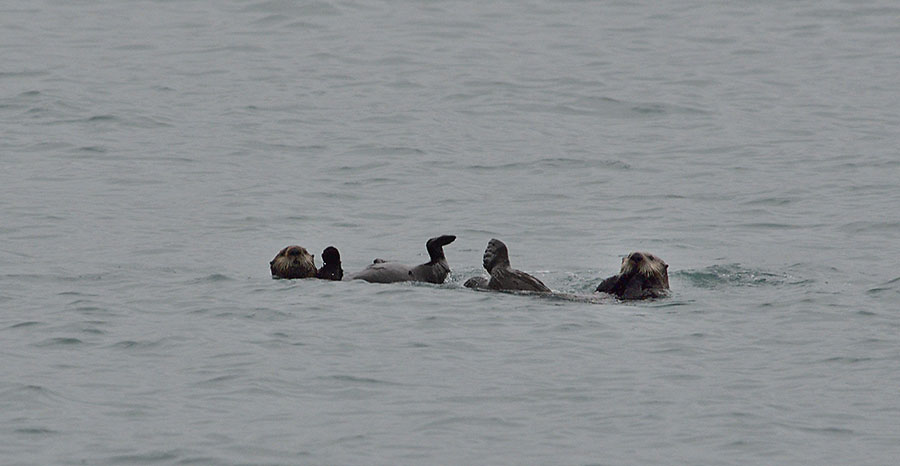 We experienced two really exciting “firsts” on the same day, after watching the mountain goats and dodging brash ice up around the Lamplugh Glacier.  Another weather front was coming in and we headed into Blue Mouse Cove to anchor for the night just as the sun was starting to set.  Nosing the boat closer to shore to check out the anchorage, we spotted a black bear sow and two cubs, though one was black and the other was a gray-blue color, almost camouflaged among the rocks.  Jim passed the big camera up to me and I was able to grab a few fuzzy photos in the fading light just before the bears vanished into the woods.  You have to look closely behind the black cub to see the other one – we were pretty sure it’s a rare “glacier bear” – a blue morph of the black bear (which was later confirmed by the park’s bear expert).

We kept a sharp lookout on the beach the next day in case the little family returned.  Wow – what a great sighting… how do we top that?

The sun set and we had a clear, chilly evening with no moon – perfect conditions for looking at stars, which are incredible so far from civilization and city lights, and that’s when we had our second “first” – we saw the aurora borealis (aka the northern lights).  The aurora has been on my “bucket list”, and we hope to see it many more times during the Alaskan winters.  It was green and it waved gently like a huge translucent curtain.  Absolutely awesome.  Through the evening it was sometimes brighter and sometimes very faint.  It was an amazing day, though we weren’t too comfortable with the strong winds that occasionally gusted into the anchorage.  With the strong wind and bears on the beach the conditions weren’t the best to try to go ashore and photograph the aurora, but we got a better chance the next day.

The weather forecast continued to deteriorate for the next week, though the wind settled down for a bit in the late afternoon and we decided to use the brief lull and the ebbing tide to make a dash for Bartlett Cove – the park headquarters and better protection from the predicted wind direction.  In the off-season the park allows boats to tie to their massive floating dock for up to 10 days at a time, putting us behind the big breakwater to shield us from wind and waves.  That evening the sky was clear and moonless, and luck was with us since the aurora put on its show once again!  Dressed in warm clothes, we took the tripod, camera, star tracker and remote shutter control ashore and set up on the rocky beach to experiment with exposures to photograph the aurora.  The good news is that I got some successful exposures and made notes for future aurora photography; the bad news is that I accidentally bumped the focus ring and everything was quite fuzzy, which I didn’t notice until I downloaded the photos the next day.  Our luck ran out and the sky was overcast for the remainder of our days in Glacier Bay, but we’re ready the next time the conditions are right.  You have to be a dedicated night owl to take good aurora photos – the light is best later in the night, and it gets pretty cold dragging a metal tripod around and standing around waiting for the best effects.

Rainy weather is a good time to head into the forest for some hiking since the thick evergreens provide some shelter from the rain.  Wellington boots are a must for the muddy trails. 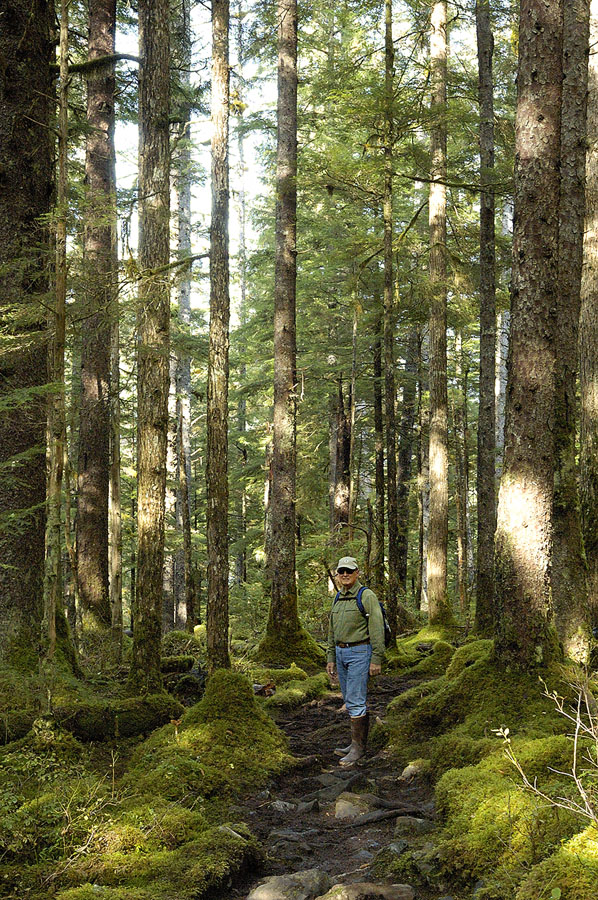 We love to notice the little details in the forest (while keeping “bear aware” and making noise), and the little tiny mushrooms were varied and beautiful. 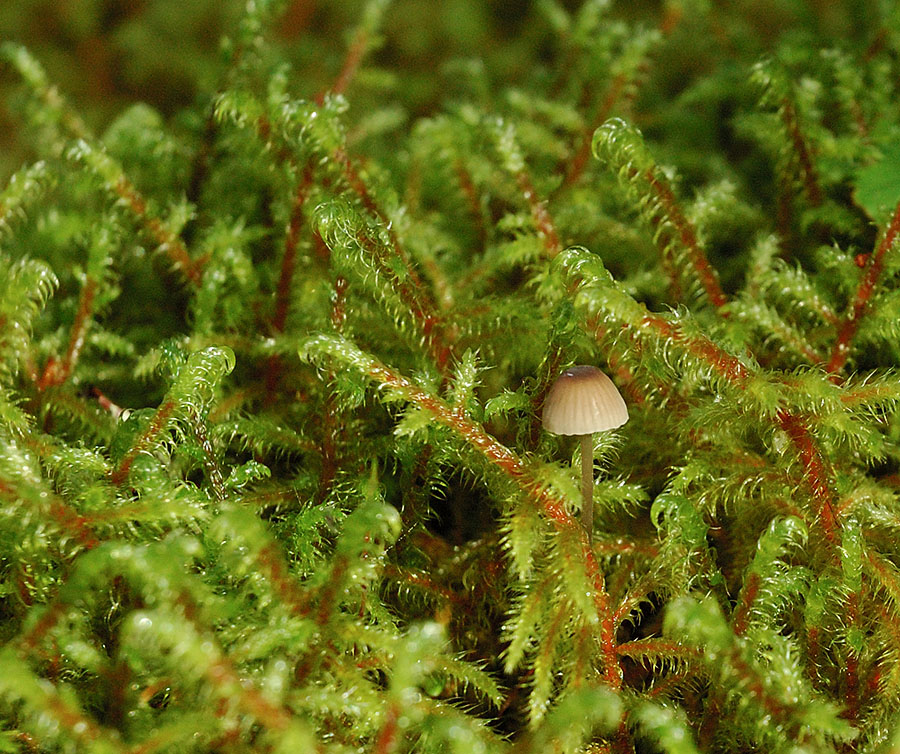 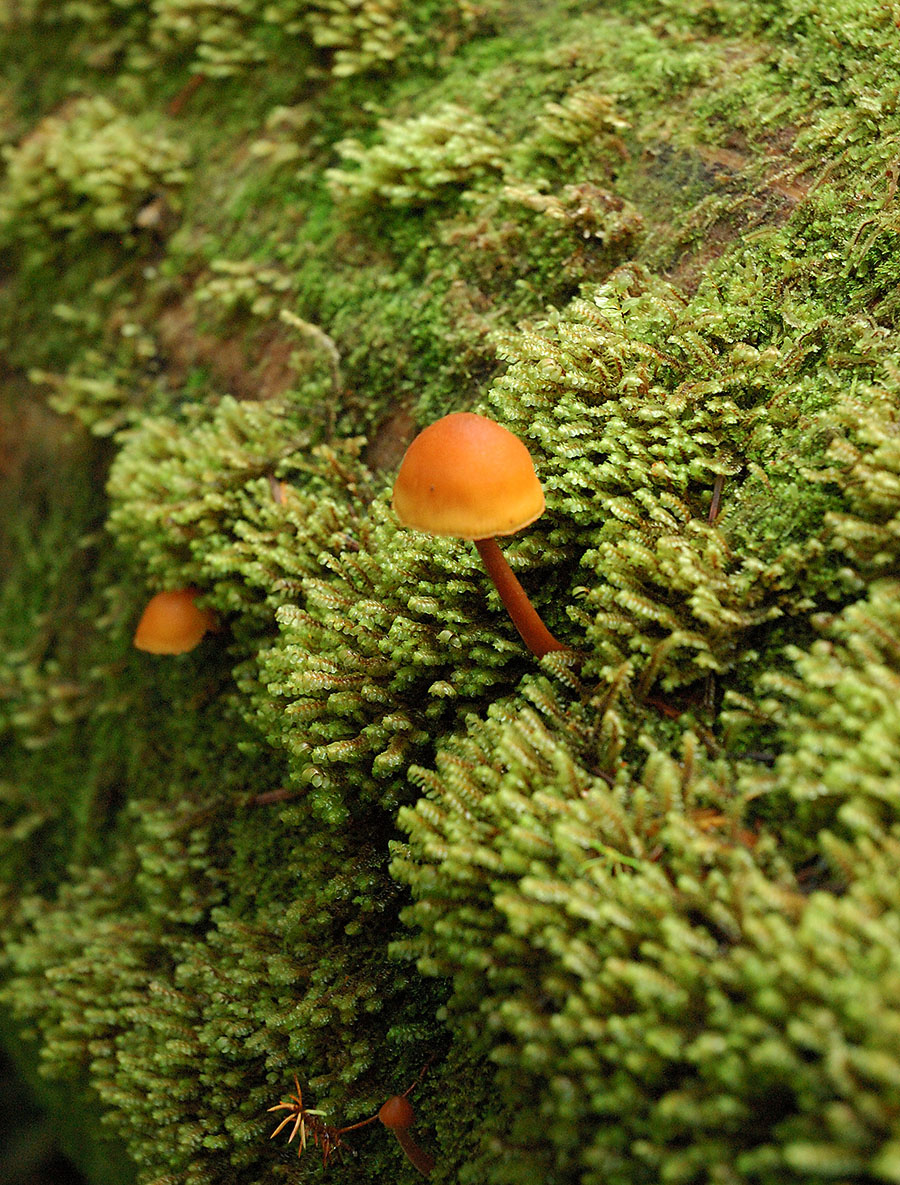 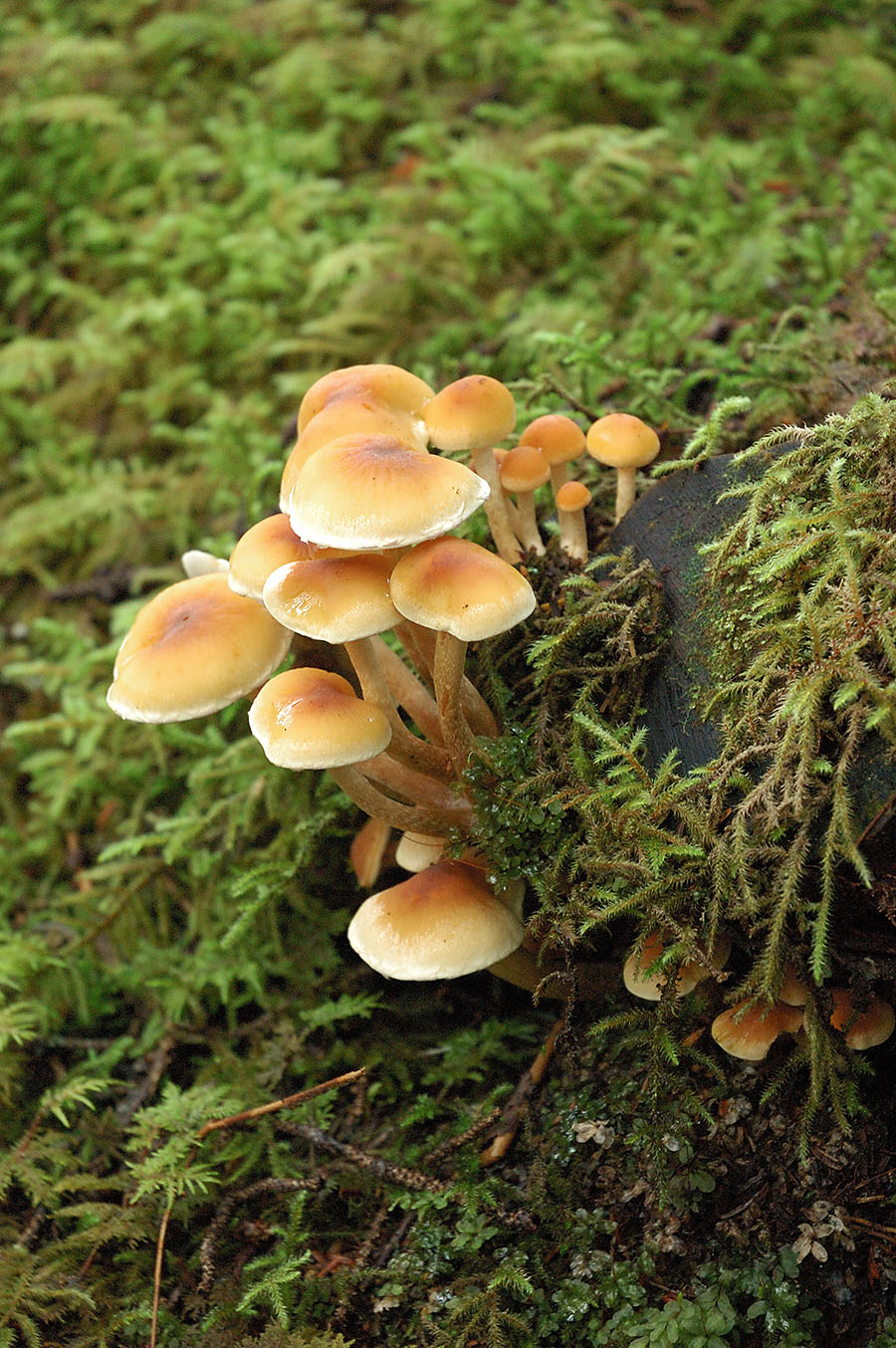 We didn’t see any bears, but we did come across this grouse and I love that they are fairly “tame” and don’t mind people getting too close. 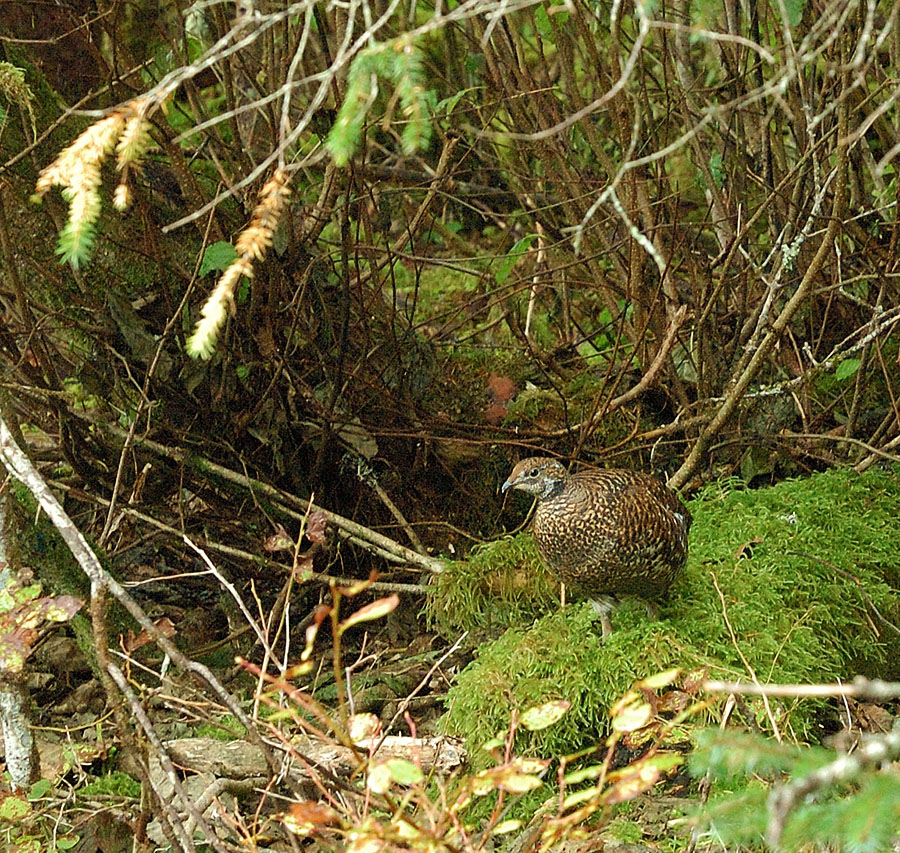 Jim worked on some boat projects and I took the kayak out to explore the cove and to see how far up the creek I could get at mid-tide.  These mergansers were almost camouflaged against the rocks and rock weed, and I passed them before I noticed them. 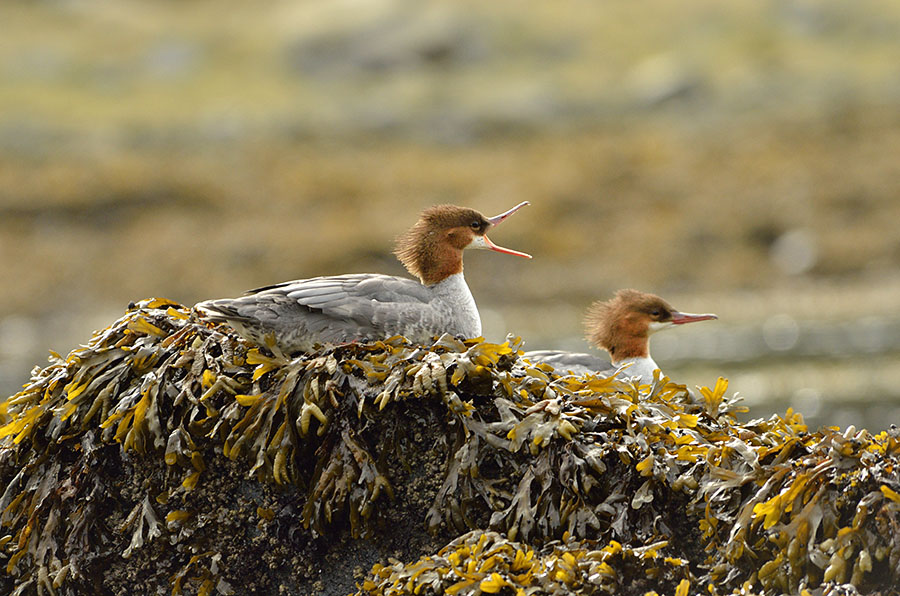 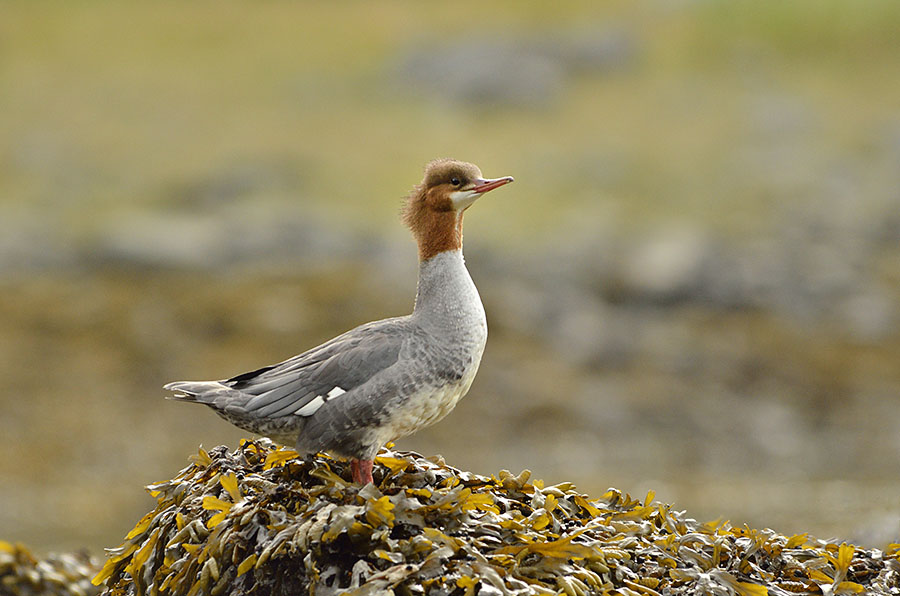 Craving a meal that we didn’t have to cook for ourselves, we got the bikes down and rode about 9 miles up and down the hills to the tiny town of Gustavus for lunch.  At the restaurant… the only one, from what we could tell – good exercise and a fun little adventure.  We had one remaining chore to take care of, and the park dock in Glacier Bay was a good spot to get it done.  We needed to replace one of the sacrificial zincs that protect the underwater metal on our boat (such as shafts, props, and rudders).  It was time to drag out the dry suits, masks and fins and get in the water!  We hadn’t used our dry suits in many years – we spent a lot of more sensible time diving and snorkeling in the Florida Keys and Bahamas the past 8 years or so – but we’re in the high latitudes now and we needed to bite the bullet and find out just how leaky our old suits had become.

Aside from a small leak in one of Jim’s boots, the suits did well and we were comfortable in the water… as comfortable as one can be dressed like the Michelin Man.  We replaced the big plate zinc and we scrubbed the waterline all around the boat.  It was much better to do it here with virtually no current and no sea lions close by.

We were sad to finally leave the park but we’ll be back next season, and with the weather patterns changing we had to start making our way back to Petersburg, via Juneau since we needed some things from Costco and Home Depot.  We stopped in Swanson Harbor for two nights to wait for weather, and we enjoyed the mountain views and wildlife before heading to The Big City. 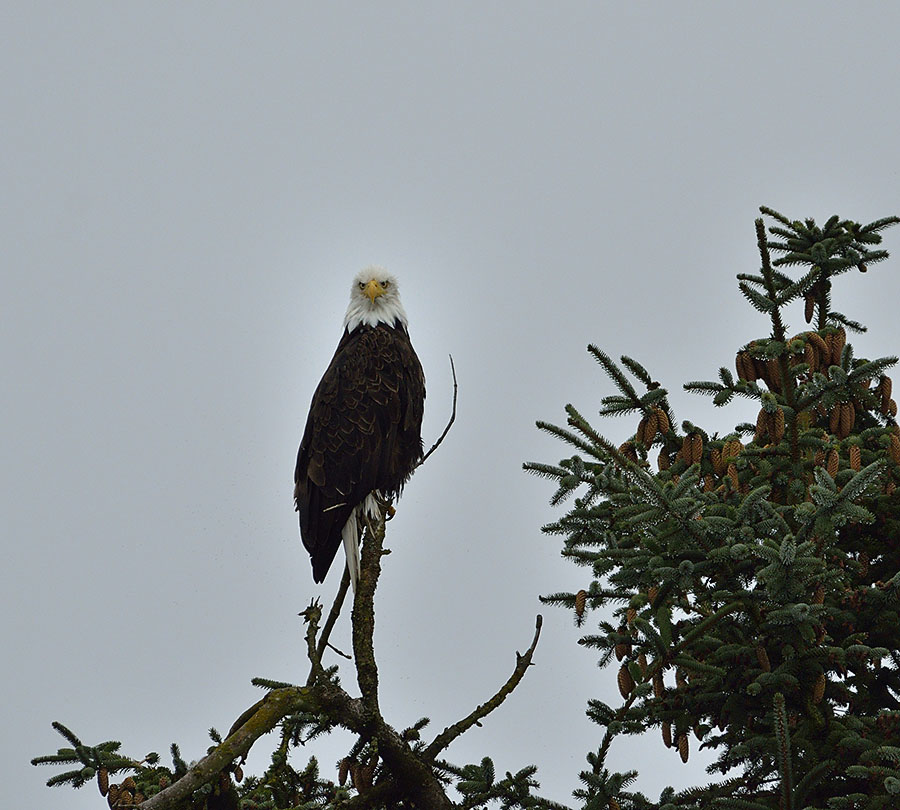