Our first day exploring Denali National Park involved a 5am wake up and 184 miles on a dirt-gravel road in a school bus – it was outstanding and we just loved it!  In fact, the only problem was some extreme frustration because there were so many places we wanted to stop and savor the landscape or to get a better view of some wildlife along the way.  We didn’t get back to our hotel until about 8pm so we put the camera batteries on chargers, grabbed a quick bite of dinner, and fell into bed so we could do it all over again.

Our second day in Denali was a bit less structured – we decided to take one of the park buses up to Mile 66 – to the Eielson Visitor Center so we could spend some time hiking.  We still had to get up at 5am in order to catch a park bus that would get us to Eielson early enough to have plenty of time for hiking, and we arranged for box lunches from our hotel since there isn’t anything available inside the park.

An interesting feature of Denali is that there aren’t that many actual hiking trails – rather the park is just open wilderness and you can hike anywhere.  Along the first few miles of the park road there were temporary signs closing that area to hiking because it was moose mating season.  Moose are grumpy and dangerous enough on a good day; I hate to think of how much worse they can be when they’re rutting.  But the good news is that we saw a number of moose… 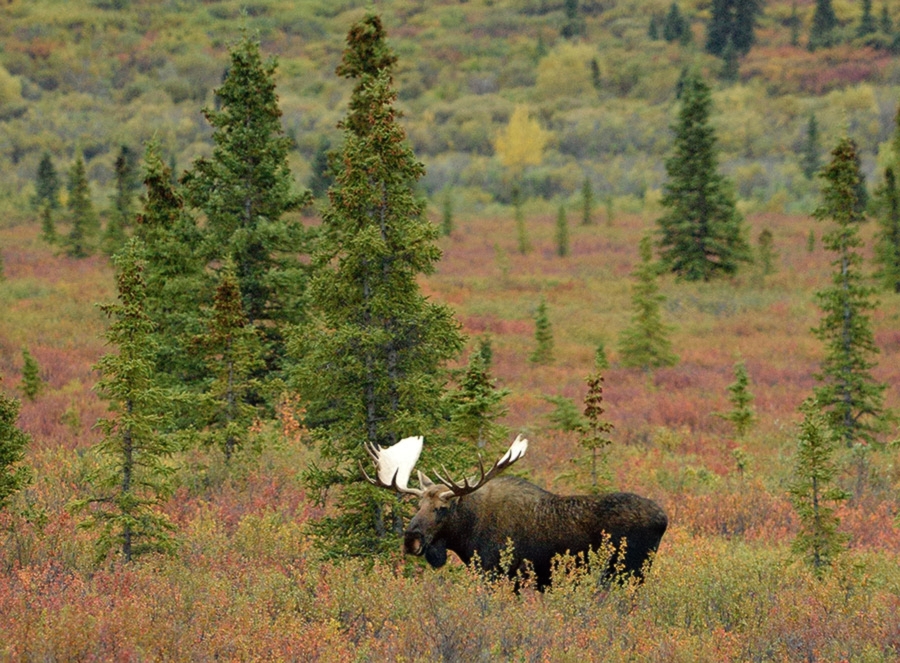 …and one was very close to the edge of the road.  (I wonder how thick the steel is on a school bus?) 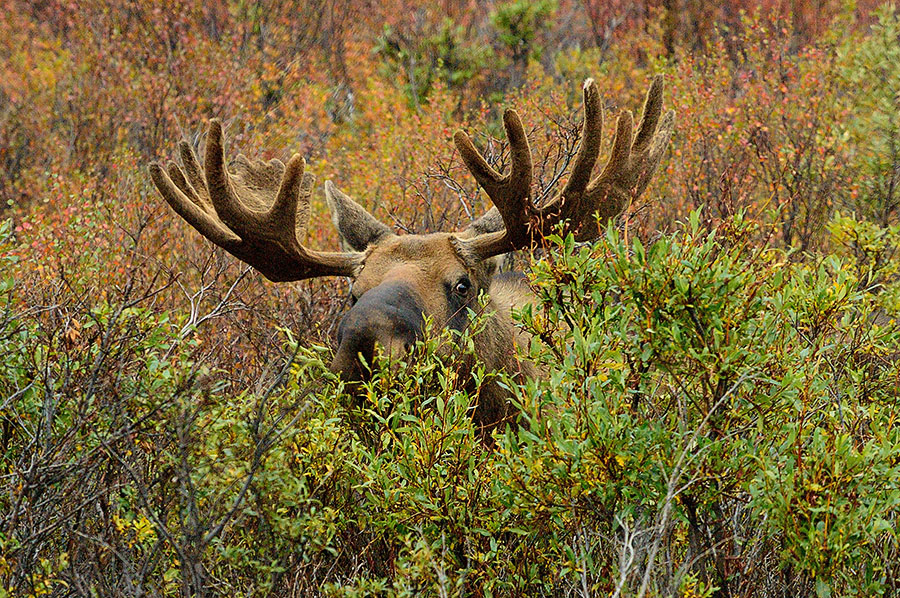 We were most excited about the moose, caribou and Dall sheep since they aren’t things we see down in SE Alaska very often.  We saw a number of brown bears, though they are called “grizzlies” in the interior and they are smaller than the coastal brown bears that we’re used to because they don’t have all that salmon in their diet. 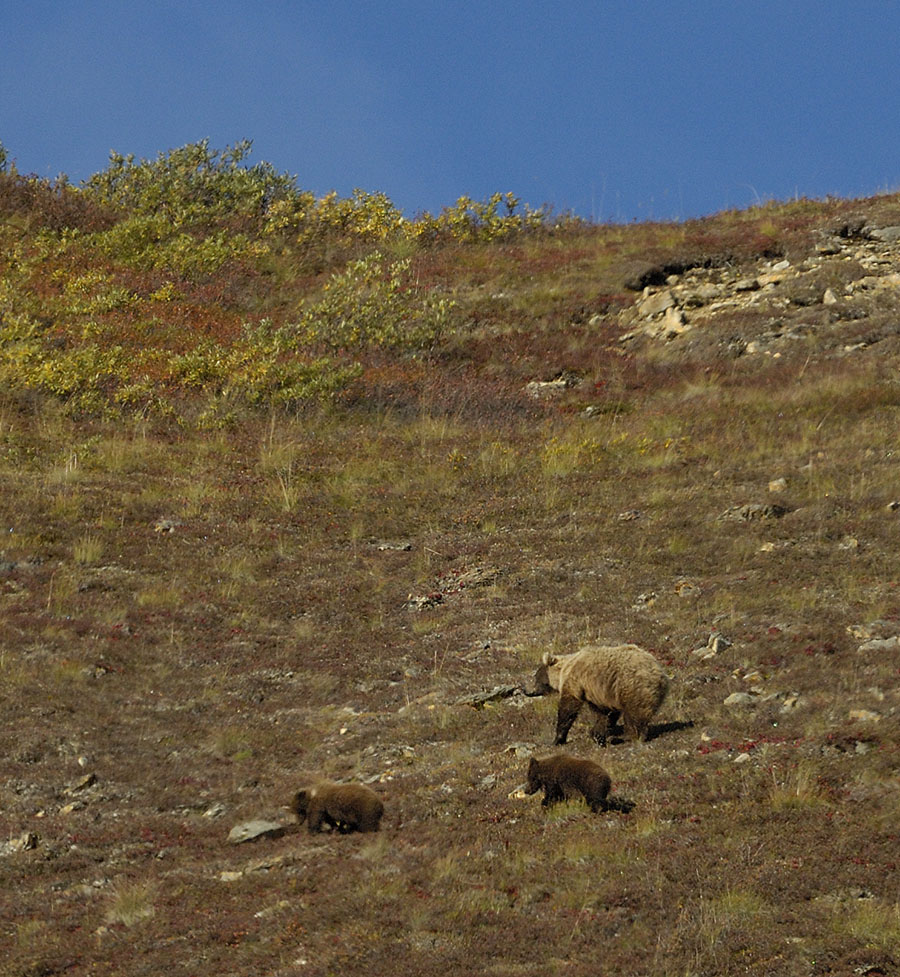 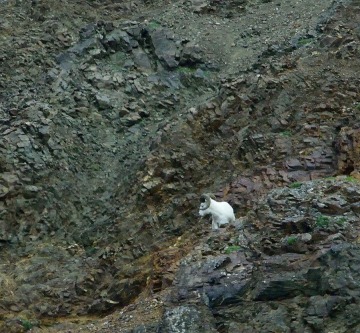 We saw a number of Dall sheep up on the mountainsides, though they were usually too far away for good photographs.  This ram came down a bit lower so we could get a better view.  Sometimes it’s hard to decide whether to just look at them with powerful binoculars or try to get a photograph, hand-holding a long lens.  Regardless, any wildlife sighting is a thrill.

We had a number of caribou sightings, and they are impressive with their huge antlers.  One caribou even ran across the road in front of our bus! 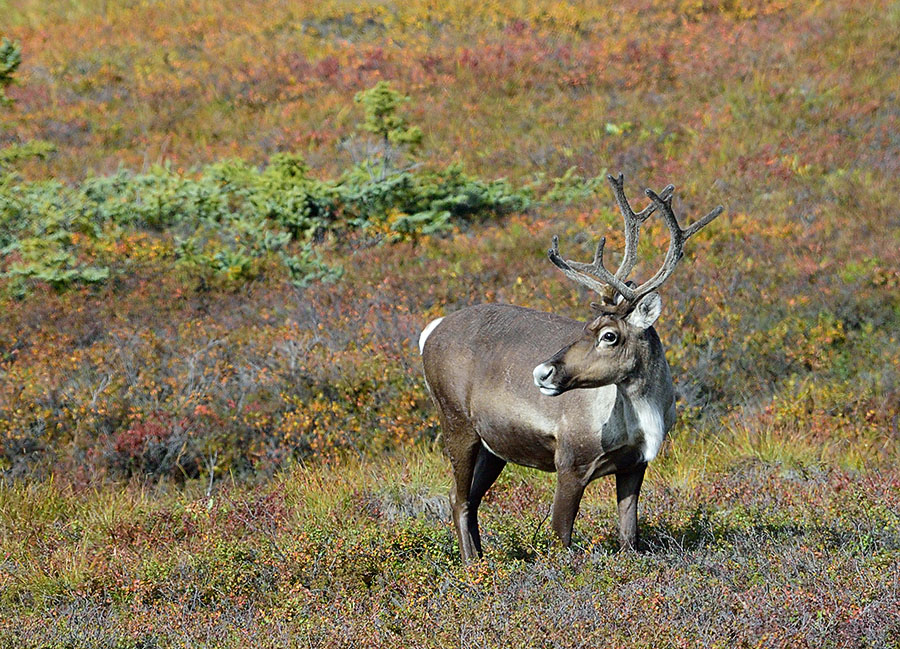 My favorite was this one, though, silhouetted against the late afternoon sky.  He’s a beauty! 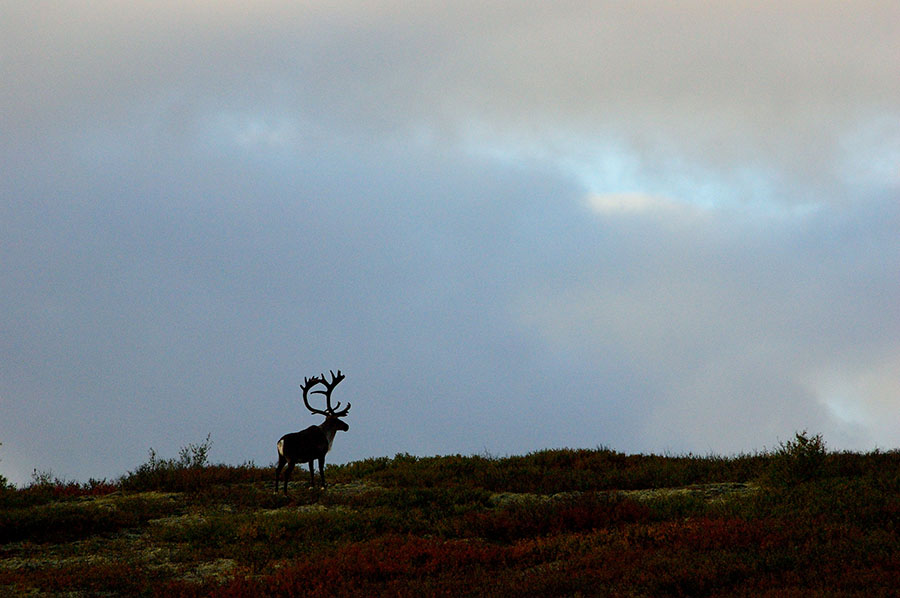 We finally got to the Eielson Visitor Center and began to appreciate the views we had the day before.  Our second day was overcast which made the chilly temps feel much colder, and we never saw the mountain (THE mountain) all day.  We decided to hike up the Alpine Trail behind the center, through the high tundra.  It wasn’t a very long hike but it was very steep, climbing over 1000′ feet on a mile-long trail. 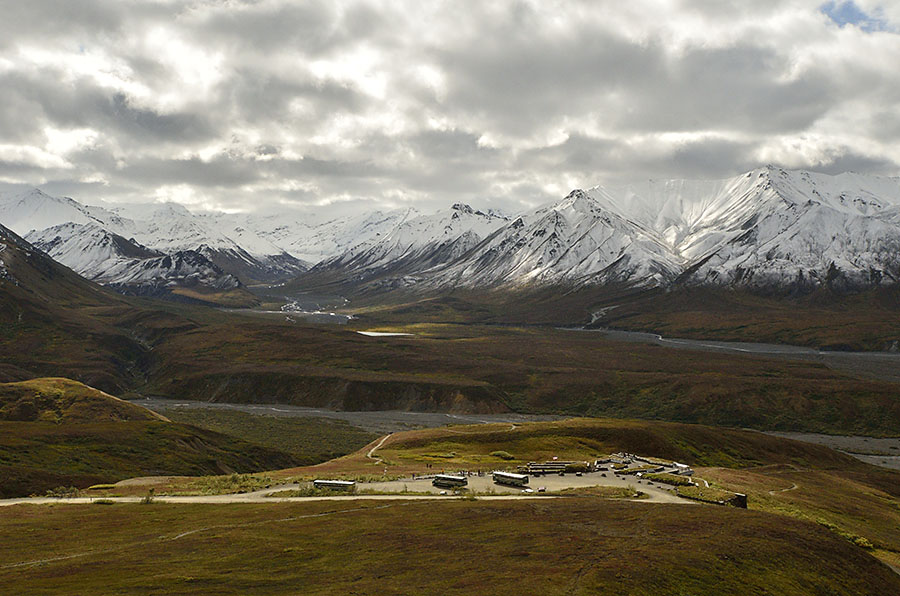 We stopped often to catch our breath, but we were lucky enough to hear and then see some little pika – 6″ long mouse-like animals that live in the rocky high country.  They don’t hibernate, so they were very busy gathering food to get them through the long winter.

The tundra seems plain and barren, but there was a lot of subtle fall color in the various plants and the lichens growing on the rocks.  The views along the trail were grand sweeping landscapes, though they would have been even better if we could have seen the mountain from up there. 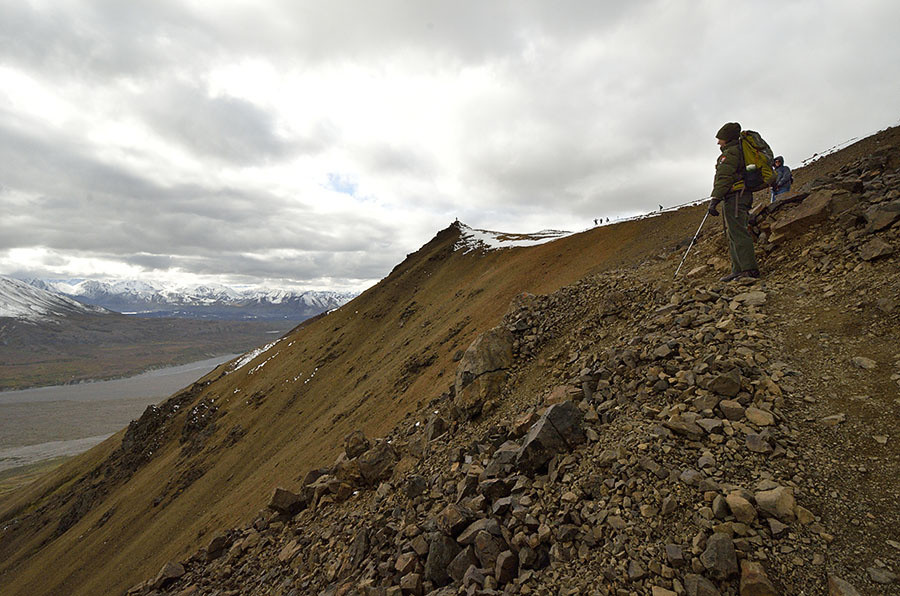 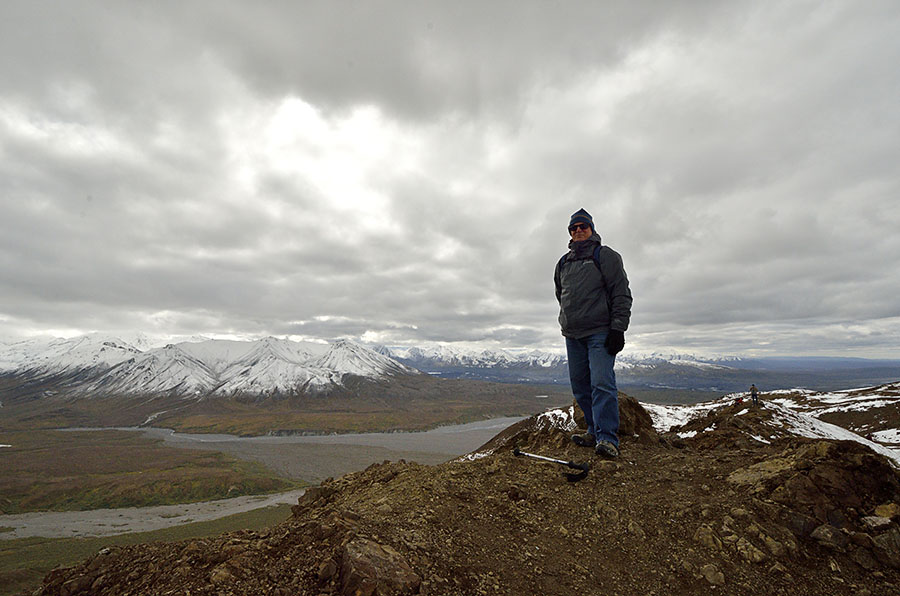 As we got higher up the mountain the wind really made us feel the cold, and we were glad we brought some layers of clothing, warm hats, and gloves.  It was very strange to be standing on snow on August 31st, but that’s Denali.  As of today, the park road is completely closed due to snow, only accessible by dog sled until spring.