It was a relief to escape from the Big City atmosphere of Juneau and head north up the long, straight Lynn Canal towards Haines and Skagway.  If you look at a map of SE Alaska (the “panhandle”), the biggest long stretch of water is Chatham Strait which becomes Lynn Canal north of the Juneau area.  Geologically this long stretch of water is actually a continuation of the San Andreas fault down in California.

Lynn Canal is a disappointing name for a beautiful 6 mile wide waterway with tall mountains capped by snow and hanging glaciers along both sides.  The little towns of Haines and Skagway are not often visited by cruising boats since they are about 65 miles from Juneau, with nothing in between.  The canal has a tendency to get strong winds funneling along its length, so it’s important to watch the forecasts.  We had a beautiful day for the trip north, though we had to keep a sharp eye out for gillnetters – 40-ish’ commercial fishing boats each with 1800′ of net strung across the water.  The net can be hard to see unless you’re pretty close to it. 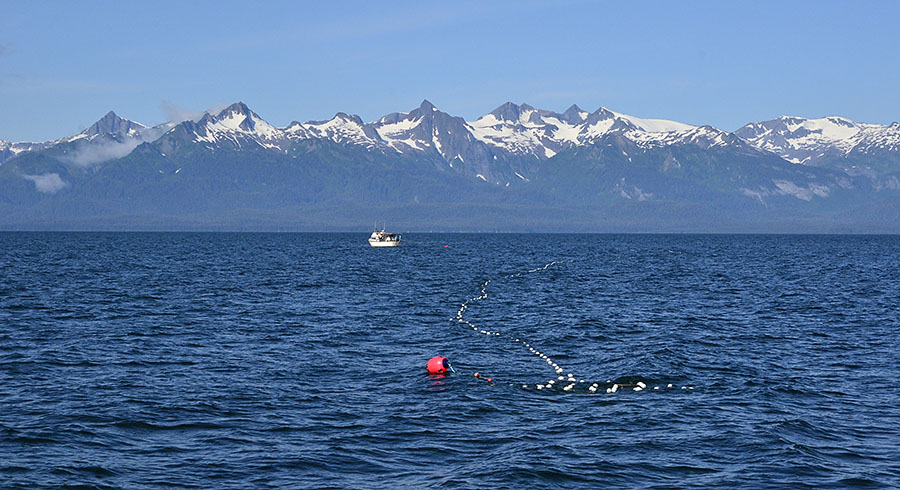 We didn’t realize that a window for commercial fishing had just opened, and we had to do a bit of zig-zagging to avoid all the nets.  If you look closely in the photo below you can see all the little white dots – those are gillnetters up ahead and each one has its own net to avoid.

Since the gillnet boats are relatively small they don’t have the capacity to hold a lot of fish.  Stationed nearby are much larger “buy boats”, and the gillnetters zip over to the buy boats to offload their catch before going back out for another set of the net. 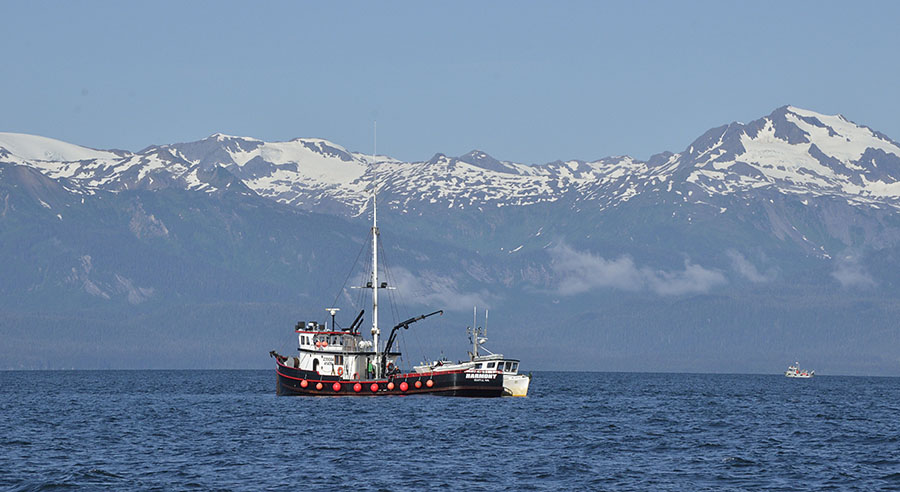 It was very interesting to learn more about this type of salmon fishing, and the fishermen were friendly and very willing to explain things to us. 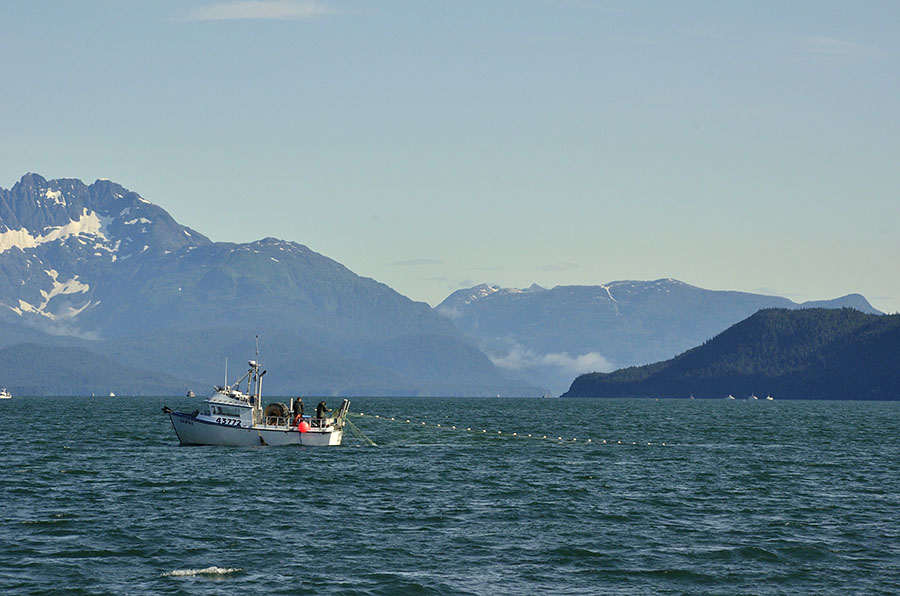 As we got farther north the canal narrowed and we encountered the strange effect of a glacial river meeting the salt water.  The river carried a lot of putty colored silt from the glacial moraine, and there was quite a striking line where the waters met.  Note the glacier in the background – there were a number all around us in the mountains. 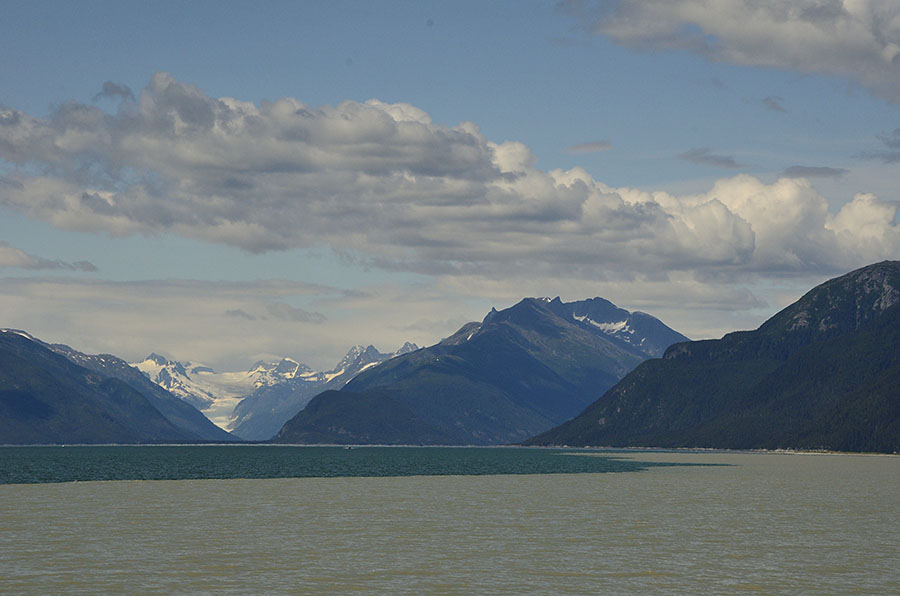 Haines was the opposite of Juneau, and we really liked it.  The people were very friendly and the town marina was terrific.  They offered us the commercial price for fuel so we filled the boat.  The town was down-to-earth and friendly, and it only gets one cruise ship per week so it has a nicer balance of tourism and fishing unlike some of the other towns that are overrun with ships every day.  We loved watching the local people just enjoying a summer day, despite the fact that the water temp was in the high 40s.  (!) 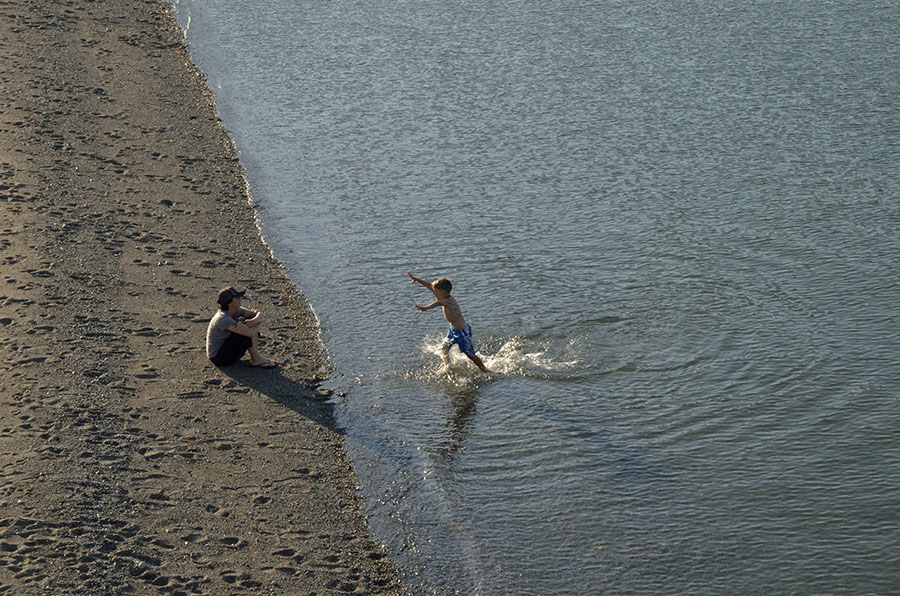 What makes Haines and Skagway different from all the other towns in Southeast Alaska is that they have a road that leads somewhere.  Even Juneau, the state capital, is landlocked and only accessible by boat or plane.  With the road, Haines and Skagway get visitors by RV as well as a number of Canadians who keep boats here.

With the proximity of a road to explore and the promise of a warm sunny day (after a few weeks of too much rain), we decided to rent a car, grab our passports, and venture up into Canada’s Yukon Territory for a day. 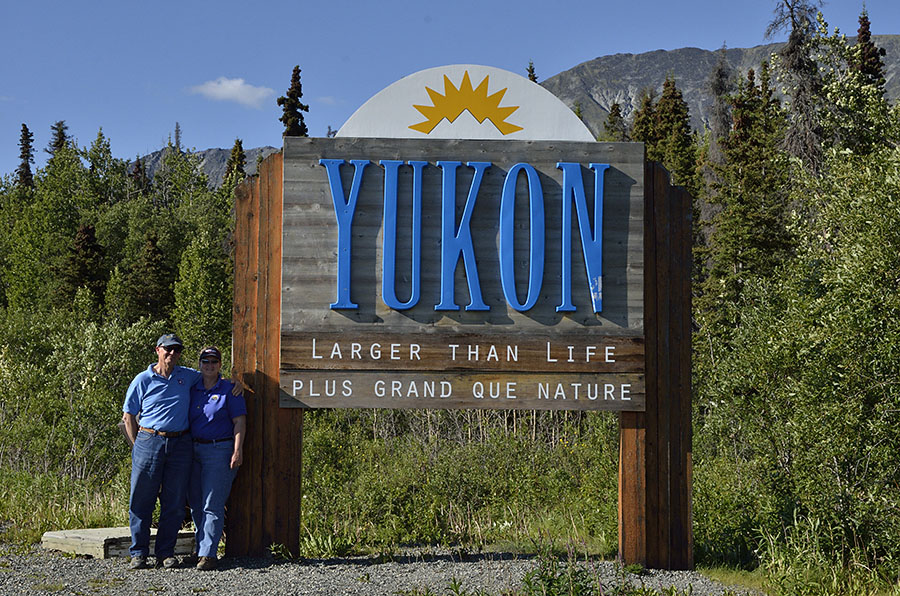 The Canadian border is very close to Haines – less than 40 miles, and the landscape changes so much as you drive over the mountain pass, through a little piece of British Columbia, and into the Yukon.  It was just gorgeous. 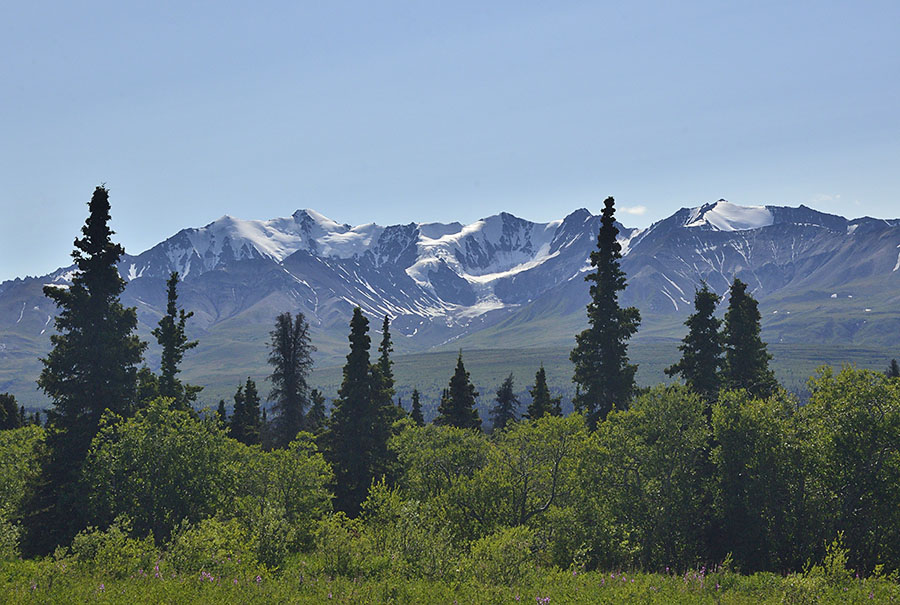 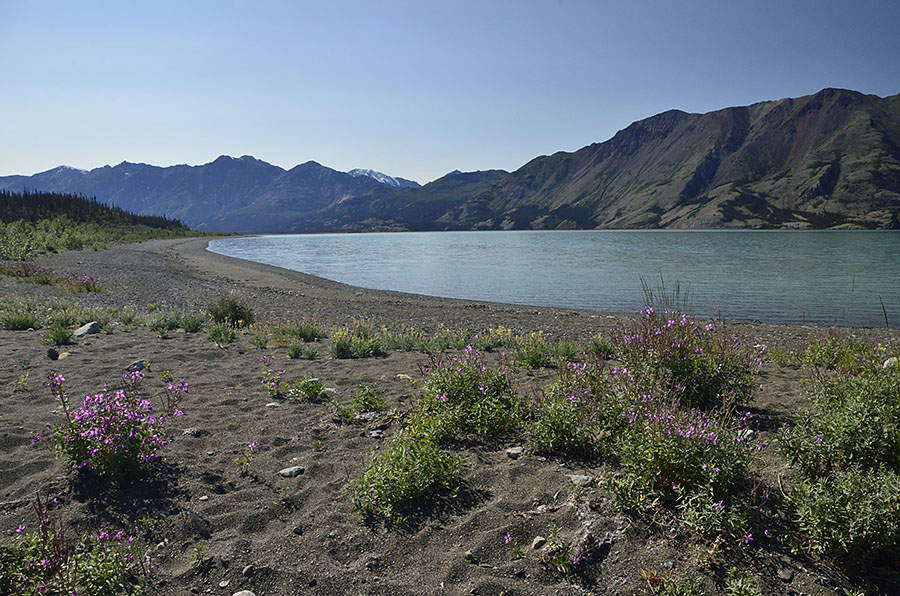 This wilderness is protected as part of Canada’s Kluane National Park, as well as a BC park and the adjacent Wrangell-St. Elias National Park in the main part of Alaska.  It’s the largest protected land mass in the world, and from the little we got to see it deserves all the protection it can get. 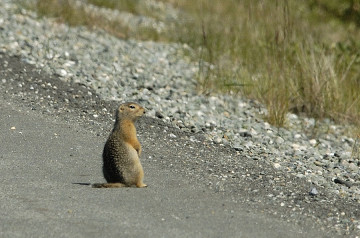 We encountered these adorable little arctic ground squirrels on the Haines Highway, particularly numerous in a 10 mile section of meadow in the high plateau.  We thought they were very cute until we learned that they tend to try to cross the road just as a car is zooming by, and they occasionally get indecisive in the middle of the road.  We went from being enchanted by them to being terrified of hitting one… and thanks to Jim’s quick reflexes we missed even the most suicidal of them.

We drove up the Haines Highway to the tiny town of Haines Junction where it intersects the Alaska Highway (formerly called the Alcan Highway) in Yukon Territory. 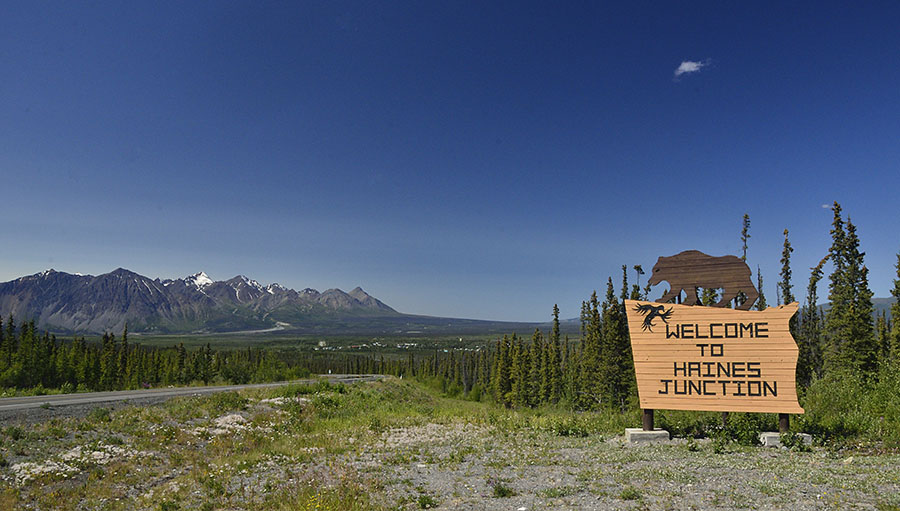 From there we headed west for a while, though one RV fellow warned us not to go too far or we would be in a long stretch of no-man’s land.  Shortly after we turned around to start heading back we spotted a nice brown (grizzly) bear in the brush off the side of the road, busily eating berries.  Jim stopped the car and backed up, and the bear didn’t seem to care.  We were able to get fairly close to the bear standing on the shoulder of the road, and he rarely looked up.  Summer is the time to fatten up for the long cold winter, and the bears up here don’t have the luxury of salmon like the coastal brown bears do. 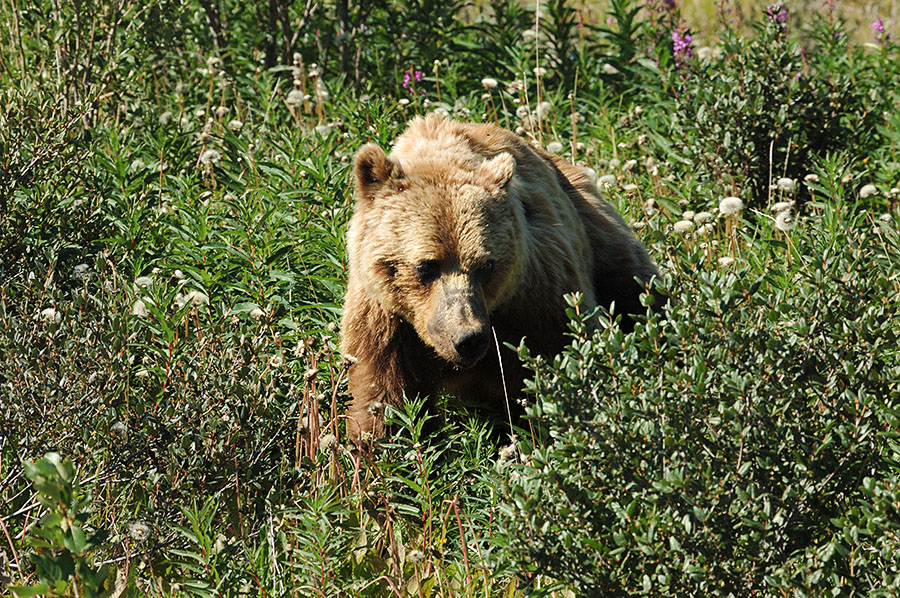 Actually it was hard to get a good photo of the bear because he kept his head stuck deep in the berry bushes. 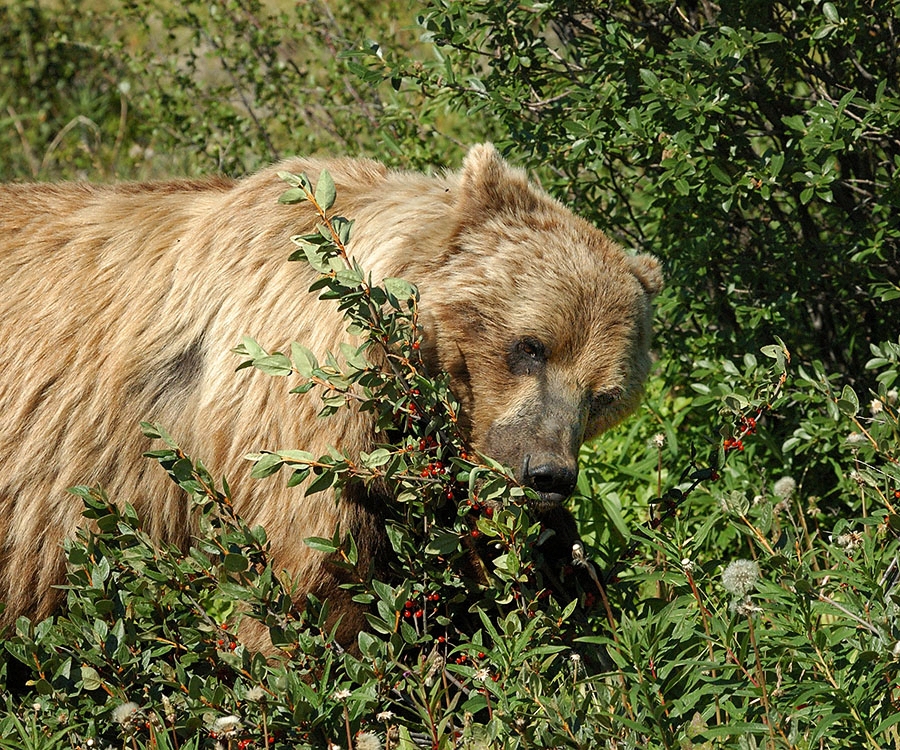 We hadn’t seen much wildlife all day – the grand landscape was more than enough to make us happy… but the close bear sighting was a real bonus!  And just as I was saying “gee, now I only wish we had seen a moose today…”, Jim pulled the car off to the shoulder and pointed down at a pond below us – voila, a moose.  The sun was getting low and the light was tough for photography, but seeing the moose was the cherry on top of the whole day’s adventures. 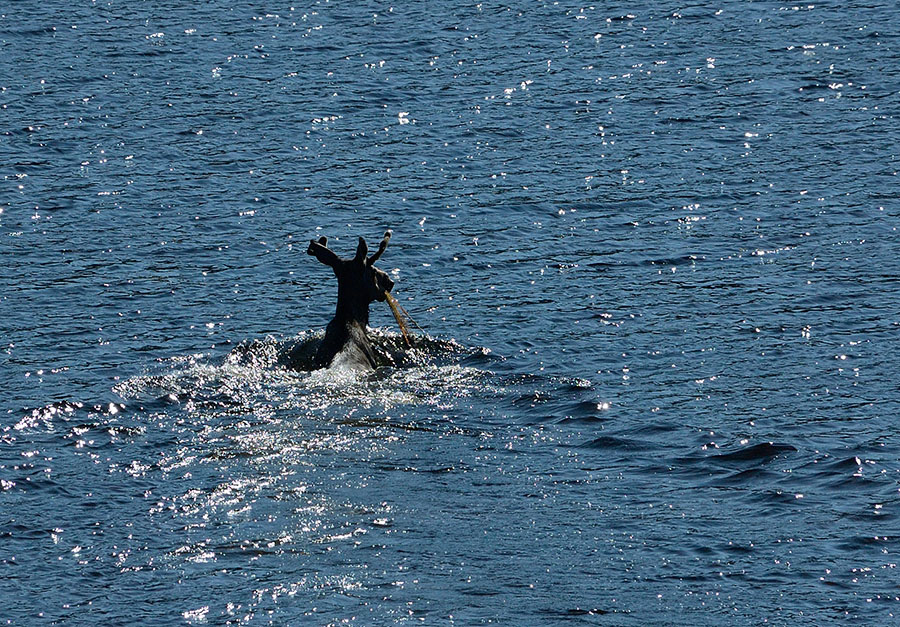 We arrived back in Haines after poking around the Chiklat River on the way, and we were greeted by a nice view of the harbor and mountains and our boat waiting for us.  We couldn’t have asked for a more perfect adventure for our first time in the Yukon. 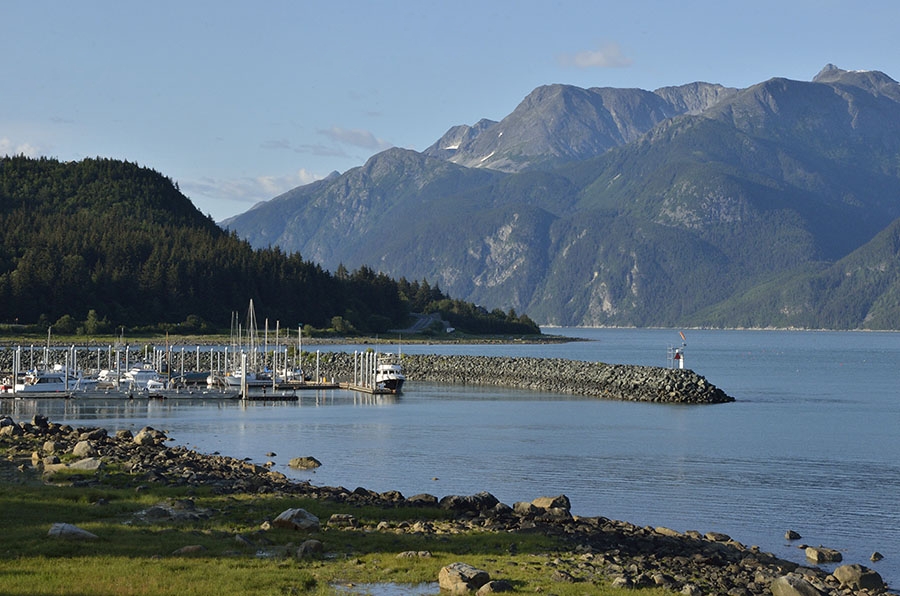 2 thoughts on “Haines and a Yukon Adventure”