We have seen and experienced so many different things in Glacier Bay National Park that I’ve been struggling to decide which stories to tell.  The wildlife is so plentiful and varied, but for this post I’ll focus on the glaciers since they represent history – they are creating and changing history as they advance and retreat.

If you look at the photo above you can see a glacier winding its way through the mountains, and at this distance it looks like its description – a river of ice.  A glacier is formed when snow falls upon snow, eventually piling up and compressing until it forms solid ice.  Over time ice continues to accumulate and compress until the weight of the entire mass (now a glacier) begins to move, scouring the land underneath it and pushing dirt and odd rocks ahead of it (glacial moraine).  Did you know that once a glacier retreats the land rises?  It’s called “glacial rebound” and the land at the mouth of Glacier Bay continues to rise at the rate of a few inches per year. 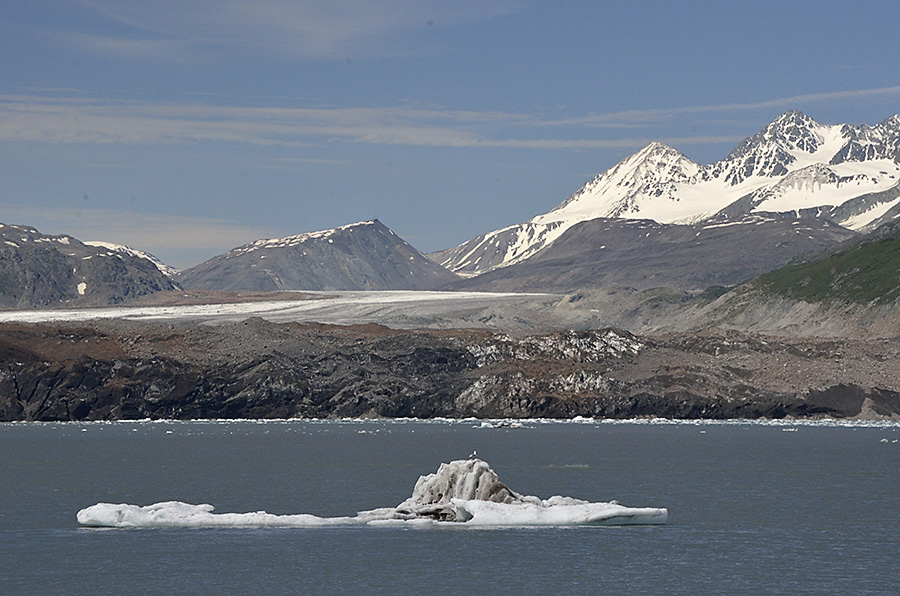 The photo above shows the Grand Pacific glacier, which is retreating.  Its face will probably cross back into Canada in my lifetime.  You can see the curving ice river towards the left, and the face which is almost entirely covered by dirt and rocks.  The bergy bit floating in the foreground calved from the Margerie glacier just to the west.  Of course, the photo doesn’t give any sense of the massive scale of the glacier – until you see a recognizable object up against it, you can’t imagine how big it is – the Grand Pacific is 2 miles wide at its face, it runs for a length of 34 miles, and it is between 60-180 feet thick.

This photo shows the smaller Reid glacier, only 3/4 mile across and less than 10 miles long, and if you look carefully you’ll see some people near its face – they look like tiny dots. 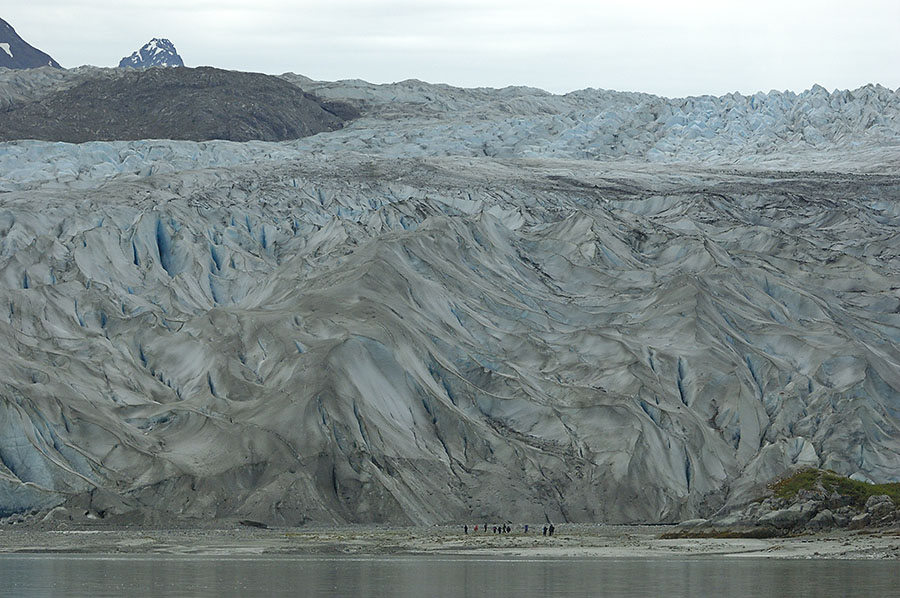 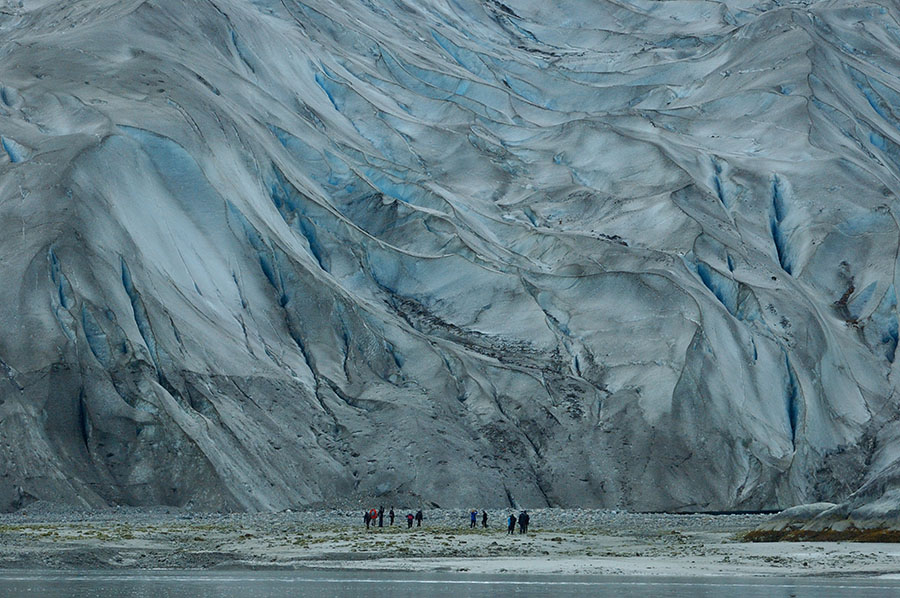 I’ve read that the ice on the face of these glaciers is approximately 200 years old – so we felt like we could reach out and touch “history”.  We were able to hike up to the edge of the Reid glacier, and we can tell you that “history” is very cold! 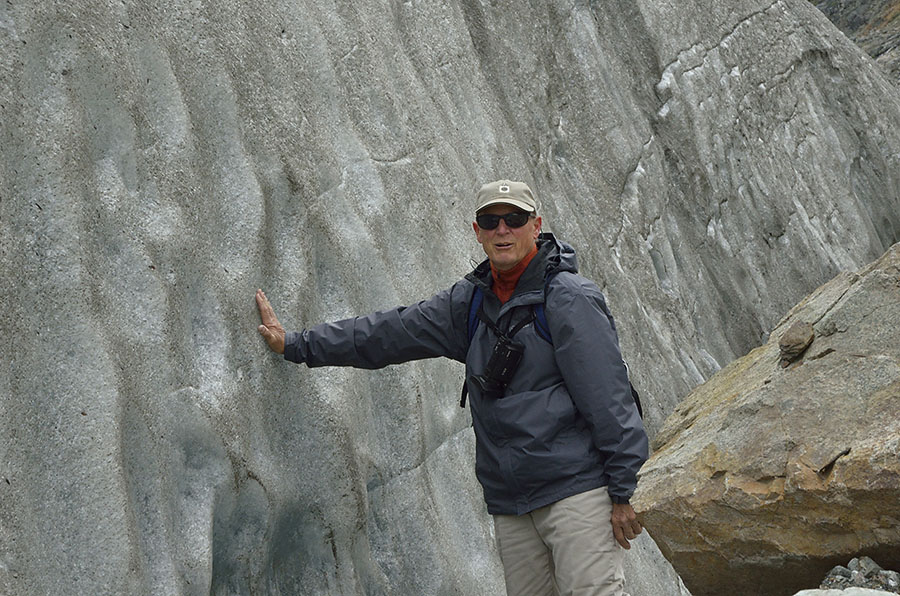 We were actually able to anchor in the basin created by the Reid glacier, and the mouth of the cove was formed by the terminal moraine – the biggest pile of dirt and rocks pushed along by the glacier before it started to retreat.  We were anchored a mile from the glacier face, and the water in the cove was an opaque turquoise turning into a putty color closer to the face – caused by all the silt from the glacier. 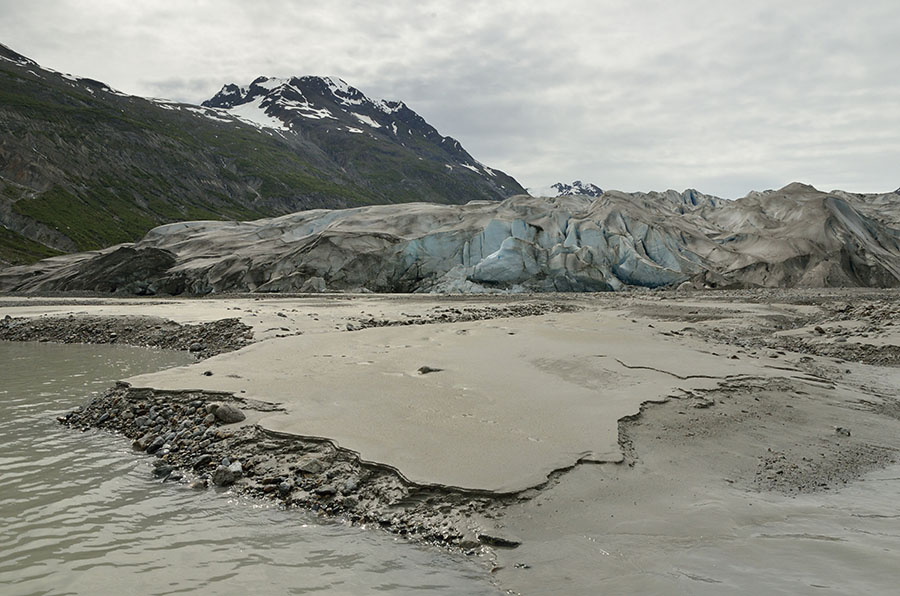 At low tide it was interesting to see the fine silt and rocks carried by the glacier, and looking outwards it’s easy to see the classic “U” shape of a glacier-carved valley.  (Water carves land in the shape of a “V” and glaciers carve a “U”.) 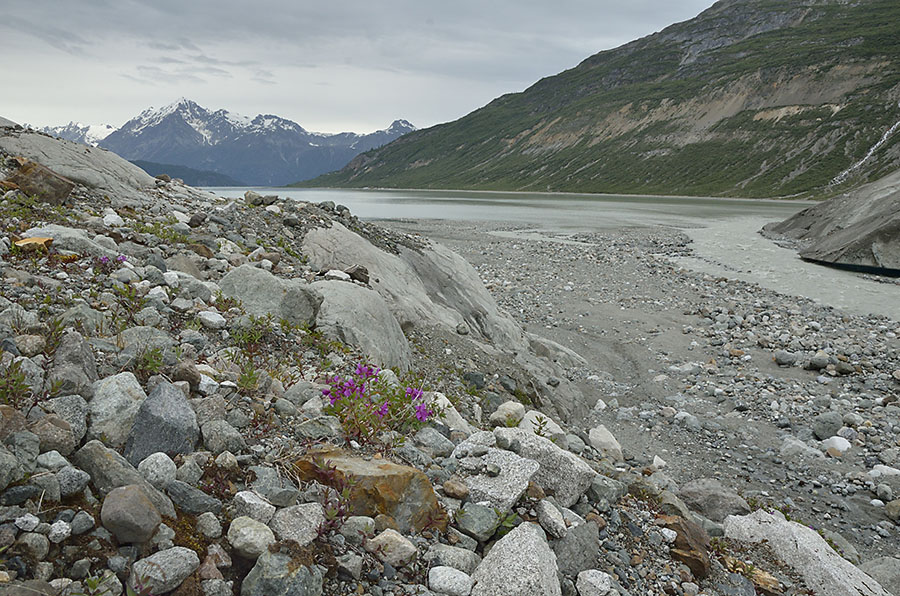 Here you can see how scoured and barren the land is when a glacier retreats.  The foreground is mostly boulders and rocks, with just a few small scrubby plants starting to take hold – a dwarf fireweed in this photo.  Glacier Bay is a perfect laboratory to study “plant succession” – how plant life establishes itself as a glacier retreats.  If you remember from the last post, I mentioned that all of Glacier Bay was covered by a single massive glacier only 250 years ago.  The plant life found at the mouth of the Bay is the oldest since that land was uncovered first, and it is now a lush forest.  With so many glaciers in various stages of advancement and retreat, some hanging in the mountains and some tidewater glaciers coming right to the sea, scientists can study all phases of plant succession in real time throughout the park.

The park manages some of the areas in the Bay because of wildlife, and one of the inlets was closed until July 1 for seal pupping.  We were able to head into the inlet to the Johns Hopkins glacier a few days after it opened, though it was choked with brash ice.  Even a small chunk of ice the size of a softball or basketball can bend a prop blade, so we had to be very careful and pick our way through.  It’s also important to keep looking behind since the wind and tidal current will move the ice around, so a nice clear path going in might not be so clear on the way back out. 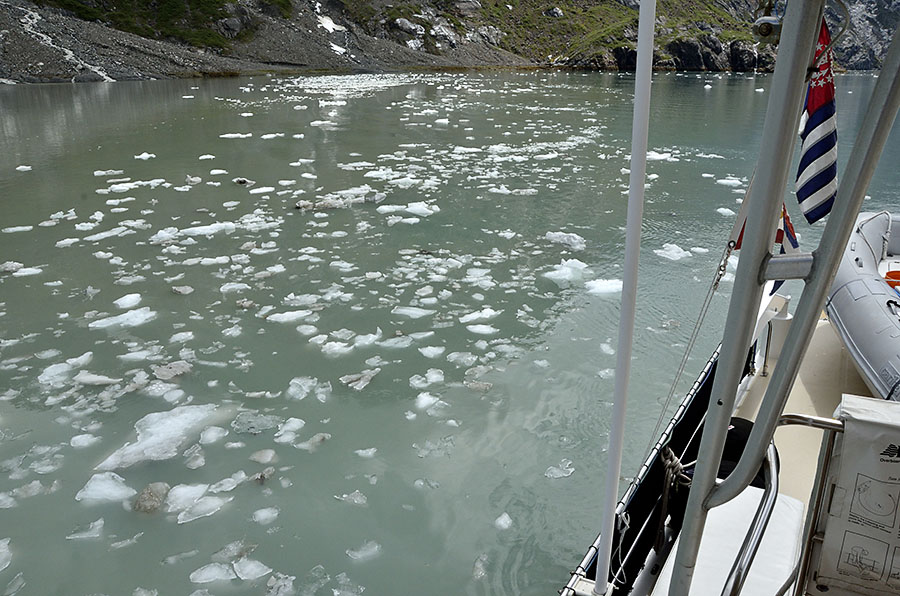 It was a fun challenge to pick our way closer to the beautiful Johns Hopkins glacier, and we saw other smaller glaciers along the way, as well as some seals still hanging around on the bigger bergy bits. 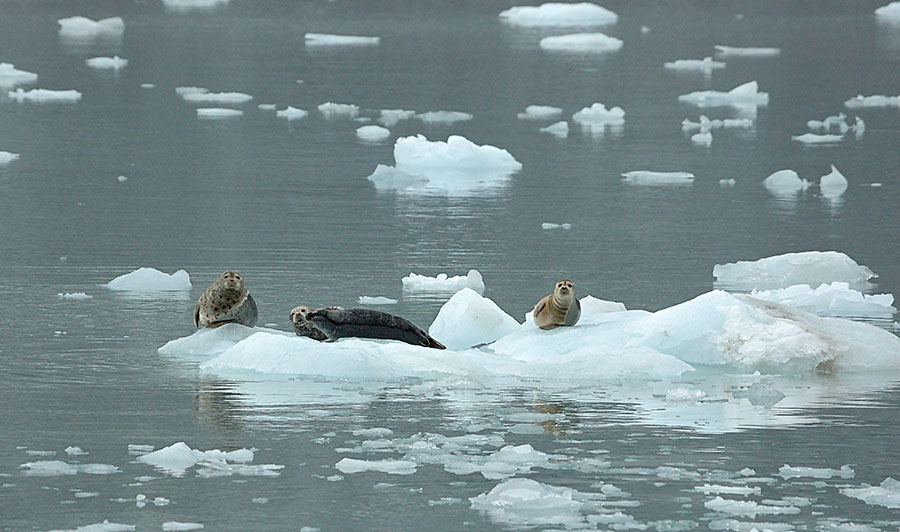 We had a number of great grand adventures in the ice, exploring just a few of the glaciers in the park. 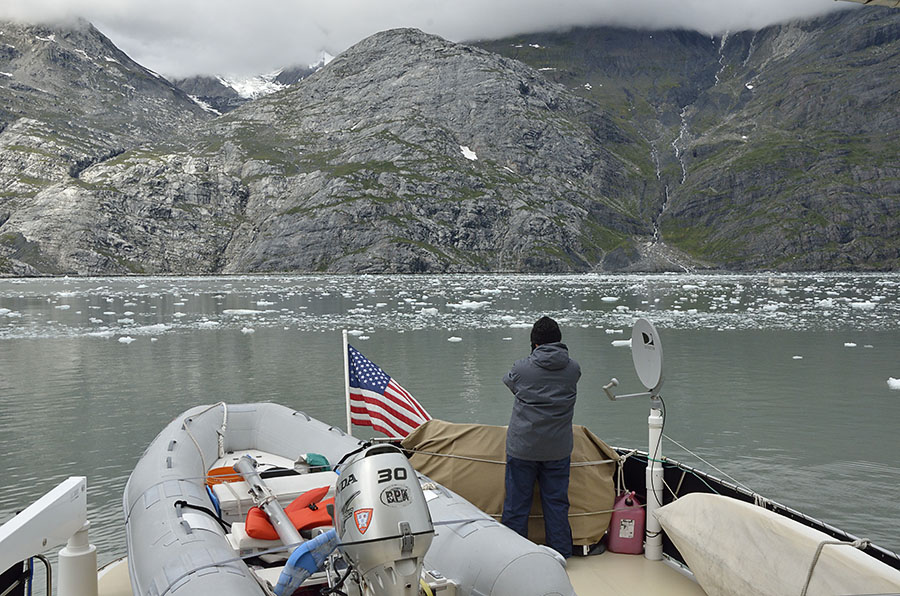 Of course we had to scoop up a few small pieces of glacier ice for our evening cocktail, and of course I had to put some key lime juice from the Florida Keys over the glacier ice to celebrate the distance we’ve come. 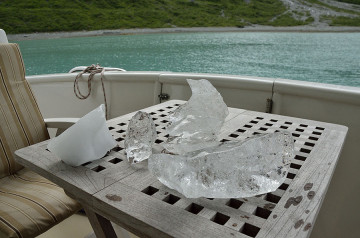 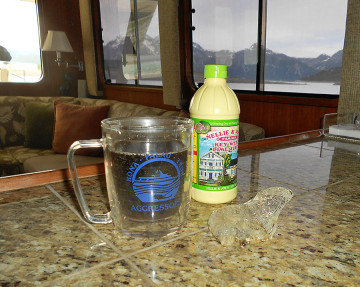 3 thoughts on “Exploring the Ice – About Glaciers”