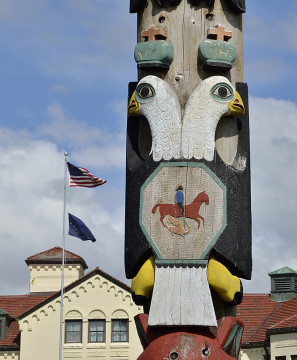 Sitka is located on the west side of Baranof Island in Southeast Alaska (the “panhandle”), first occupied by the Tlingit native people more than 10,000 years ago.  In 1799 Russia established a community here to serve as a trading center for the Russian-American Company, in conflict with the Tlingits.  A Russian Orthodox church was built in 1842, and the parish of St. Michael is still active today.  The totem in the middle of town recognizes the Russian influence on the development of Sitka with the double-headed eagle among more traditional animals. 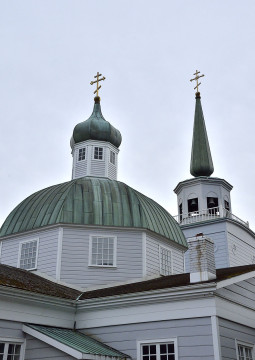 The Russian Orthodox church looks small and modest on the outside, but inside it glitters with elaborate icons and church symbols.  The priest was warm, welcoming and informative, telling us about customs such as the lack of pews – the traditional Sunday service is 2 hours long and parishioners either stand or kneel. 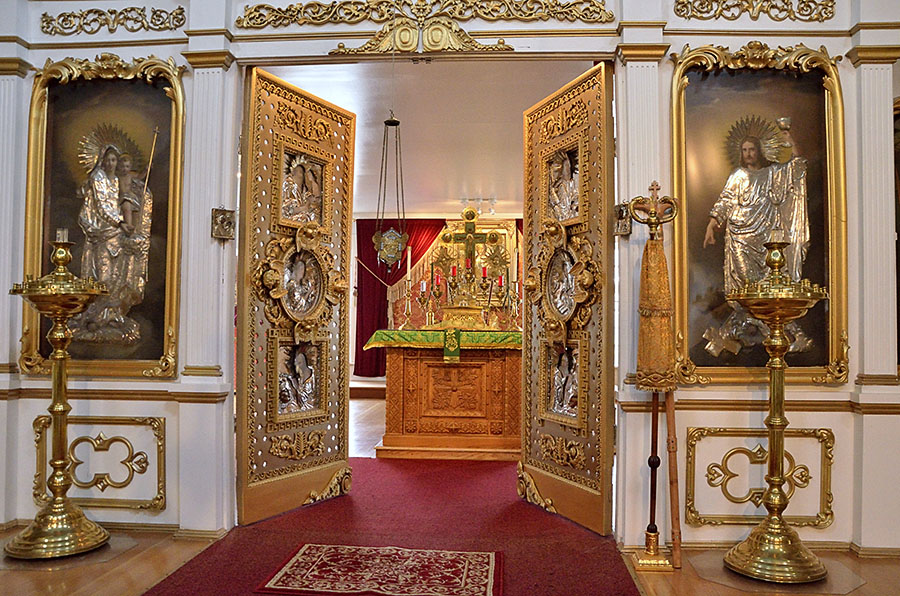 We learned about the church’s icons and how much information they convey with facial expressions, position, gestures, etc.  In many cases they are rendered in 3-D by use of sculpted metal, except for a person’s skin.  They keep the images of people such as saints depicted in 2-D so they can not be worshiped as idols, which explains why the icon’s metalwork is cut out around hands and faces.

A famous Russian Orthodox bishop was sent to be the Bishop of Alaska, headquartered in Sitka.  Bishop (now Saint) Innocent arrived sometime around 1840, and the church built a house for him that has now been restored by the National Park Service.  Innocent was interested in education, and he learned many languages of the various Alaskan native tribes – here in southeast, as well as the interior and out to the Aleutians.  He created dictionaries and translations for the Alaskan people, as well as scholarly works about Alaskans.  He had a deep respect for the Alaskan native cultures, and felt that their customs and beliefs did not conflict with the teachings of his church.  He was widely loved for his open mind and kind heart, and many natives were drawn to the church because of the spirit of inclusiveness created by Bishop Innocent. 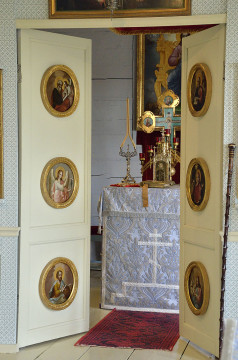 We were relaxing on the seawall after touring around town one afternoon, and Jim happened to be wearing a sweatshirt from the University of Utah.  Two gals walked up to us and asked us about the shirt, and we told them that we went to the U for grad school.  We got a big high-5 from one of the gals – she is a fellow “Ute”, and the other gal admitted that she was from Brigham Young University – a “Cougar”, arch rival of the Utah Utes.  We had a lot of laughs with them, and it’s always so nice to talk with other humans.  They described some of their lives as Mormon (LDS) missionaries, and some of the rules they live by can be a little like our lifestyle on the boat in remote places… so we had some more laughs about that.  We promised to blog about these two lovely gals – Ali and Paige – thanks for making our day!  (We loved the appropriateness of the sign…) 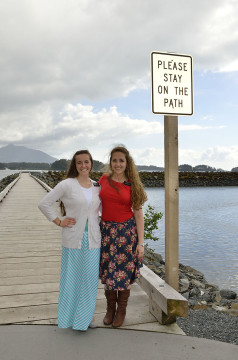 The next day we took a longer walk to visit the Alaska Raptor Center – a rescue and rehabilitation facility for eagles, owls, and other types of hawks.  It’s a terrific facility, with birds that are healing and expected to be released that are kept in an area that insulates them from humans.  There is also a small population of permanent resident birds that have injuries or conditions that prevent them from being able to survive in the wild. 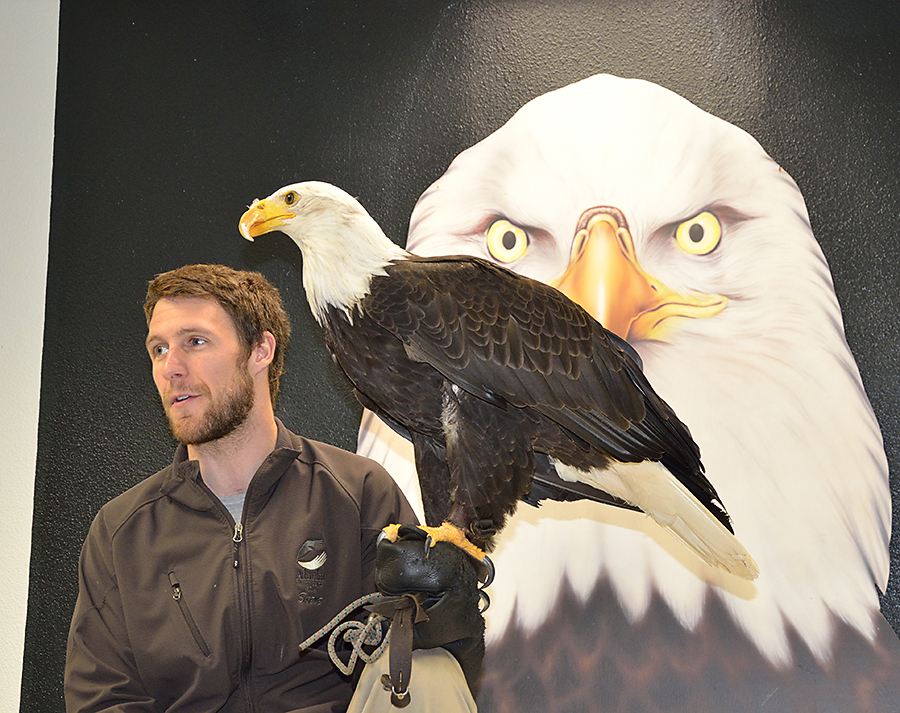 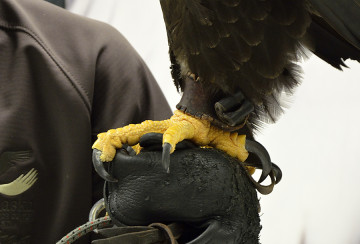 This is Steve, a full-time expert who works with the various birds, holding Hallie, an eagle with a beak defect that would be fatal in the wild.  It was wonderful to get so close to this magnificent bird and to learn more about them.  I would not want to be on the receiving end of those talons!

We ended up talking with Steve about different birds for quite a while when we first met him near the outdoor enclosure for the two resident ravens.  Ravens are very smart, and they like shiny things.  Apparently wild ravens often visit, trading various shiny things with the residents.  Ravens also have a large number of vocalizations, and we learned that there are dialects of raven sounds, passed on from parents to children.  The whole experience was really interesting, and we enjoyed seeing some different owls and hawks up close.  It’s sad that they are not releasable, but they have a good home and the love and care for the birds is obvious. 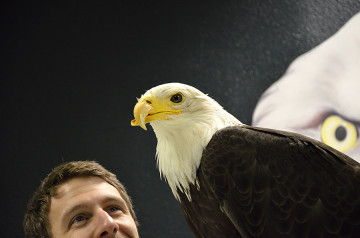 Walking back to the boat we loved to look at the flowers in everyone’s gardens.  With the long hours of sunshine (most of the time!) flowers grow very big here. 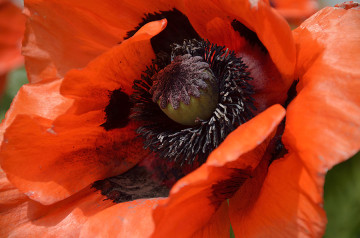 There’s such a variety of flowers from the huge showy anemones as well as the delicate bleeding hearts. 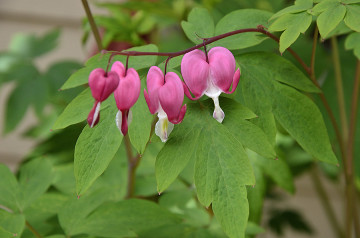 And just to complete the bird theme for the day, Jim spotted this red-bellied sapsucker for me. 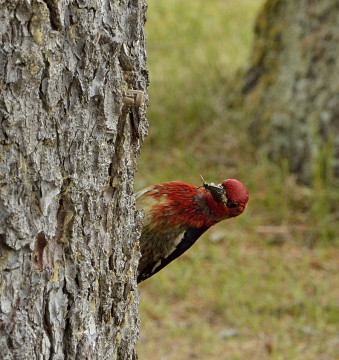