The Misty Fjords National Monument comprises over 2,000,000 acres of land in southeast Alaska near Ketchikan.  It is a dramatic area with glacial cut contours – the mountains soar 2000-3000 feet or more, and the steep walls drop straight down into the ocean to 1000′ deep.  One day we’ll explore some of this area by boat, but it can take a while since places shallow enough to anchor are few and far between.  With the availability of float planes offering flights over the fjords, we decided to treat ourselves to an aerial view.

Draped with cameras, video gear and binoculars, we joined three people from one of the cruise ships for the 2 hour flight in a deHavilland Beaver – the most ubiquitous of the hard-working float planes here in the northwest.  We were flying over the mountains in just a few minutes, marveling at the miles of ocean shoreline as well as many of the estimated several million lakes in southeast Alaska.  This is Punchbowl Cove below, and the yellow streaks on the water are from Sitka spruce pollen. 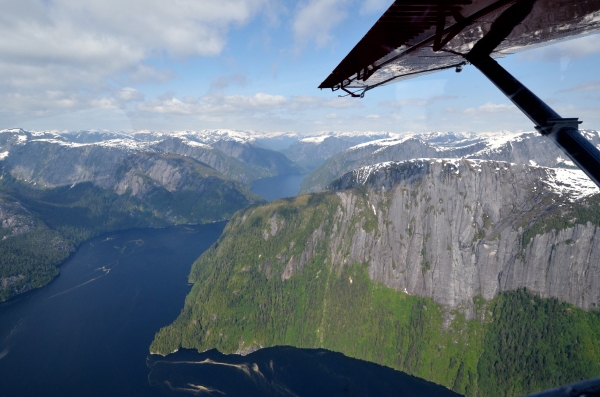 The plane had headsets and microphones in case we wanted to talk to the pilot, but the view was so indescribably beautiful that no one could utter a word – we were quite literally, speechless. 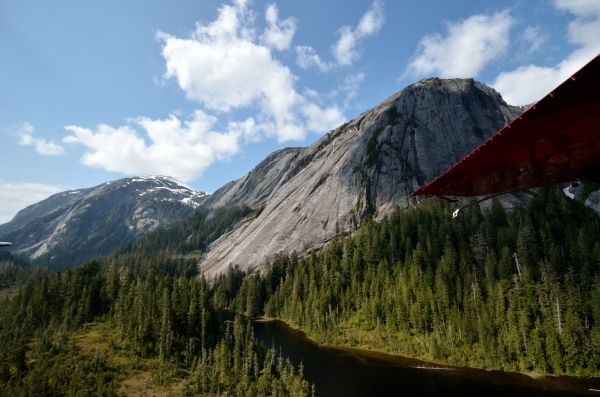 After a bit of flying we landed on a lake in the middle of the mountain peaks.  There were small waterfalls around the sides, and snow right down to the water’s edge. 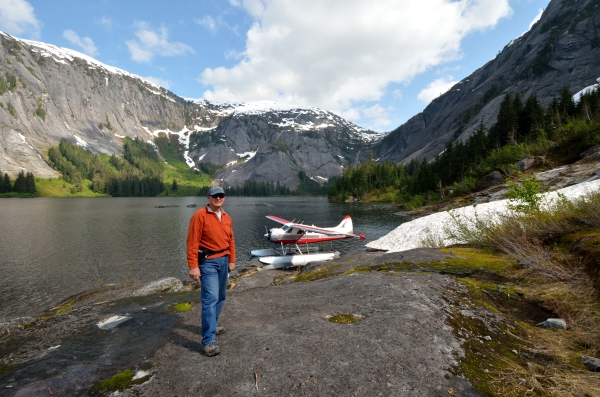 On our way back towards Ketchikan we saw a mountain goat – a slightly creamier white than the surrounding snow.  In other places we could see lots of tracks in the snow.

The flight was superb – we saw and learned a lot, but it was over too soon!  As we headed back into Ketchikan we flew over the basin where ADVENTURES was docked, and you can see some of the massive cruise ships nearby. 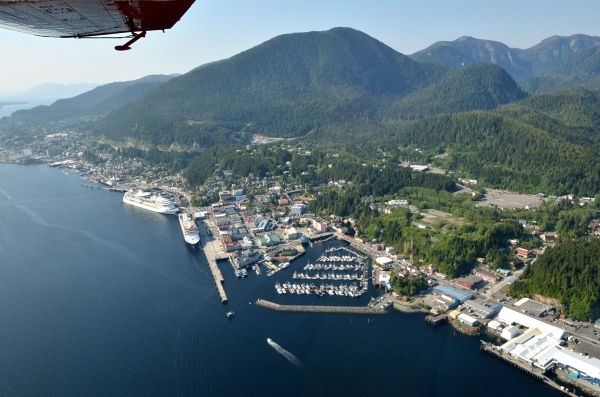 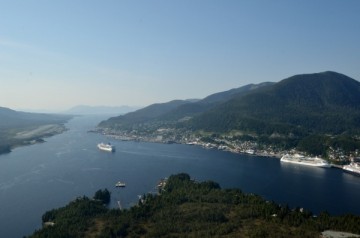 This ship is heading north through the Tongass Narrows, where we will be heading the next day.  It’s hard to see in the photo, but on the far left edge is the Ketchikan airport, across the Narrows from town.  You have to take a little ferry to jump across if you need to catch a flight. 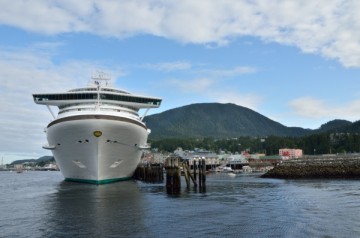 We met up with our friends on the Krogen for a drink and then headed out to dinner in town, enjoying the quiet after all the cruise ships were gone.  The next morning we departed, making sure there weren’t any cruise ships trying to dock as we were trying to leave!  The photo just doesn’t convey the mass of these floating hotels.