Leaving Vancouver we had to wriggle through the large ship anchorage in English Bay where over a dozen ships were waiting for their turn to enter the port and load up.  You can see how empty the ships are – all the red is bottom paint that should be submerged when the ship is fully loaded.  From there we stopped for a night at a Provincial Marine Park where we enjoyed the warm sunshine and took a long hike – it may have been the warmest day we’ll have this summer!  The long hike was a good way to shift gears from the big city to wilder places, which I prefer.

Our next destination was Princess Louisa Inlet – a favorite spot from last summer’s cruise. 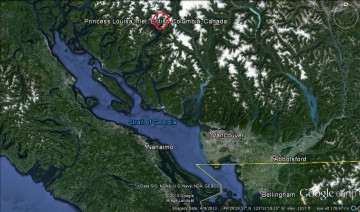 As the raven flys Princess Louisa (circled in red) is not far from Whistler ski resort and it’s about 70 miles from Vancouver, but as slow boats go we had to travel a fairly long way to get up there.  As we traveled north the mountains got taller and much more steep, and the water got deeper – down to 2000′ in one place.  These are fjords cut by glaciers and they are dramatic.  Not only is it a long trip with nowhere to stop along the way, but there is a short rapid through a blind S-curve that must be navigated at slack current to get up into this last, most special fjord named Princess Louisa. 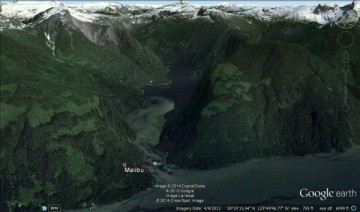 We came up here last July because we had heard this was a must-see place, and it proved to be very true.  It is very hard to find the right superlatives to describe Princess Louisa – the word “magnificent” seems woefully inadequate.  We vowed to return in the spring when the countless waterfalls are running hard with the spring runoff, and this visit surpassed our expectations.  The sound of the largest and closest – Chatterbox Falls – is a persistent roar, and the cloud of mist erupting from the falls rises higher than the falls themselves.  I counted at least 16 different waterfalls just near the head of the inlet, and we’ve been told that there are 66 in all – I believe it. 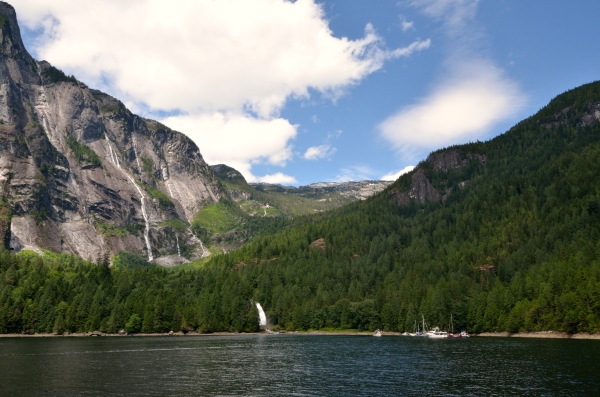 Note how tiny the boats are in the lower right part of the photo – there’s no way to describe how BIG it all is.  We came up here to spend a few days savoring the views and soaking up the majesty of it all.  There isn’t a lot to do up here – there are some short walking paths to the sides of the largest waterfall and an incredibly strenuous hike to an old trapper’s cabin high up the mountain face.  Kayaking is a perfect way to explore around the edges and investigate many of the other falls, but otherwise this is simply a place to sit quietly and take it all in. 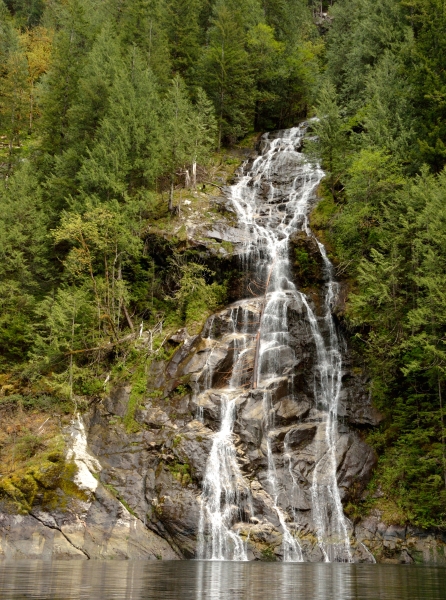 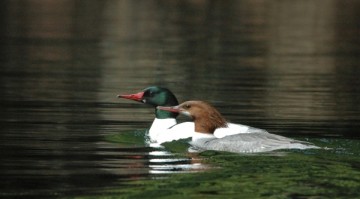 We saw a lot of wildlife, though we never saw the mother black bear and her two cubs reported by others on the dock.  We did see a beaver swimming one evening, as well as lots of these mergansers and a number of harlequin ducks, particularly down by the rapids at the mouth of the inlet – they liked to fish in the brisk current. 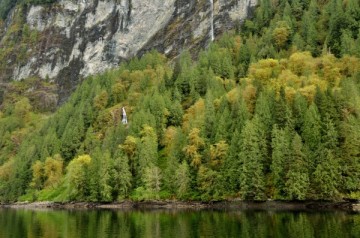 Although the trees are mostly evergreen (Douglas fir, western red cedar), there were some clusters of deciduous trees in their lighter spring green (notice the two waterfalls in the photo – they are not small!).  In the forest there were tiny wildflowers in bloom, and the ferns were unfurling their fiddles to reveal new miniature leaves. 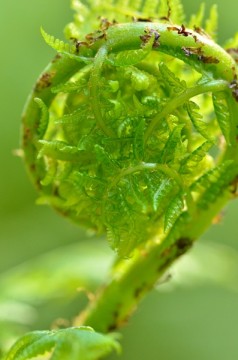 We wrapped up our visit with a little tour of the Young Life camp down at the mouth of the inlet – it’s an old resort that was abandoned and taken over in the 70s as a fantastic youth camp.  They told us about how John Wayne liked to come up to Princess Louisa in the 40s with his big yacht, as well as a number of other wealthy and famous people.

We hated to leave, but it’s time to move on.  Our next adventure is to run through the series of rapids to get us up into the Broughtons where we can start looking for a weather window to get around the aptly named Cape Caution.